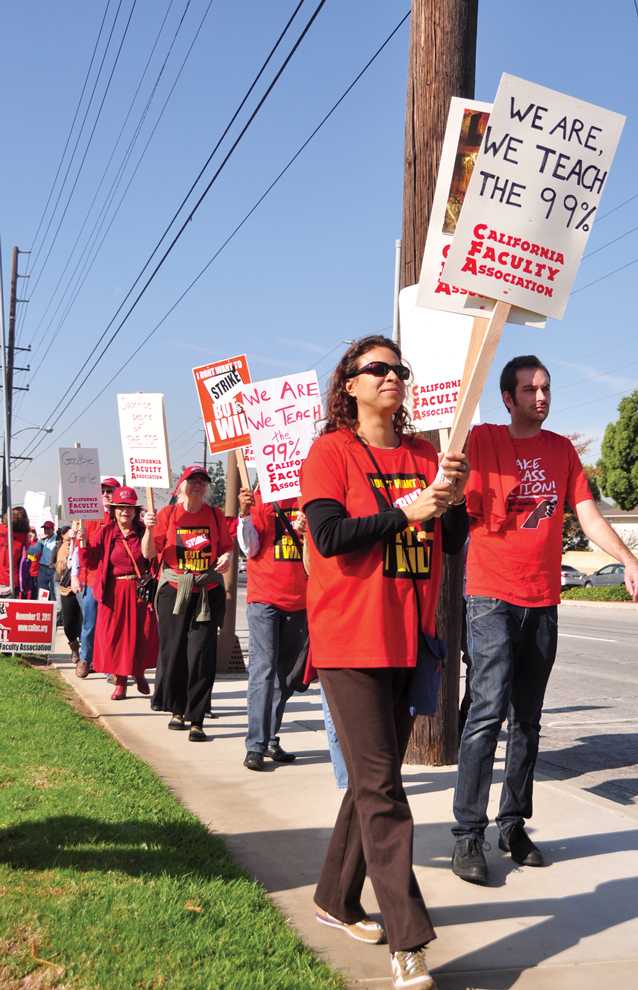 “We’re all part of the same thing”

After talks with the CSU and holding an informational picket at all 23 CSU campuses, CFA President Lillian Taiz rallied about 80 faculty members and students to hold a one-day strike against money mismanagement at CSU Dominguez Hills Thursday.

“We are here to protect middle-class jobs, we’re here to ensure that our students become middle class and we’re all under attack,” Taiz said. “We’re under attack by folks who believe that they are part of some special group, some 1 percent that includes the chancellor and unfortunately some of the folks on the board of trustees. They are obsessed with the presidents and their executives, and they are hiring for incredible amounts of money.”

Taiz compared the faculty members on strike to Occupy protesters across the globe, saying that they are tired with Chancellor Charles Reed not giving the CFA what they want.

“It’s really important for us to be out here and make our voices heard and be part of the voice of the 99 percent. We’re all part of the same thing,” she said.

Though the strike only lasted for one day, Taiz said it is likely that another strike will be held next semester.

“Well if we don’t get heard, then it keeps going. We are hoping that the chancellor will be reasonable, hoping that he will refocus his priorities to pay attention to needs of the folks in the trenches, but if not we’ll just keep going,” she said. “He’s using students, faculty and staff like they’re ATMs. (Wednesday) they raised student fees another 9 percent. How far can this go?”

Nate Thomas, CTVA professor and president of the CFA chapter at CSUN, arrived on the CSU Dominguez Hills campus at 6 a.m.

“This campus is closed today. There are no classes at Cal State Dominguez Hills today,” Thomas said. “Unfortunately, it’s a concerted action that is disrupting the normal operation of the system, and that’s what we have to do to get their attention in Long Beach at the chancellor’s office.”

Thomas had a list of items he wanted to see fixed by the CSU.

“We hope to get a contract. We hope to get treated with respect. We hope for them to stop playing games. We’d hope they’d stop misusing the funds and lining their pockets for all their administrators and start putting the money back into the classrooms,” he said. “We would hope that this would end today, I know I would, that we can go on and teach and just move on. Nobody wants to do this. Nobody is happy about having to do a strike.”

Thomas was accompanied by a dozen or so CSUN professors, who took the time to support their fellow CSU professors across the state.

“Canceling classes was not an easy thing to do”

“I think it’s unfortunate that a lot of salary increases have been to persons who are not integrally involved in the classroom,” said Charles Walker, a speech professor at CSU Dominguez Hills. “Teaching is a very demanding profession and I really don’t think (the faculty) were asking beyond that which is deserved.”

Walker was put in a difficult situation when the CFA decided to hold the strike on his campus.

“I was in a dilemma, because (students) pay for classes and then you cancel classes, but the big picture is for the student because we are employed by the student,” he said. “So if this overall objective is to get better pay and better quality, it assists the students and the faculty at the same time. Canceling classes was not an easy thing to do.”

Making his way up north with other faculty members from San Diego State University, Alex Farnsley, a film professor, was fed up by the CSU’s mistreatment of faculty.

“I’m the guy that gets cut one semester, comes back and teaches two classes with two-week’s notice and gets cut the next semester. So I’ve really been bounced around a lot,” he said. “I enjoy (teaching), but I’m getting a little tired and a little discouraged by the treatment that the lecturers get.”

Finding himself either as a full-time or part-time lecturer, Farnsley has been affected by the decisions made by the CSU and San Diego State.

“When I did have a one-year contract, one semester into it, they claimed that the budget cuts were necessary for them to cut me. Now they’re starting to have graduate students teaching classes,” he said

Though Farnsley took his time to make the trip from San Diego, he fears the strike will not be enough.

It wasn’t just faculty members lining the streets in front of CSU Dominguez Hills. Students from the campus united with their professors to voice their thoughts.

“I understand that there’s hard times right now, but it’s a little bit of a slap to the face when you say there’s hard times and you see the mismanagement of money,” said Shaun Sanders, a business management major at CSU Dominguez Hills. “There seems to be a lot of slack that could be given to sort of rectify things, but instead of talking about it and trying to find a consensus, you just have them telling the teachers no and putting them off for a few years and we’ll give ourselves raises. It’s just kind of disgusting.”

Janelle Freeman, a kinesiology major at CSU Dominguez Hills, was happy to see that her professors were taking action.

“I hope that the people high up will see that the students and the faculty are serious about this. They can’t just keep doing this for years and years.

Sanders thought it was refreshing to see many people on his campus protesting against the same issue.

“Everyone kind of knows that there’s an issue, but to really see people come together like this, it’s nice because it shows that there is support,” he said. “Overall, I would hope that the administration would feel a little bit of shame that this is what it’s come to.”