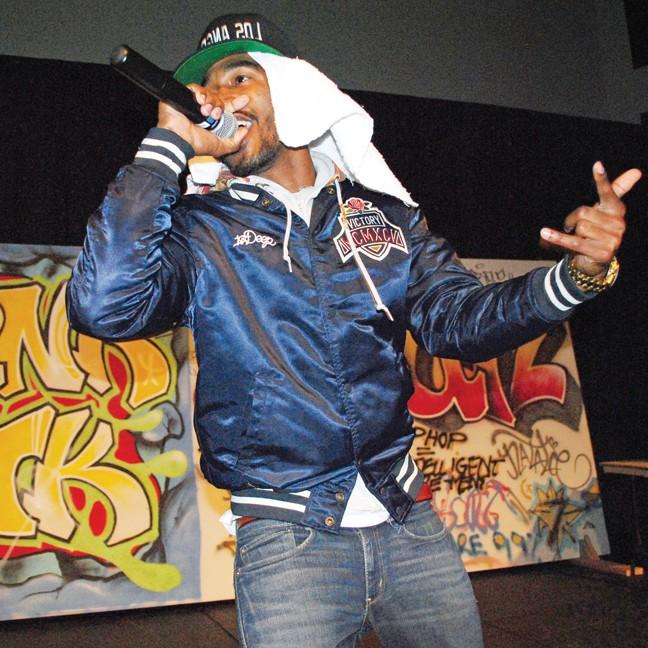 This weekend’s first annual academic hip-hop conference, “LA Hip-Hop: Beyond Gangster Rap” attempted to bridge the gap between the negative portrayals of the music genre and its beginnings as a grassroots form of self-expression.

The workshops and lectures served to show that not only can hip-hop fuel academic dialogue through its history and intricacies, but also through the creative acts of actually making music, said CSUN Pan-African studies professor and Hip-Hop Think Tank faculty advisor Anthony Ratcliff

“There’s different ways of learning,” he said. “If you can bring the culture into the academy, that’s what education should be.”
The conference was organized by students and faculty members of CSUN’s Hip-Hop Think Tank.

Two hour-long breakout sessions encouraged participants to look past the promotion of drugs, money and women in mainstream media and focus on the complexities of hip-hop.

“We want to expose the campus community to the fullness of hip-hop,” Ratcliff said. “Hip-hop is a lot more creative and diverse.”

The event was kicked off by a brief history of hip-hop and its roots in activism by graduate student Ayk Terjimanian.

“It’s not about sitting back,” Terjimanian said of hip-hop. “It’s about performing, participating and getting involved.”

Four elements made up hip-hop when it was first finding its identity, Terjimanian said. They were graffiti art, the birth of the DJ, B-boys and B-girls, or breaking, and the MC-rapper, all of which were covered in two hour-long sessions of speaker panels and workshops.

“The foundations of hip hop are peace, unity, love and having fun,” Terjimanian said.

During the first breakout session, attendees had the option of sitting in on panels discussing activism, hip-hop, health and sustainability, or industry basics.

“You have to be consistent. You’re building a fan base,” hip-hop manager Chris London said during the Hip-Hop Industry 101 panel. “The people have to trust you’re going to keep producing good music.”

Attendees could join panels on gender and sexuality in hip-hop or underground hip-hop, or learn how to break, or what it takes to successfully create beats.

Dr. Malina Abdulah of CSU Los Angeles spoke directly to the claim that hip-hop objectifies women during the gender and sexuality panel.

“I think those are relevant statements for corporate-controlled hip-hop,” Abdulah said. “It’s used to program you to think a certain way.”

Groups, such as TLC, were vital to give women positive, strong-willed artists to look up to using hip-hop as the medium, she said.

“It’s a way to voice our discontent,” Abdula said. “It’s the voice of our generation.”

Producer Quinton Johnson and rapper Bryson Wallace showed students and faculty how to create music starting with their own ideas.

“It’s not just about cars, girls, clothes,” Wallace said. “It’s the beauty of it, music that makes you nod your head.”