Unified We Serve collect food and clothes for families in need 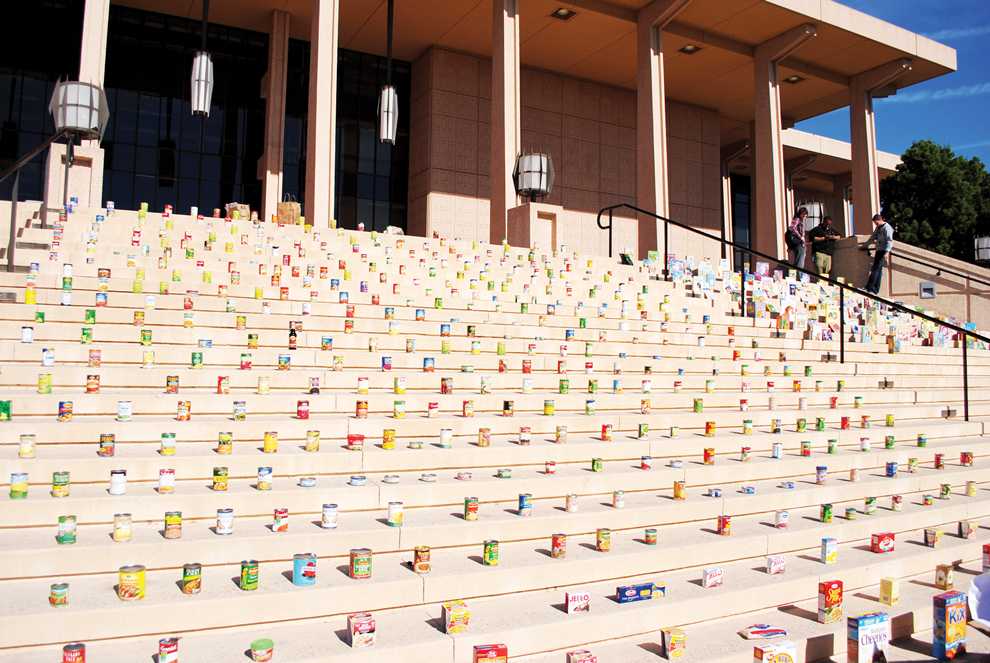 Thanks to volunteers and donors, Unified We Serve beat last year’s total number of collected items during the Third Annual Campus Clothing and Food Drive.

In spite of this achievement, however, the program’s set goal of 30,000 items was not met during the two-week charity event.

The items collected will go to the Meet Each Need with Dignity (MEND), a Pacoima-based non-profit organization that serves over 31,000 individuals per month.

Some of the items were displayed on the Oviatt Library steps Thursday afternoon.

The items were scheduled to be on display for 24 hours on Wednesday afternoon, but was cancelled due to weather conditions.

The display was intended “to show CSUN students the impact they themselves have on the community,” said journalism major Talar Alexanian, the program’s events assistant.

As volunteers placed items on the steps, people came by to drop off last-minute donations and others stopped to take a look or capture a photo of the display.

“It’s cool because it shows that people actually care,” said Juan Gonsalez, freshman criminal justice major. “Seeing it, I wish I could have given more.”

There were many locations around campus where anyone could have dropped off items in labeled trashcans, two drive-thru drop-off locations in parking areas, and three big containers.

“People would feel bad about just donating one item, but every little thing counts,” Alexanian said.

Alyssa Clark, sophomore journalism major, was one of the drive’s volunteers.

“Honestly, I felt like I never really helped out or made an impact on anyone’s life,” Clark said. “Being part of Unified We Serve – I feel like I’ve made an impact, even in the slightest way.”

Dormitories, campus departments, and student clubs and organizations also participated in the food and clothing drive, a tactic, Alexanian said, that was different from previous years.

“We headed out to a lot of different clubs and organizations, departments and dorm buildings… definitely a unified and united effort,” Alexanian said.