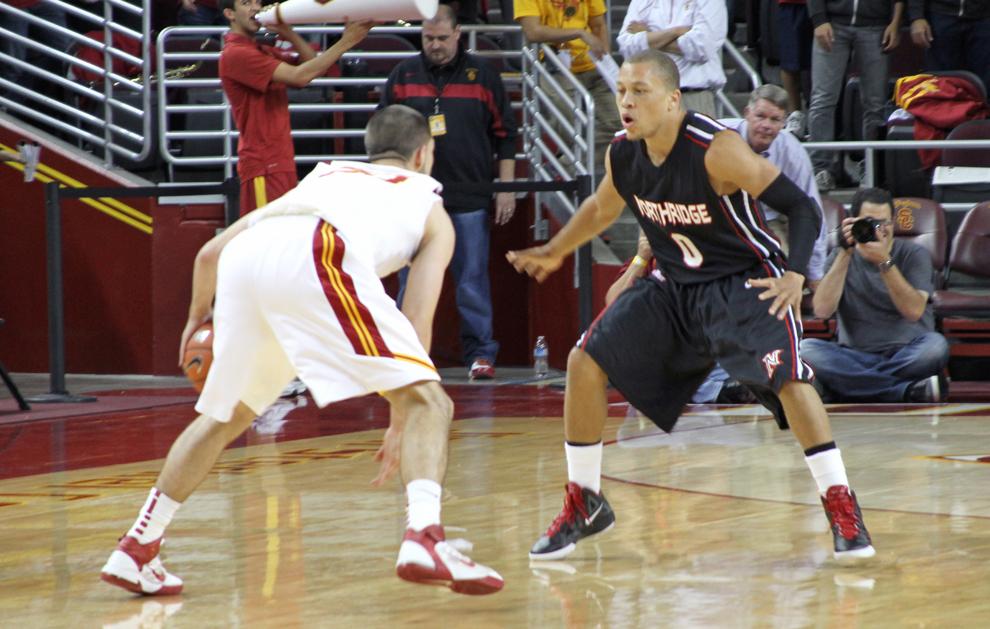 The Matadors seem to be going backwards three games into the young season.

Three days after putting up a valiant fight in a season-opening 66-59 loss at USC on Nov. 11, CSUN travelled to Hawai’i and was handed a humbling 86-67 defeat.

Then on Saturday, Boise State bulldozed CSUN (0-3) by 42 points.

“Our defense wasn’t on top,” CSUN guard Vinnie McGhee said of the 103-61 loss to the Broncos. “We weren’t boxing out, we weren’t rebounding, so that killed us.”

CSUN was out-rebounded 49-21 and sent Boise State to the free throw line 38 times. It was a cold nightmare in freezing Idaho that left McGhee feeling under the weather Monday before practice.

But with the Matadors hosting San Diego Christian in their home opener tonight, it may be best not to dwell on the ugly loss for long. Just ask McGhee’s backcourt mate Josh Greene.

“We take it, learn from it, we soak it in,” Greene said. “But we don’t hang our heads because we have another game. We got to use (the loss) as motivation and come back hungrier.”

Greene could use the quick turnaround. The sophomore hasn’t had the season he’s expected so far. On Saturday, Greene took six 3-pointers and only made one. The second-year player is only 2-for-17 in threes this year.

Greene feels his struggles will go away once he stops trying to do too much.

“It’s just me not playing basketball,” he said. “I got away from just playing my game. I’m thinking too much on the court.”

Playing at home might be just what the guard needs. The last time CSUN took on a rival at the Matadome (Nov. 5) Greene went 5-of-7 from the field, 4-of-6 on 3-pointers.

The Matadors beat the Lancers 86-51 then. It was only an exhibition game, but also a showcasing of what the young CSUN squad can do when its offense is flowing.

The rival of turn tonight, the Hawks (1-1), plays in the Golden State Athletic Conference of the NAIA. While they’ve played seven games already this season, only two of them counted officially. Their unofficial record is 2-5.

The Haws are led by guard Benji Arvizu and, much like the Matadors, they’re a small team. No player on San Diego Christian’s active roster is taller than 6-7.

San Diego Christian won’t exactly be CSUN’s biggest challenge of the year. If anything, the Hawks could be just what the doctor ordered to get Greene and his teammates out of their three-game offensive slump that’s seen them make only 32 percent of their shots.

Not everyone is shooting poorly, though. Redshirt freshman guard Stephan Hicks has been brilliant through three games and is averaging a team-leading 21.3 points per game.

Hicks hasn’t gotten much help with the scoring load yet, but he is confident it’s coming along. And he has particular faith in Greene.

“He’s not really shooting well right now,” Hicks said of Greene. “But we just tell him to keep shooting. He’s going to make those shots. The balls will eventually fall.”

The 6-foot-5 Hicks is also the Matadors’ leading rebounder, averaging 10 boards per game.

“All five guys on the floor need to rebound the ball,” he said. “Not just the bigs.”

Hicks figures the ball will bounce the Matadors’ way at the Matadome. So does the hoarse-voiced McGhee, who’s looking forward to playing in front of the Northridge crowd.

“We need this (home game) right now with the way things have been going on the road,” McGhee said. “We need to get home and get in the flow of things.”