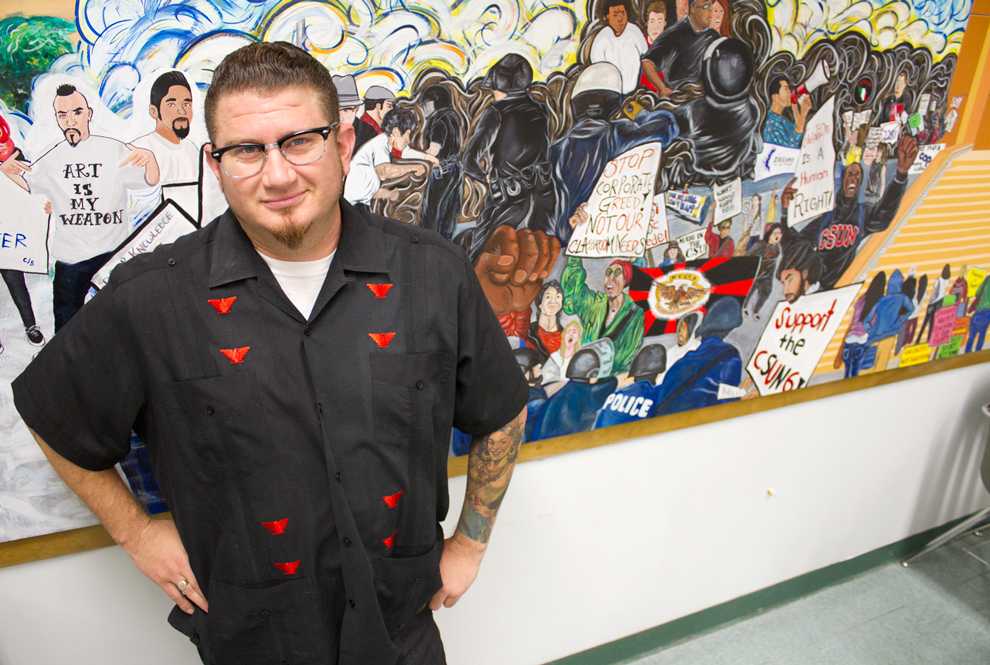 Los Angeles murals depict the diversity of the city – from Chicana/o murals rich with vibrant colors and cultural roots in East Los Angeles, to the walls of stylish graffiti art in South Central Los Angeles, and the larger-than-life-sized portraits of the Los Angeles Chamber Orchestra looming over the harbor freeway.

Since 2002 , the L.A. city council and the department of building and safety said the existence of murals on private property is illegal, erasing existing murals and threatening to fine muralists and property owners for creating new works.

This shift came not from urging of the council itself, not from the members of community where the art existed, and not from groups who found the art offensive. Objections came from billboard businesses who felt art was equal to advertisement, filing a lawsuit insisting that murals were unfairly free of the regulation their billboards had received, according to an L.A. Times article.

The city council has been loosening ordinances that have created a mural moratorium in the city.

This is how muralists attending CSUN are reacting.

Instruments of instruction and peace

With only a year of experience under his belt,  muralist Miles Lewis has yet to work on a mural on a private building. Instead, the 22-year-old printmaking major has worked with children to create public murals on school buildings, an experience that taught him the importance of public art.

“The case for murals in Los Angeles differs immensely from other cities where you can have Chicano murals, scenes of southern American culture, that serve to solidify an identity,” Lewis said.

Though his work is not political or representative of his beliefs, Lewis has learned that public art can affect kids as well as adults.

“Public art that people can support and orbit around in public spaces are like monuments to peace,” Lewis said.

On her website, Judith Baca, artist and activist, writes that 60 percent of murals are being lost to graffiti and vandalism by kids who receive no art or mural programming – something Lewis feels art education, especially creating murals, can help change.

There must be a distinction between private and public property when painting them, however, Lewis said.

This argument is what allowed the Business and Safety Department to force owners of private property to paint out the murals a Valley Village resident commissioned due to the threat of a $1,925 fine, the Los Angeles Times reported.

Los Angeles murals, like the city buildings they are painted on, should be catalogued, with the option to keep or remove chosen by the community, Lewis said.

“Unless the community finds it offensive or complains, I don’t see why you would remove it,” he said.

Murals have become part of architecture and like classic buildings and theaters, they are part of Los Angeles history and the community needs to be involved in the decision to destroy them, Lewis said.

That has not been the case in recent instances.

The LA Times reported the case of actress Julie Newmar, who in April, unbeknownst to her, had her fenced property broken into by city contractors who proceeded to remove a mural she commissioned.

To Elvia Aguirre, 27-year-old art major and muralist, incidents like these are disrespectful to the muralists and members of the community who helped create these works of art.

“There is a process to painting murals, we don’t just pick a wall and start,” said Aguirre, who has worked on murals at CSUN as well as LA Mission College. “To just wash it out is disrespectful to the artists involved and to the owner who commissioned the piece.”

Aguirre, who worked on the recent Jerome Richfield Hall mural, focuses on historical women and current issues as themes for her art.

She described creating a mural as an ordeal, from getting approval, filling out the proper papers and dealing with commissioners asking for changes to the finished products.

Art is extremely important, and murals serve to beautify, educate and unite, Aguirre said. Often the guidelines or restrictions placed by commissioners are enough for an artist to walk away from a project.

To have them erased after everything has been worked out and the piece is completed is infuriating, Aguirre said.

Muralists are angry, as shown by lawsuits against the city by artists Frank Romero and Kent Twitchell in recent years. The American Civil Liberties Union (ACLU) has even represented muralists in the past.

“They’re erasing our work and the work of the community involved in painting the mural,” Aguire said. “Erasing history like that is an injustice.”

The city should be less involved and allow the community to create murals if they want to, Aguirre said.

Bringing murals back and redefining the law

On Nov. 26, 35-year-old Chicana/o studies graduate student Jake Prendez and a crew of about 15 people will be heading to Guanajuato, Mexico, to paint a mural at the Buen Pastor (Good Shepard) women’s shelter after almost a year of planning.

“Over two weeks we will work on the mural while giving art lessons to members of the community,” Prendez said. “It’s great that we can bring this art to Mexico, but we need to be able to revive this art form back in our own country and bring it back at a local level.”

Prendez also works with Mobile Mural Lab, a group which brings blank mural canvases to communities in white vans, which he described as civil disobedience against the mural moratorium.

“Murals are the most authentic form of art,” said Prendez, who has spoken to the city council with fellow muralists. “We put away our egos and give the brushes to the community and ask them to be a part of it.”

There is mixed communication with the city council. They think we want graffiti all over the city when we don’t, Prendez said.

“Community murals deter vandalism. With a vested interest in the mural, members of the community will be less likely to ‘tag’ over it,” he said.

The issue has and will continue to be that the city classifies murals as signs, Prendez said. As signs, the city is responsible for them and is forced to be involved.

“The city and muralists need to collaborate to maintain these works. Leaving it up to the city alone results in wash outs,” he said. “Muralists need to get involved so that murals can get out of the wrong department and get out of being treated as signs.”