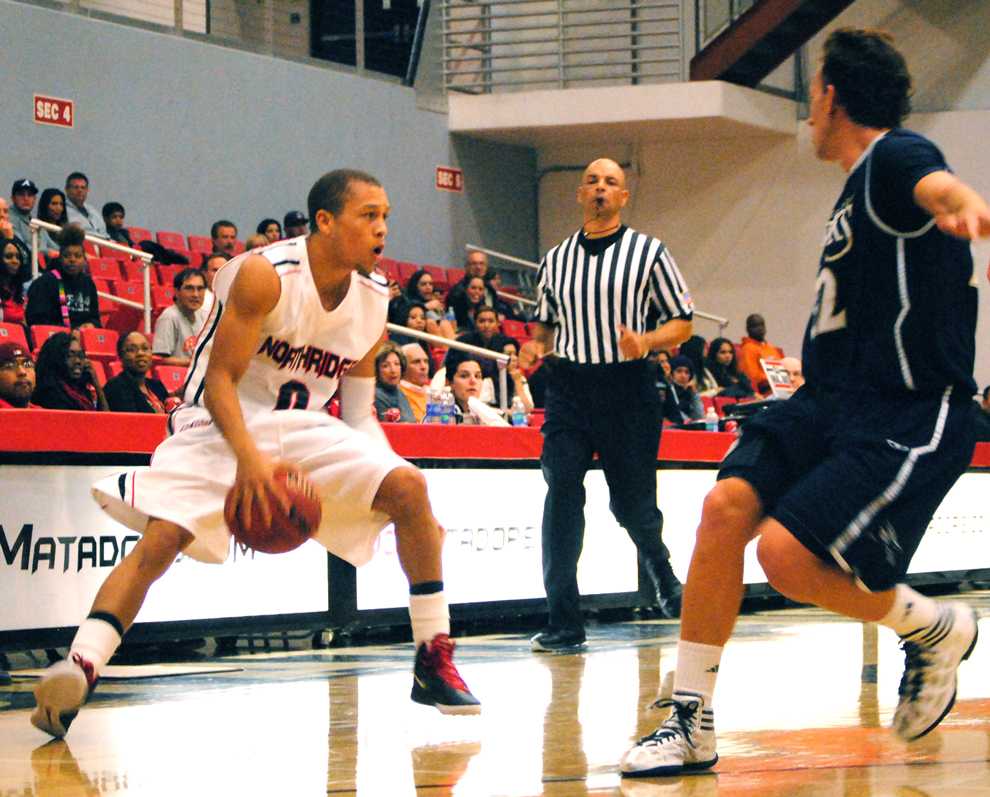 Even as the Matadors (1-3) were beginning to run away with what eventually became a 95-68 win against overmatched San Diego Christian, Greene kept struggling. He’d missed every shot he’d taken and was lowering his field goal percentage for the season to unholy grounds.

Funks don’t last forever, though. Greene did plenty of shot-making after his early misses and led the Matadors with 20 points in another successful home opener for head coach Bobby Braswell, who’s now 14-2 in games of the kind.

Greene ended up shooting 8 for 18, but his most impressive stat of the night, he said, was his eight assists. In fact, he seemed lackadaisical about the fact that he snapped out of a scoring slump that had him as a 12-percent shooter coming into the night.

“My focus today wasn’t to shoot the ball, it was rebounding and finding my teammates,” said Greene, who also had four rebounds.

While Greene and CSUN won more than handily, they only shot 40 percent from the field. But Braswell said he couldn’t care less how well his team does offensively as long as his defense is holding up.

In this game, it did. CSUN held the Hawks to 31.9 percent shooting.

“I’d much rather shoot 40 percent and win a game than shoot 50 or 60 percent and lose basketball games because we can’t stop the other team from scoring,” Braswell said.

Not only did the Matadors force the Hawks to take difficult shots – many of them looked like they belonged in a Globetrotter act – they also forced the ball out of their grasp. San Diego Christian had 22 turnovers. CSUN transformed the takeaways into 29 points.

CSUN’s defensive effort wasn’t immaculate, however. Following a 42-point loss at Boise State in which the Broncos out-rebounded the Matadors 49-21, Braswell challenged his team to up its hustle for the ball. CSUN won the rebounding battle against the Hawks 49-40, but the “extra effort” played a part in SDC going to the free throw line 47 times.

The Hawks made good in 32 attempts. It was almost half their scoring total for the night.

“That’s a sign of bad defense, no doubt about it,” Braswell said. “When a visiting team comes into your gym and shoots 47 free throws, that’s not officiating, that’s just bad defense.”

Greene was quick to recognize SDC was not the most formidable opponent they’ll face this season, but said just “having a win on the win column” was a confidence builder.

“Before when I would miss a shot, when I was going through my slump, it was just like, ‘Dang, I gotta make the next shot,” Greene said. “But now it’s just like, as much work as I put in, I know if I just keep shooting with confidence, one’s going to go in sooner or later.”

Just a day before, teammate Stephan Hicks, who also had 20 points against SDC, had manifested his faith in the struggling Greene, saying he was sure that if the sophomore kept shooting, “the balls would eventually fall.”

Hicks’ prophecy came true for a night. Greene shrugged off his four misses and continued to pull up confidently. He drained his next four attempts. By the end of the first half, Greene led all scorers with 14 points on 6-for-13 shooting.

As far as San Diego Christian goes: the second half was a mere formality. The Hawks got punched and never answered.

CSUN trailed 10-7 at the 15:54 first-half mark before a familiar face got it started offensively. Hicks, CSUN’s leading scorer, scored eight consecutive points, jumpstarting a 14-0 run for the Matadors. The run put CSUN in absolute control for the rest of the night.

And after having a grim shooting start to the season, Greene might finally be off his slump. He just needed to go easier on himself, Braswell said.

“(Greene) kind of held on too much to those early struggles.” Braswell said. “Tonight he kind of let all that go and played his game.”