Occupy CSUN asked by administration to plan their leave 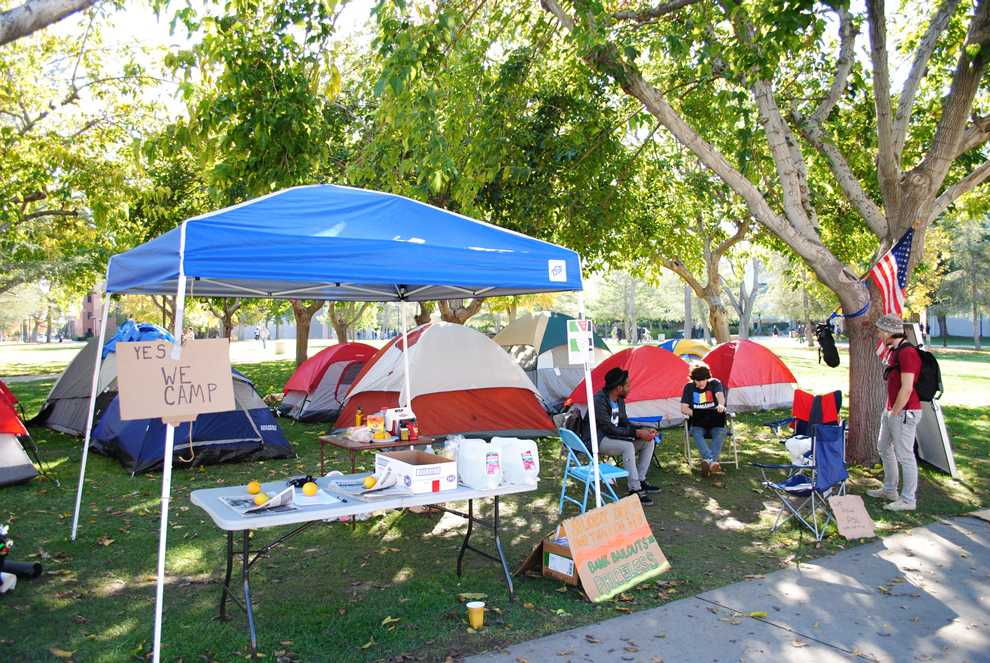 The Occupy CSUN encampmant on the Oviatt Library lawn. The movement has until monday to figure out a way to contribute to the campus at night in order for William Watkins, vice president for student affairs, to let them stay. Photo Credit: Andres Aguila / Daily Sundial

Campus administration has asked Occupy CSUN campers to set a date for the emcampment to pack up and move from the lawn in front of the Oviatt Library.

“They obviously don’t want us to be here for a myriad of reasons, including safety,” said Ankur Patel, an interdisciplinary studies graduate student at CSUN. “I would like to underscore the opportunity that the administration is helping us along, not just allowing us to go willy nilly until we fizzle out, but to actually help develop a focus point and go after some specific points of action.”

Jason Ackerman, a student organizer for Occupy CSUN, and anthropology major, agreed with Patel and sees the difference between CSUN and other universities – namely UC Davis whose police have been under scrutiny for using pepperspray against seated student activists.

“The administration is being supportive and we are very appreciative of that and let’s not lose sight of that,” he said. “They don’t have to be this cool. This campus is kind of a light in a bunch of public universities that are exhibiting some rather dark behavior.”

Vice President of Student Affairs William Watkins said the lawn in front of the Oviatt is no place for students to be camping, and that the administration is concerned about their safety.

“We don’t want a poor relationship with our students,” he said.

Occupy CSUN has been steadily growing since it set up camp two weeks ago. What started as only a few tents in front of the Oviatt Library has evolved into 10 tents, but the occupants and administration question some of the movement’s effectiveness.

Occupy CSUN’s Facebook page has a good number of followers, but has yet to draw a majority of them to the lawn, Ackerman said.

“We have 255 people on our Facebook group. Of those, we’ve seen about 20 in person,” Ackerman said. “That’s like one percent, maybe a little less, which is not good. Enough sitting on the fences. We’re here, you should be here, too. Let’s swap some ideas. Let’s get things done.”

Occupiers have been able to stay overnight on campus for the past week, but administration told the group that if they are not being proactive during the night, they have to leave campus. The occupiers are trying to figure out a way to overcome this obstacle, like asking supportive clubs to sign a field request form.

“We’re not exactly doing this with permission. We have consent, but we don’t have paperwork,” Ackerman said. “Hopefully with some of the clubs that have expressed their solidarity with us, that they actually step up and help us fill out these forms and come camp with us.”

“We need to have more people in tents by Monday, and we need to flood University Hall room 320 at 9 a.m. to show that there is this support for Occupy CSUN,” he said.

They voted during a general assembly meeting Tuesday to participate in a general strike on Nov. 28 to support their Occupy counterparts at UC Davis. This protest is occurring at different Cal States and begins at 12 p.m.

With Thanksgiving approaching, members of Occupy CSUN plan to stay put, living on campus and outside during the break.

“I can’t think of one person that doesn’t want to stay during Thanksgiving weekend,” said Andrew Laleian, CSUN biology major. “I don’t think anyone’s going to leave that early.”