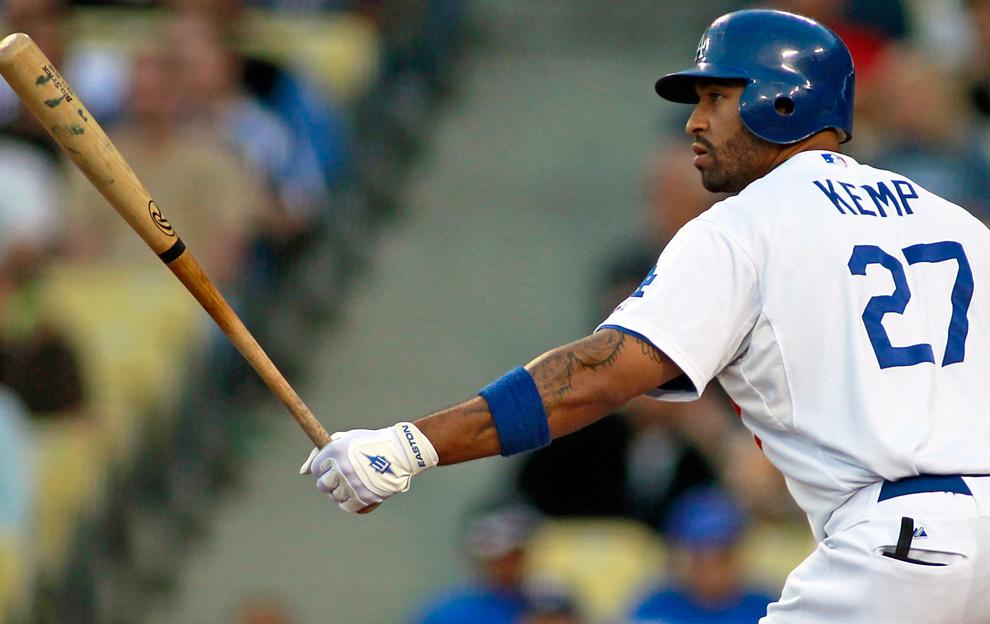 Outfielder Matt Kemp, who signed an eight-year deal last week to stay in Los Angeles, was one of the bright spots for the Dodgers during a rough season. Kemp led the National League in home runs and RBI this past season. Photo Credit: Courtesy of MCT

Maybe the shadows were a sign. The ones that covered the Dodger Stadium field on a late Thursday afternoon on Opening Day, the ones that make it so hard for hitters to see the ball during start times at Chavez Ravine.

Maybe the fans that attended the game and saw what was laid out before them should have known that this wasn’t going to end well.

The Dodgers defeated the Giants that day in a low-scoring affair – a game in which brutality happened in the parking lot where Giants’ fan Bryan Stow was put in a coma after being beaten senseless.

Dodgers owner Frank McCourt took a beating, too – from the media, from fans and from Commissioner Bud Selig. It wasn’t just for the way he mishandled that incident, but for the basic mishandling of the entire Dodger franchise the past several years.

Six months later, the Dodgers played their last home game on a Wednesday night in front of a sparse crowd – a night like so many in 2011. Most fans probably thought the same thing afterward: “If that was our summer of discontent, imagine what our winter will be like.”

Suddenly, in the dead of fall, the shadows are disappearing. McCourt has finally decided to sell the team, and many, including former Dodger players and even former owner Peter O’Malley, want a piece of the new Dodger era.

While most probably want to forget this past season, in the worst way, 2011 was a fascinating study of perseverance on two fronts, which is why it should be thought of as memorable.

Unfortunately, the first case is an ultimately depressing one. Frank McCourt came to Los Angeles with a wife and a (highly-leveraged) vision of what he wanted the Dodgers to be. Eight years later, he will step down financially and emotionally drained.

In the face of every opportunity to make the best choice for him and the Dodgers this year, McCourt was defiant. He could have let it all go sooner than he did, and it would have been the right, easy choice.

He should have given up when he saw the shadows creeping closer and closer. Instead, he hung on as long as he possibly could, making him some sort of “bizarro” William Wallace, refusing to say mercy in his final moments.

Then there were the actual Dodgers. You know, the team with the inexperienced manager, a rash of injuries and a first baseman whose picture should have been on a milk carton during the first half of the season.

The Dodgers could have – no, should have – fallen off the map. The way things were going, they should have finished with more than 100 losses.

Despite the stellar pitching of newly minted Cy Young Award winner Clayton Kershaw and the renewed play of Matt Kemp – who struck an eight-year, $160 million deal to remain a  Dodger this week – they looked lost: stuck in the shadows of bankruptcy, fan violence and a stadium that wasn’t even half-full most nights.

Giving up would have been the wrong choice, but the easy one. Instead, they rallied behind Don Mattingly, brought James Loney back from the dead and turned the dog days of the season into productive ones, finishing with a winning record.

To say there’s a lesson in all of this would be hard. There are no excuses for some of the mistakes McCourt made.

He did not deserve to be an MLB owner, but does he deserve what his mess of a life is right now? Then again, what do any of us truly deserve, anyway?

Sometimes, though, perseverance can pay off. The Dodgers were actually fun to watch the last two months of the season, and now the possibilities for next year are endless. And isn’t that just like life?

Maybe enduring in times of darkness and uncertainty, there is a light to be seen after all, for everyone.