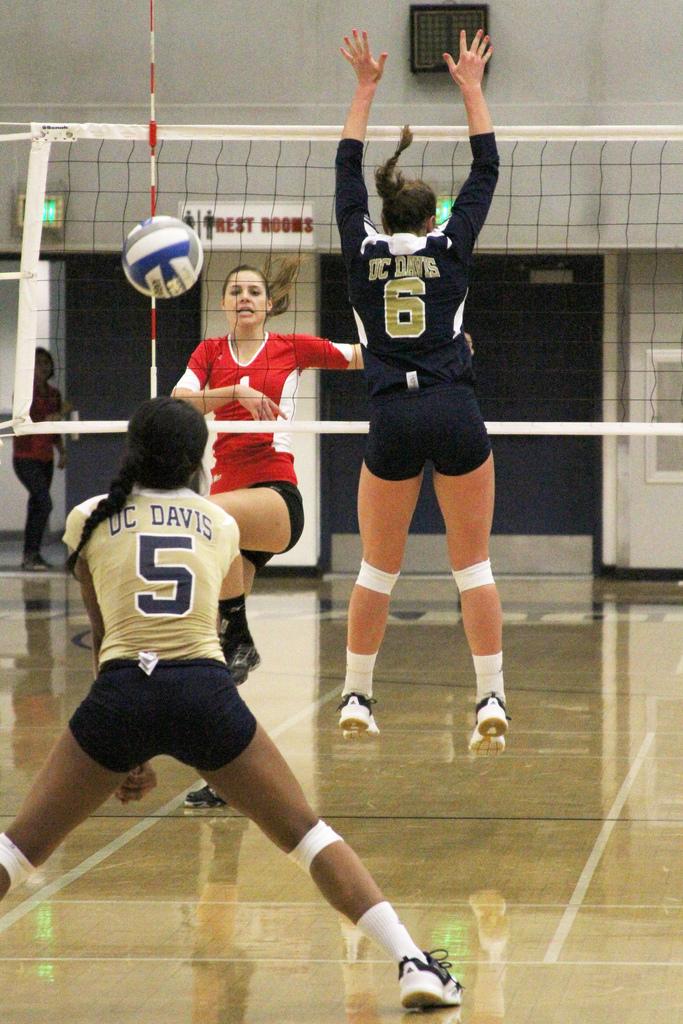 The Matadors (16-13) wrapped up their best season in seven years with a non-conference sweep over visiting Air Force (3-27) Friday afternoon at the Matadome.

CSUN, for the most part, made quick work of the Falcons in the first two sets before having to rally back in the third to get its sixth home sweep of the season.

The Matadors were up 9-5 in the final frame before Air Force turned the tables on them and outscored them 18-11 to take a 23-20 lead.

CSUN scored four of the next five points to send the set into extra points. The Matadors scored three of the next four points and took the 27-25 win.

Outside hitter Mahina Haina and opposite hitter Natalie Allen had nine kills apiece to lead the balanced Matador attack, which hit .297 for the game. Middle blocker Casey Hinger had eight kills and outside hitter Britney Graff added seven.

The Matadors found themselves in a tight match in the first set. A kill by Hein tied the score at 18-all as Air Force tried to set the tone in a game it hoped would bring an end to a 20-game losing streak.

CSUN consequently went on a 7-1 run and took the first set. Three of the Matador points in the run came off mistakes by Air Force.

The second set was all CSUN as it got off to a 13-5 lead. Air Force couldn’t get any closer than four points the rest of the way and the Matadors cruised into intermission with a 25-16 win.

The third frame was fittingly – since it was the last one of the year – the match’s most exciting one. Air Force hit CSUN and looked like it would win a set for only the second time during its 20-game drought, but the Matadors came up clutch when needed.

Senior Sam Orlandini and sophomore Sydney Gedryn split setting duties for the Matadors and ended up with 16 and 17 assists respectively. Libero Cindy Ortiz led the team in digs with 10.
CSUN out-killed Air Force 43-29.

The game was the last of the season for the Matadors, who racked up their most wins since the 2006 season.

Haina led the Matadors in kills for the season. The second-year player averaged 3.31 kills per set. Allen and Hinger provided support, averaging 2.57 and 2.52 kills per set respectively.

Gedryn was the leader in assists in 2011. The sophomore averaged 10.40 assists per set for CSUN. Orlandini, the starter for all of 2010, saw action sparingly and averaged 8.50 assists per frame.

The Matadors, who won eight of their last 11 games, hit a .198 percent average for the season while allowing opponents to hit .178.

CSUN was also averaged the most aces per set (1.31) in the conference.