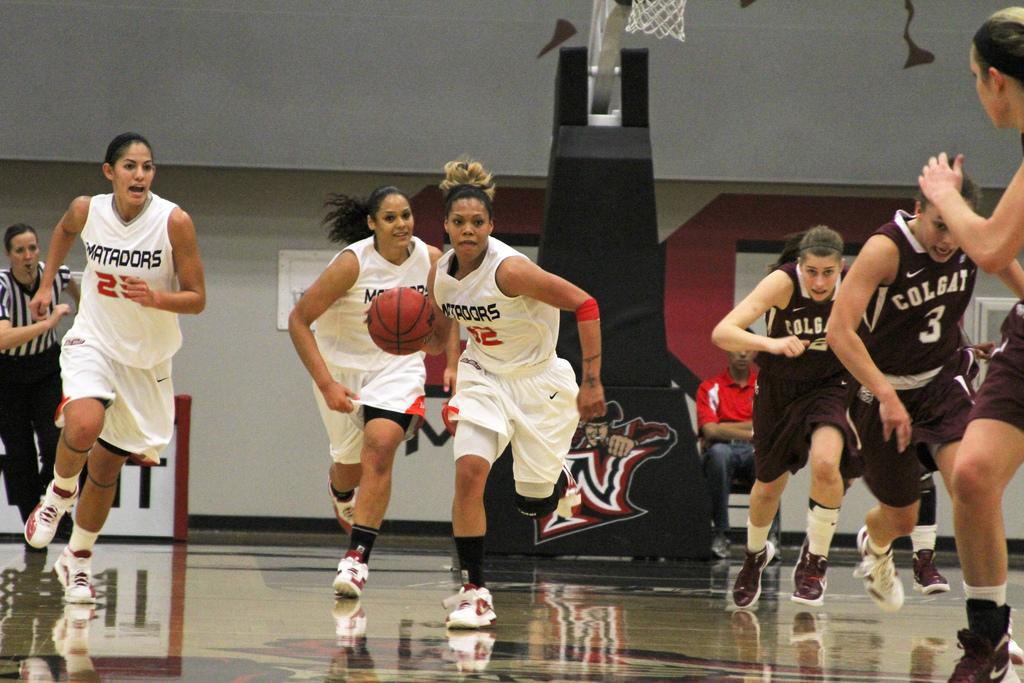 After getting off to its best start since 1998 at 2-0, CSUN dropped two in a row, but bounced back in its home opener Friday night with a 71-60 win against Colgate (0-6) at the Matadome in the Woodland Hills Thanksgiving Classic.

Even though the Matadors (3-2) shot 31 percent  from the field for the game, they were able to pull off the win to advance to the championship round of the tournament Saturday night against West Virginia due to their rebounding and defense.

CSUN’s offense was firing on all cylinders during the first half as it poured in 44 points on 40 percent shooting from the field – 12 of 15 from the charity stripe and two of four from deep. However, during the second half, its offense stalled and was forced to rely on defense to pull out the win.

“We did a good job of staying aggressive even though we weren’t necessarily scoring from the field,” said CSUN’s second-year head coach Jason Flowers. “We crashed the offensive boards, shot a lot of free throws and played great defense.

“When it goes wrong, it lands on me. We tweaked some things in-between game offensively and it made us more hesitant.”

Spearheaded by freshman guard Ashlee Guay’s tough ball pressure, the Matadors’ defensive homestand held the Raiders to 33 percent shooting while forcing them to commit 17 turnovers. They also hauled in 19 more rebounds, seven of them being on the offensive glass.

“(Guay) is like a one-man press,” Flowers said. “It’s impressive when she gets into stance and terrorizes the other team’s ball handlers. She got off to a slow start by her standards, but there was a little dialogue that we had that reminded her of what her job needed to be.”

Since the Matadors struggled to hit from the field, they leaned heavily on free throws to score. For the game, they shot 30-of-37 from the line as they aggressively attacked the basket to draw fouls.

“Attacking the paint and boxing out for rebounds were what we were focused on in practice,” CSUN center Jasmine Erving said. “We definitely showed it tonight.”

The Raiders briefly kept afloat due to their leading scorer, Jahzmine Lynch, who put up 22 points overall, 11 of them coming in the first 10 minutes of the second half.

“We guarded (Lynch) differently in the second half, but that wasn’t the plan,” Flowers said. “The challenge with a young team is understanding that you have to do your assignment every single possession, and sometimes we forget that.”