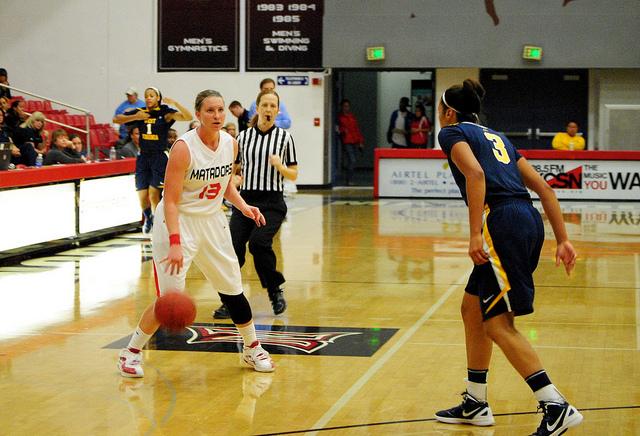 The Mountaineers (3-2) cut the Matadors’ lead to one point after guard Taylor Palmer made a 3-pointer with 1:24 left in regulation, but it was the Northridge’s zone defense that secured the close victory at the Matadome.

West Virgina was limited to 17-of-61 shooting (28 percent) by the end of the night. The Mountaineers made four shots from behind the arc, all of them from Palmer.

“We knew that it was going to be a defensive battle,” CSUN head coach Jason Flowers said. “The question was, ‘Is our defensive intensity going to match theirs?’ and ‘Could we keep them off the offensive boards?’

“You have nights like this. There are nights where, offensively, you don’t look good, or make mistakes, but if you play defense and rebound, you can compete against almost anybody.”

Despite shooting only 28.1 percent from the field itself, CSUN’s ability to get to the line and make free throws was the key that gave the Matadors the edge over WVU.

Matador guard Kaitlyn Petersen scored a team-high 17 points and went a perfect 10 for 10 from the free throw line. For most of the first half, Petersen was the only CSUN player with a field goal to her name.

“I was just trying to go out and be aggressive,” Petersen said. “Coach (Flowers) always tells us to be aggressive, so that’s what I was just doing tonight. (The Mountaineers) were fouling, so I got to the free throw line a lot. Just easy points.”

“This was a really big game for us,” Erving said. “All four years that I’ve been here … this, without a doubt, was the biggest win and a much-needed win. I didn’t have the highest scoring game, but my team picked it up.

“We had freshmen that stepped their game up and worked hard on offense and the result showed at the end.”

A first-year Matador making an impact was freshman forward Jessica Duarte, who played 14 minutes and racked up seven points, including a 3-pointer that put the Matadors up 33-32 with 12:51 left to play. Duarte’s subtle performance pleased Flowers.

“She’s good offensively. She can score the ball in a number of different ways,” Flowers said of Duarte. “She came in and sparked us. Obviously we were struggling offensively and she came in and got us some buckets.”

The first half started slow for both teams. Both sides struggled to find the bottom of the net. The first field goal came about six minutes into the game, a layup from Palmer.

Petersen gave CSUN its first field goal of the game with a 3-pointer with 12:14 remaining before halftime.

The Matadors went on a 6-0 run to put them up 23-17 with about a minute of play left in the half. But Mountaineer center Ayana Dunning put the run to the end and WVU went on a small run to tie the game 23-23 at halftime.

The Mountaineers pressured CSUN defensively using full-court presses and then switching to halfcourt traps when they felt that the Matadors were running away with the game.