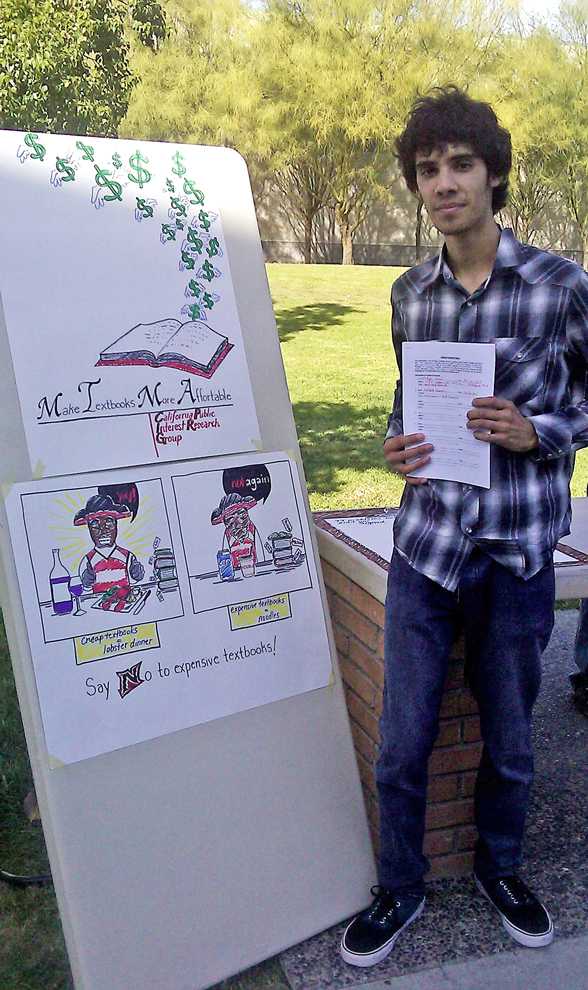 Marcos Castro, CTVA major, stands on Matador Walk holding his petition to bring down college textbook prices. He, along with friends, plans to return throughout November and December to gain signatures for a cause he says "students can get behind." Photo Credit: Braulio Campos / Daily Sundial

Tired of the rising cost of education?

“They’re the ones naming the prices, and the schools can’t do anything about it,” Castro said, as he set up his table along Matador Walk. “The bookstore has to sell at these prices in order to turn a profit, so changing the price at the textbook companies is where we need to start.”

Castro is an intern at CALPIRG, an organization that advocates issues on behalf of Californians. He chose this petition project for his internship’s campaign.

The ultimate goal is a push for ‘open’ textbooks — e-book versions of textbooks provided free to students, Castro said.

“They are freeware, and considering the popularity of e-readers like Kindle and iPad, they have the ability save students a lot of money,” Castro said.

Free texts could also be printed and viewed from a computer, Castro added.

CALPIRG will send the petition to major textbook companies once the signatures are turned in. Castro set a goal for himself to get 200 signatures.

Castro plans to come back to Matador Walk again at the end of November and gather more support in December.