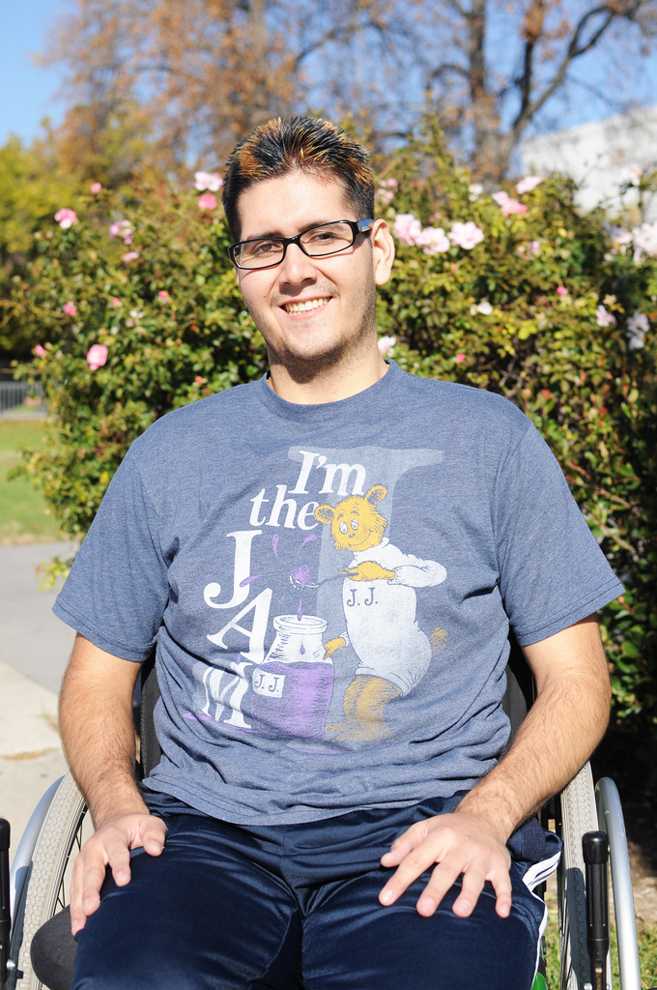 Gerardo Garay, kinesiology major, continues his college career despite a traumatic car accident that left him with brain damage. He said his life is not the same. Photo Credit: Ken Scarboro / Editor in Chief

It’s been nearly five years since Gerardo Garay’s world was turned upside down after a major car accident that permanently affected his view of the world.

On Dec. 9, 2006, Garay, a 24-year-old kinesiology major at CSUN, was coming back from Las Vegas with his friends when his best friend, driving 90 miles per hour, fell asleep behind the wheel.

Garay was not wearing a seatbelt. He was ejected from the car more than 70 feet and hit his head on the pavement, sending him into a coma for the next three months.

Today, Garay speaks about his diagnosis with brain damage and how it has changed his life.

“My social activities have not been the same,” Garay said. “After the accident, a lot of my friends left. Women see me differently now. Women don’t even bother with me (anymore).

Before the accident, Garay was sociable and popular; he didn’t have a problem getting dates with women.

After the accident, people were discriminatory against him, Garay said. Classmates became irritated because they couldn’t understand his speech.

Women dismissed him because of his mental and physical limitations, Garay added.

“A couple years after the accident, I went to a dance. There was this girl I (liked) and I went up to her and said, ‘I know I’m in a wheelchair but I can dance. If you hold me up, then we can dance together. Would you like to (dance) with me?’” Garay said. “She said no because she had a boyfriend. Then later I saw her dancing with another guy and it wasn’t her boyfriend. The truth was she just didn’t want to dance with me.”

Coping with his physical status has been a challenge, but this doesn’t leave Garay any less proud of his accomplishments.

Doctors said he would never be able to walk again, but after years of practice and rehabilitation exercises, he is out of the wheelchair and walking around with nothing but a single cane.

“Going from a wheelchair to a quad cane was tough. But going from the quad cane to a single cane was the hardest thing I have ever done in my life,” he said. “I had to keep pushing myself, even when it hurt.

Despite the negative impact of the accident, Garay said he looks forward to the future. He expected to finish his kinesiology degree in Spring 2013 and wants to work rehabilitating physically disabled people.

In terms of his family, Garay feels blessed for having parents who believe he has career potential. He is also thankful for his sister, a UC Berkeley graduate student who encourages him on a daily basis.

“There have been times where I have just wanted to give up and die,” Garay said.“Doctors told me I would never be able to walk again, and when I was in a coma, they told my family that I would die. But I thank God (for) my family. They make me feel like I can do anything.”

Even a near-death experience doesn’t stop Garay from cherishing his life.

“What I’ve learned through all this is that if you always (concentrate) on the (negativity) in life, you will never be happy. You have to smile. You have to be positive,” he said. “Otherwise, life (will have) already passed you by. And you can’t ever get that back.”