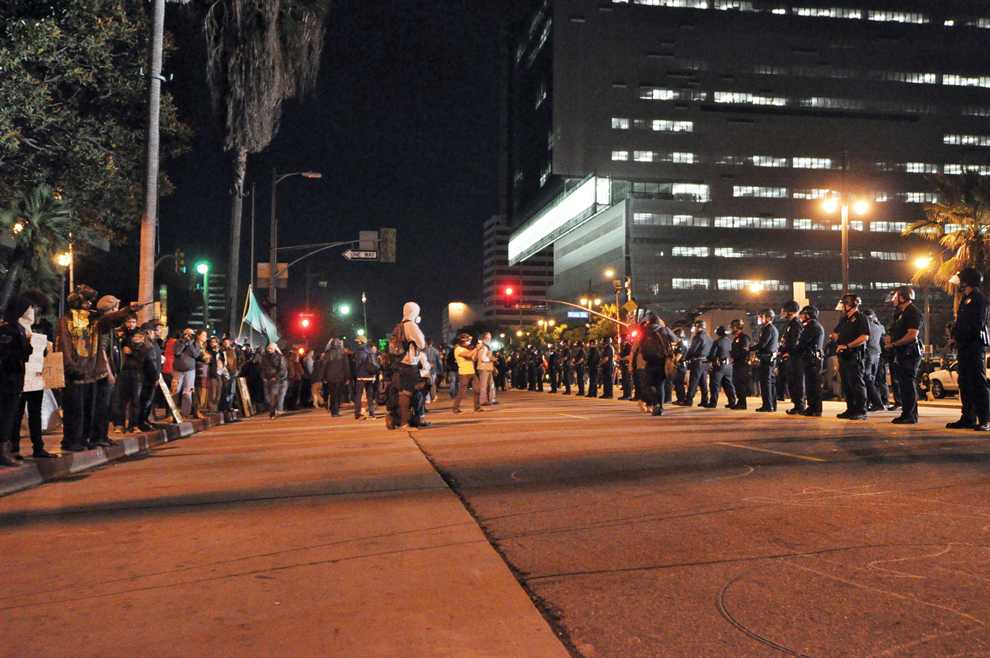 Protestors and police face-off on First Street at nearly 5:00 a.m. Monday. Polie promise they would not make arrests inside the camp, requesting protestors clear the streets. Photo Credit: Ken Scarboro / Editor in chief

Protestors and police face-off on First Street at nearly 5:00 a.m. Monday. Police promised they would not make arrests inside the camp, requesting protestors clear the streets. Photo Credit: Ken Scarboro / Editor in Chief

Despite an eviction deadline of Monday at 12:01 a.m., Occupy L.A.’s encampment on City Hall lawn is still standing.

The protesters, who have occupied the lawn for almost two months, filed a court order Monday morning requesting occupiers be allowed to continue camping.

The court order, filed after protesters were not removed from City Hall lawn, noted that the defendants are in violation of the 1st and 14th Amendments by approving of the Occupy presence for 56 days then suddenly, and randomly, requesting they leave.

The City of Los Angeles, Mayor Antonio Villaraigosa and Chief Charlie Beck were named as the defendants. Five occupiers filed the order.

More than a thousand protesters converged on the site to stop police from closing the encampment. Protesters ranged from students to veterans, religious leaders to lawyers.

Most protesters agreed Occupy L.A.’s purpose is to get corporate greed and money out of politics, although many people had additional reasons for being there, such as LGBT rights or the high unemployment rate.

Susan Hartley, an employment law attorney who works with Veterans for Peace Los Angeles, stood in the intersection of 1st Street and Main Street waving a flag with a peace sign on it until the dispersal order was given.

“The whole country’s gone nuts, greed controls everything,” she said. “Like any revolution in history, including the American Revolution, no one knew what was going to happen in the beginning, and same goes for this one.”

Hartley said the protesters’ message is specific: “Why bail out banks and not people?”

For over four hours, police officers slowly moved in on protesters, trying to force them off the streets surrounding the park.

At around 3:20 a.m., LAPD announced they would not raid the encampment but rather wanted everyone off the streets.

“Although peaceful, it’s not a sustainable piece of property,” Smith said.

When asked where protesters could find sustainable property that could be occupied safely, Smith deferred the question by repeatedly saying the current situation could not continue.

Four people were arrested for refusing to leave the street.

Protesters lining the sidewalk around City Hall faced off with police officers standing on 1st Street. Demonstrators chanted “Whose blocking traffic now?” until the streets were reopened in time for morning rush hour.

Although occupiers and police officers appeared to be relieved that the six-hour standoff was peaceful, not everyone was optimistic.

Emily Francis, an assembly speaker that has been camping at Occupy L.A. since the third day of its creation, Sarah Garcia, CSUN deaf studies major and Students for Quality Education (SQE) member, and Matthew Delgado, CSUN photojournalism major and SQE member, speculated that police would be back without warning.

The police will “move in when people and media are gone,” Francis said. “At least when we’re in the streets we force them to raid while we have media attention.”

Smith confirmed that Friday’s warning of the Monday morning eviction was their message to leave.

Protesters will be given a brief warning when the LAPD decide to uphold the eviction, Smith said. He would not define how much time occupiers would be given to evacuate.

“Even if I knew when they would move in or what their strategy was going to be used, it’s policy to not talk about strategies,” Smith said.