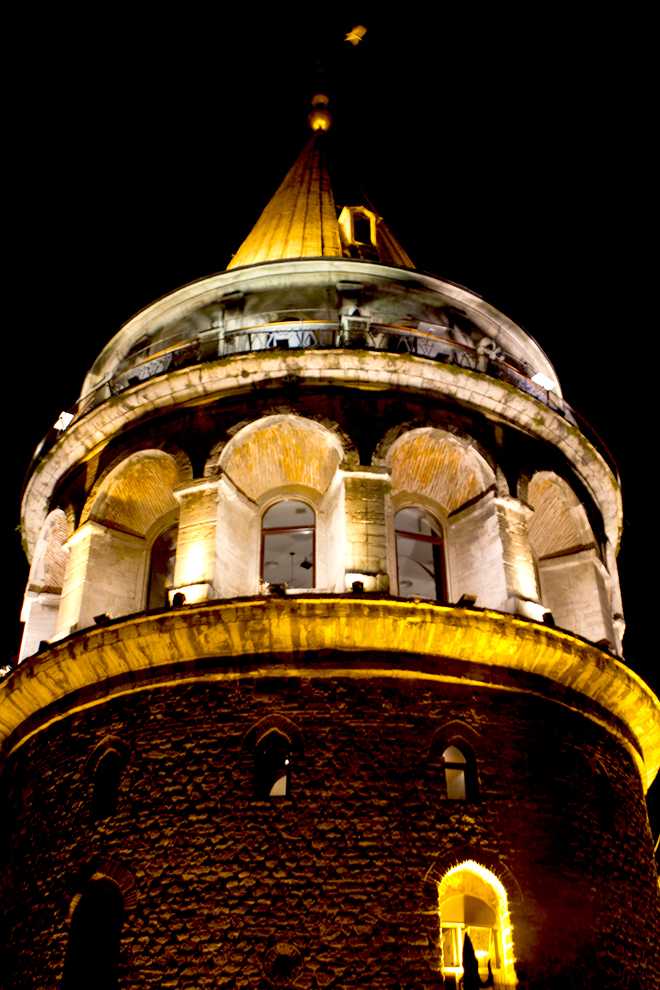 The Galata Tower, or Christea Turris in Turkish, is a medieval stone tower located in the Galata District in Istanbul. Locals gather, in the evenings, in the courtyard surrounding the tower and socialize, drink, and play tavla. Photo Credit: Kat Russell / Daily Sundial

It was nearly 10 p.m. I had gone to call on my multimedia teacher and his wife, at their apartment in Galata, seeking advice regarding the status my assignment. I was feeling completely overwhelmed and I knew my teacher could put my mind at ease.

After a bus, tram and a bit of a walk, I arrived at their apartment. My instructor’s wife made tea and put out some snacks, all of which we carried up to the rooftop terrace.

There, with the Galata Tower looming less than 200 feet away and a beautiful cityscape stretched out below us, we sat and talked about my concerns.

My instructor addressed each one of my concerns, offered direction and succeeded in putting my mind at ease. In the end, he said to me it was because I cared so much that he knew I would succeed. I felt relieved.

By then, it was close to 11 p.m. Unsure of what time the trams and buses stopped running, I figured it was time for me to head home. I thanked my professor and his wife and began the walk back to the tram stop.

As I was walking, I realized I had not chosen the same path I had taken earlier. I wasn’t concerned at first, as I knew all the roads in this area led down the hill to the main road along which the tram ran.

The street I was on began to narrow until I found myself walking down what looked like an alleyway with absolutely no light. I began to feel nervous. I could not see on either side of me and had no idea what sort of area I was walking through. But, I could see the main road about 4 blocks in front of me so I proceeded as quickly as I could.

When I reached the main road I was completely disoriented – I had no idea where I was, I didn’t recognize anything and I wasn’t sure which way I should go. There were no trams, no buses, and no cabs in sight – in fact the streets were practically abandoned.

I decided on a direction and began to walk. As I walked, my mind wandered.  Upon our arrival in Istanbul, my classmates and I were warned several times not to walk around alone late at night and here I was doing exactly that. To make matters worse, I was carrying my Canon 7D, which was not easily hidden. I decided I would flag the first cab I saw, but until then I had to keep walking.

I had been walking for roughly 20 minutes when I turned a corner and saw a family getting into a car.  There was an old man, perhaps a grandfather or family friend, and he was saying goodbye to a man, his wife and a teenage boy as they were getting into their car. I quickened my pace, walked up to the old man, and, in garbled Turkish, asked how to get to the Karakoy tram stop.

He spoke English. He asked me where I was trying to go and I told him. He told me I was in luck, that the family in the car was headed that way, ushered me into the car and instructed the driver to take me to Besiktas.

Normally, I would hesitate to get into a car with strangers, but seeing as it was nearly midnight and I was lost, getting into the car with this family seemed like my better option.

As I got into the car, the last call to prayer rang out across the city. The old man paused, listened to the call, and looked at me. He asked, “do you hear the call?” I told him I did. He replied, “well tonight they call for you.” He closed the car door, smiled and away we drove.

I made it home safely that night, feeling blessed, grateful and deeply moved by what the old man had said. His kind words and the family’s generosity still warm my heart when I think of them. They were such simple acts of kindness, but they’re impact on me was profound.