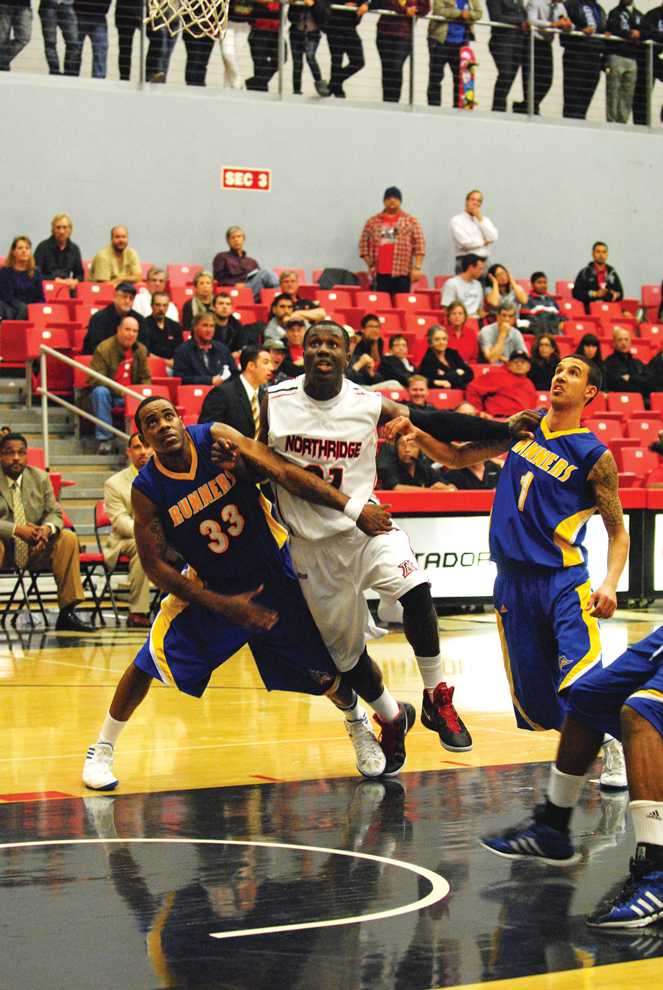 While the Matadors were chipping away at Cal State Bakersfield’s 17-point lead in the second half, the jam-packed crowd at the Matadome was buzzing about CSUN’s new weapon.

Freshman forward Stephen Maxwell made a huge splash in his Matador debut Wednesday night, recording a double-double with a game-high 20 points and 11 rebounds, and drew oohs and aahs from the stands, and even from CSUN head coach Bobby Braswell.

“I didn’t expect him to play that well, he played extremely well,” said Braswell about Maxwell, who missed the first five games of the year due to a health issue.

However, Maxwell’s surprising performance didn’t lead to a much-needed victory for the Matadors (1-5) as they fell short against Bakersfield 74-67 in a down-to-the-wire game.

With the game tied at 62 with 3:13 left in regulation, CSUN forward John Hayward-Mayhew – who also provided his team with an unexpected boost – was called for a flagrant foul that kick-started an 8-0 run for the Roadrunners (4-1) and cost Northridge the win.

“It was definetely a momentum changer,” Braswell said.

Hayward-Mayhew, who scored 15 points, didn’t agree with the call.

“I believe I was just posting up, ref saw different,” he said.

The loss dropped the Matadors to 1-5 on the season, but with Maxwell’s solid play, there’s reason for optimism. One large reason CSUN’s struggled thus far was due to a lack of presence in the paint.

“(Maxwell) was clearly the most valuable, most inspirational, most everything out there tonight and we missed that toughness all year long,” Braswell said.

The 6-foot-5 Maxwell said he felt “like an old man out there” in his first collegiate game, but got his wind in the second half. Maxwell seemed to have a lot of energy in his 22 minutes of play, grabbing eight offensive rebounds.

And when he didn’t come up with the board, he at least had a hand on the ball.

“I know I’m a strong rebounder and I just want to bring that to the team,” Maxwell said. “I’m pretty athletic, I  play hard and do whatever it takes to get the rebound.”

CSUN didn’t get off to a solid start in the second half and fell down by 17 points, but behind Maxwell, the Matadors went on a 23-5 run and took the lead at 52-51.

CSUN struggled form the field in the first period, shooting a low 30 percent (9-of-30) compared to Bakersfield’s hot 63 percent (17-of-27). For the game, the Roadrunners finished at 62.5 percent from the floor.

After a controversial early basket by Hicks was taken off the scoreboard, Bakersfield went on a 17-6 run to build a 24-10 lead, its biggest advantage of the first half.

Behind the play of Hayward-Mayhew, who scored 13 points in the first period, CSUN pulled within three points on a 15-4 run. The forward had nine points during the scoring burst, including a 3-pointer that made the score 28-25 with 5:30 left in the half.

Braswell decided to sit sophomore guard Josh Greene for the entire first half as a “message.”

“We had a little message to Josh about what he needed to do defensively,” Braswell said. “He wasn’t very good in the last game we played (against Drake) and he hadn’t been  playing well defensively.

“But he was reason we had the run we had (in the second half). His defense was solid.”

Greene started the second half and finished with 10 points on 3-of-11 shooting.

The Roadrunners were led by Tyrone White and Issiah Grayson. Both had 17 points.

CSUN’s next game will be Saturday at Santa Clara.