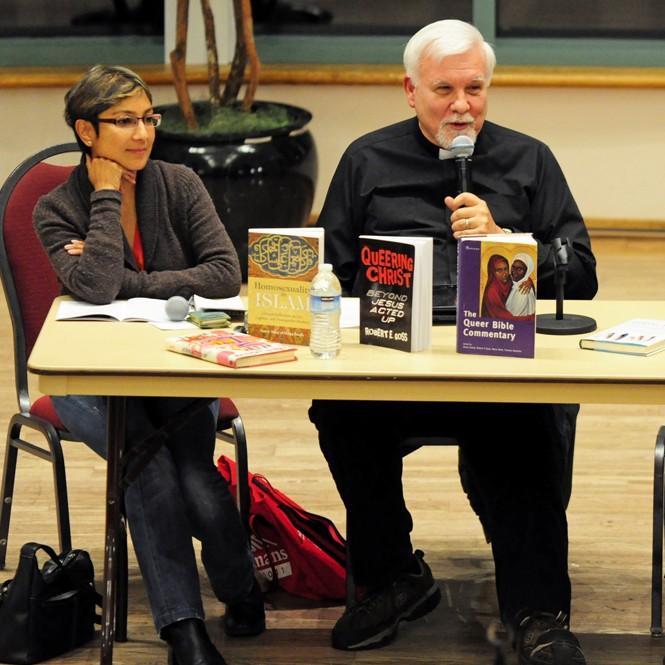 Reverend Robert Goss (middle) was one of three religious experts on the panel representing one of the major faiths; Christianity. Goss believes that his religion does not condemn homosexuality. The Queer Education Fair was held Tuesday night at the USU Grand Salon. Photo Credit: Karlee Johnson / Daily Sundial

Neither Christianity, Judaism or Islam condemns homosexuality, according to a panel of religious experts representing those major faiths at the Queer Education Fair held Tuesday night in the USU Grand Salon.

Reverend Robert Goss, an openly gay pastor, member of the Metropolitan Community Churches and CSUN professor, represented Christianity and told an audience of about 50 many of the anti-gay texts in the Old Testament wouldn’t apply in contemporary times.

“Biblical texts have been used to bash on LGBTs, but many of them have been taken out of context,” Goss said. “The scriptures aren’t about homosexuality, but about gender issues and misconceptions.”

Scriptures in Leviticus and Romans can be explained as attempts to deter incest and female seizure of male dominance, both of which were viewed as sexually deviant in ancient times, Goss said.

“In the ancient world, when an army conquered another, they phallically penetrated the loser and ‘feminized’ them,” Goss said. “The underlying meaning of Leviticus is about a male betraying his dominant status by becoming penetrated.”

Dr. Jane Drucker, an openly gay member of the Congregation of Kol Ami, represented Judaism and agreed with Goss’ assessment. She believes the meaning of scriptures have been tainted and mistranslated to appear anti-homosexual.

“The minute the original Hebrew or Latin was taken out of context and translated, it became someone’s interpretation,” Drucker said. “There was no such thing as homosexuality when any holy book was written.”

Drucker also asserts the scriptures’ creation stories of a man and woman should have no impact on whether homosexuality is biologically correct or not.

“Eve was created as a companion for Adam,” Drucker said. “No mention of procreation was made at the time. At that point, her gender was irrelevant.”

Ani Zonneveld, the founder of Muslims for Progressive Values, represented Islam and said the Qu’ran does not mention homosexuality in any of its scriptures.

“The word homosexuality doesn’t even exist in the Qu’ran, and that fact makes it a non-issue,” Zonneveld said. “Muhammad never punished homosexuals, and there’s no punishment stated in the Qu’ran for being a homosexual.”

Even though there is no mention of it in their holy book, Zonneveld attributed modern Muslim homophobia to Christian influences.

Goss, Drecker and Zonneveld unanimously agreed that faith shouldn’t stop a person from being who they are.

“If you go to a church or synagogue that says you’re evil because you’re gay, then you need to get out and find a place that accepts you,” Drecker said.