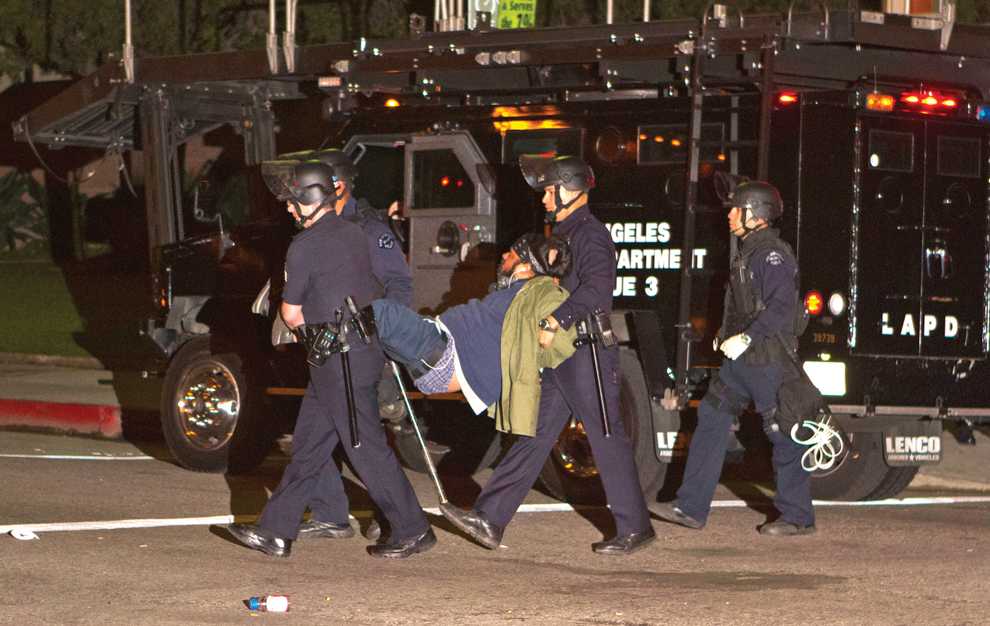 An Occupy Los Angeles Protestor was arrested and carried out of Solidarity Park. An estimated 300 protestors were arrested during the eviction of the OccupyLA encampment. Photo Credit: Kat Russell / Daily Sundial

A selected media pool was created by LAPD Monday during the encampment’s first eviction attempt, so only reporters that were chosen by LAPD could document the night.

No independent media were allowed without threat of arrest, and the American Civil Liberties Union (ACLU) plans to file a court order against the LAPD unless they lift media restrictions, according to LA Weekly.

An anonymous man on a bicycle rode by the encampment around 8 p.m. Wednesday, warning of a raid scheduled for that night. Four hours later, over 1,000 LAPD officers arrived in buses and lined the streets surrounding City Hall.

Additional officers came out of City Hall and quickly formed lines around protesters in the encampment, the longest one in the nation lasting nearly 60 days.

Just before 1:00 a.m. LAPD gave their final warning to protesters and media to leave City Hall property. Those who stayed, including protesters that had taken to the streets, were arrested.

All but two arrests were for failure to disperse – one person was arrested for interfering with police action and the other for battery of an officer, Sergeant Mitzi Fierro told Reuters.

The National Lawyers Guild released a statement demanding the “immediate release” of all Occupy LA protesters arrested last night, according to KPCC.

“The City is holding them in jail on $5,000 bail until they can be arraigned by a judge, which can take up to 48 hours.” the statement noted. “This punishes people for exercising their First Amendment rights.”

There were no occupiers in the encampment by 5 a.m. and what was left of their tents and belongings were spread across the lawns, according to the LA Times.

An anonymous occupier that had been staying at City Hall since the two-month encampment began said this is only the end of chapter one, and protesters would be back.

LAPD did not use teargas but batons were used throughout the night and beanbag guns were used at close range to remove three protesters from a tree, one of them was seriously injured, according to Neon Tommy.

Not everyone thought the use of weapons on the mostly-peaceful, unarmed protesters was excessive.

“I couldn’t be prouder of what I believe is maybe the finest moment in the history of the Los Angeles Police Department,” Villaraigosa told reporters.

He said there were no major injuries to police or protesters, according to Reuters.

The only media allowed to observe the raid, and not moved to areas too far away to see the arrests, were the LA Daily News, Los Angeles Times, Reuters, a photographer from Associated Press, FOX 11, NBC 4, ABC 7, KPCC, KNX and KFI.

To be considered for the media pool, reporters had to attend a secret meeting held Monday  by LAPD, and have a police-sanctioned pass, which are only given to reporters specifically covering police, according to LA weekly.

An email sent by Lieutenant Andy Neiman, head of LAPD media relations, told select media outlets about the meeting at 5:30 p.m. City News, a wire service that not all news outlets subscribe to, released the email at 6:00 p.m.

“At some time in the future, whenever they decide to shut down the park — once it’s declared an unlawful assembly — only the ‘pool’ people are going to be allowed in there,” said Officer Karen Rayner in the media relations office.

Mayor Villaraigosa did not view the pool as a violation of the first amendment.

“During the park closure, a First Amendment area will remain open on the Spring Street City Hall steps,” Villaraigosa said in a statement made at City Hall at 1:01 a.m. “Once the park is cleared, it will be repaired and returned to all Angelenos to exercise their First Amendment rights.”