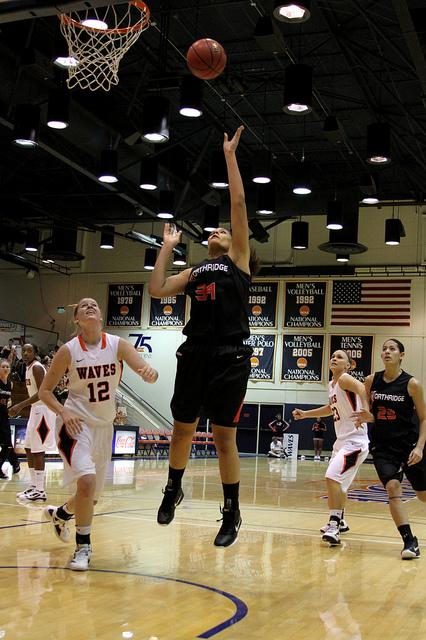 With 16 seconds left and CSUN trailing 64-61, freshman Jessica Duarte knocked down the game-tying 3-pointer, but the solid play of Pepperdine guard Jazmine Jackson and a costly turnover cost the Matadors the win as they fell 68-64 Saturday afternoon at Firestone Fieldhouse.

Jackson’s layup put the Waves ahead 66-64 and only giving CSUN six seconds to tie the game. However, freshman guard Ashlee Guay turned the ball over and ending the Matadors’ hopes of a comeback victory.

“We didn’t take care of the basketball,” CSUN head coach Jason Flowers said. “We didn’t get stops when we needed to.That kind of sums it up. It’s the reality of winning close games.”

CSUN’s 26 turnovers created 21 points for the Waves, but there were a few positives for the Matadors.

With CSUN down 60-59, Kaitlyn Petersen made a jumper to regain the lead for Northridge with 1:36 left in regulation. Seconds later, the Matadors saw their one-point lead turn into a three-point deficit on Jackson’s free throws and layup.

Flowers’ squad allowed Pepperdine to shoot 38.6 percent from the field and only 4-of-13 from behind the arc.

CSUN center Jasmine Erving, who scored 27 points and grabbed 10 rebounds, understands the errors the team made in the last minutes of the game.

“We just made minor mistakes at a crucial time,” she said. “Our team is really young this year. Obviously we have five new freshman and two transfers, but we don’t ever use that as an excuse. Coach tells us that we’re all basketball players. It doesn’t matter how old or young we are, we have to get the job done and today at crucial times we just didn’t do that.”

As a team, the Matadors shot well from the field, shooting 48.3 percent (28-of-58) with 4-of-16 from downtown. But free throws made the biggest difference, only attempting five while Pepperdine found itself at the charity stripe 23 times.

“We could have maybe been a little more aggressive on the offensive side,” Erving said, making 1-of-2 from the line. “Our field goal percentage was the best that it’s been all year, so we definitely were shooting well, but that definitely was key. We need to get to the free-throw line more.”

For the first 10 minutes of the game, it looked as if it would be a repeat from Thursday’s game against CSU Bakersfield. The Waves came out hot, with their first three baskets coming from behind the arc. But the Matadors prevented Pepperdine from making any more from long distance for the rest of the half.

The Waves went on a 9-2 run that put them up 15-12 with 11:43 left in the first half. But when it seemed like Pepperdine was running away with the game, Northridge made a push of its own to remain within striking distance.

CSUN managed to hang on in the first half, only trailing by six points. Erving did most of the work for her team, scoring 17 points in the first half and grabbing five rebounds, making her fifth in rebounding in team history. Petersen made the only 3-pointer for the team in the first half.

The Matadors had trouble executing their offense in the first half, shooting 36.7 percent (11-of-30) from the field. Northridge found Erving numerous times in the paint, but the senior had difficulty making baskets she would make routinely.