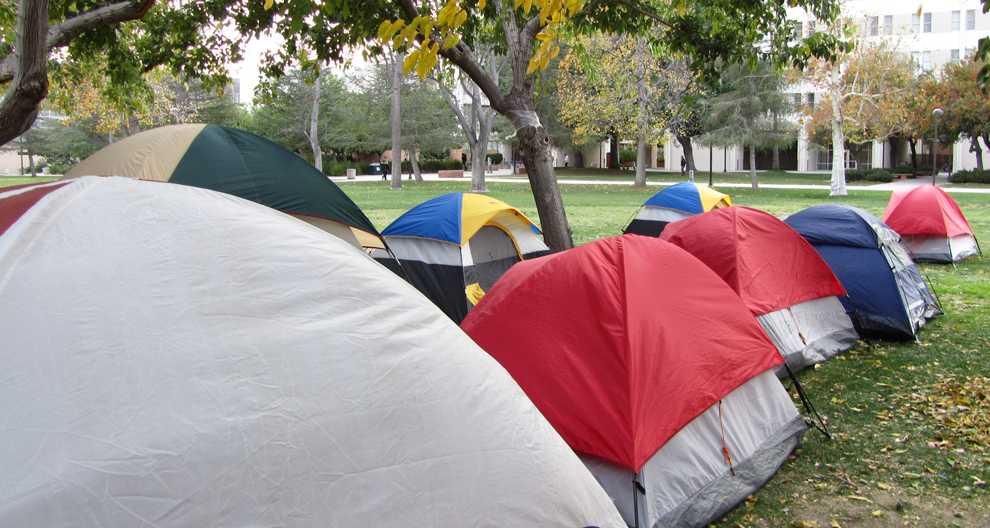 A Chicana/o studies instructor asked his classes to join Occupy CSUN Thursday night and camp with protesters, making the total number of participants over 80.

Gerard Meraz, Chicana/o studies instructor, said students need to stand up to the hardships and crisis their families continue to face on daily basis.
“We have our own occupy,” Meraz said. “It is part of our history and time and (we) need to be aware of what’s going on even if they haven’t been on the front-line in downtown.”
Meraz said the main point of his classes joining the occupy movement is to learn how to hold public dialogue and establish a clear message.
“Whether it’s the fee hikes, gay rights, women rights, you need to learn how to refocus your argument,” he said.
Some students chose to join forces with the movement to provide support to friends and other participants.
“We just thought of our friends who can’t be here because of financial disability,” said CSUN student George Martinez.
Martinez said he believes there tends to be “power in numbers” and if more people raise awareness to their friends and colleagues, change will eventually come.
Some of the Occupy CSUN movement organizers were surprised to see more participants.
Ashley Luke, an organizer of Occupy CSUN, said she hopes for the best with the unexpected growth.
“It makes us (organizers) motivated to go after the issue to bring around some type of change,” she said.
With the recent 9 percent tuition increase, which will take affect in Spring 2012, some students are becoming more involved and inspired to bring an end to the continual fee increases.
“This is a state university, we shouldn’t have to pay for our education,” said Adriana Futalca who has been camping at Occupy CSUN for over two weeks.
“We are paying more for less,” she said.
Martinez said he was informed of the different committees which are supporting the movement and is thinking of joining one.
“It is crucial to take action if we don’t like something and want it to change,” Martinez said.
Police and school officials have not granted the movement permission to camp out and occupy the space because the administrators’ are concerned about the safety of people living in tents, Luke said. However, movement leaders hold regular meetings with school administrators.
“I guess they feel for us and don’t mind our encampment movement,” Luke said.
Marvin Stern, CSUN alumni and activist who joined Occupy L.A. the first day it formed, said he wants to witness the movement of Occupy CSUN grow.
“If people are not able to assemble peacefully, then we failed as a nation. We are trying to speak for the 99 percent who are not able to afford education, who have lost their jobs, and who lost their homes, their future is oblique,” he said.
Four classes participated in the one-night stay; CHS 100 Chicano Culture,  two classes of CHS 111 Chicano + The Art and CHS 155 University Writing.
Delete Image
Align Left
Align Center
Align Right
Align Left
Align Center
Delete Heading