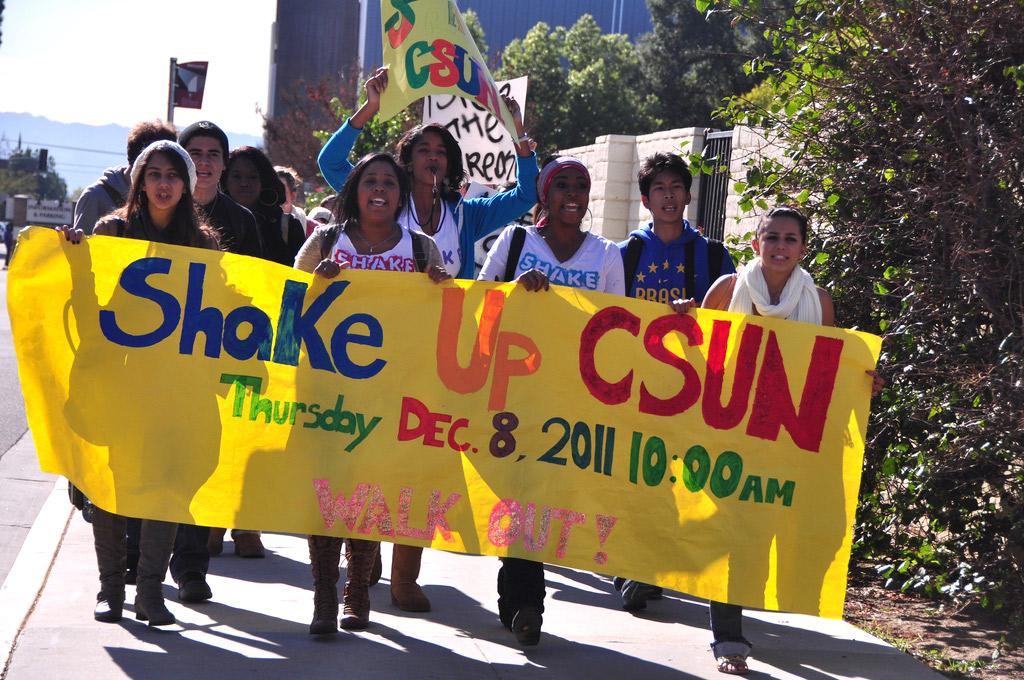 CSUN Shout Out Scholars lead a walk out march through campus, raising awareness of school issues. Protesters yelled, "CSUN shake up, CSUN walk out" as they marched, trying to get more students to participate in their demonstration. Photo Credit: Julian Reyes / Daily Sundial

CSUN students marched through the halls and walkways of campus, blowing whistles and shouting, “CSUN, walk out, CSUN shake up,” in hopes of trying to raise campus awareness of various school issues.

The march was organized by CSUN Shout Out Scholars, led by biology student Jenee Galindo, who said they originally didn’t expect anyone to walk with them but eventually got people to notice. About 30 people participated in the walk out.

“That’s what we really wanted,” she said. “(We are walking) to stand up for our rights of education. We don’t want to just sit by and watch.”

She said they are fighting for the rights of students, against increased tuition and the newly implemented 15 unit cap, as well as for the lack of pay raises for their teachers.

Galindo, who said she doesn’t have any classes next semester and will be crashing all of her desired courses, said “students need to be educated to know what’s going on.”

As the students continued to march they yelled, “What do we want? Quality education! When do we want it? Now!”

Communications major Reginald Patterson said he chose to walk out because of the tuition increases. He thinks more people need to become aware of what’s going on with tuition.

“Who are we giving our money to?” Patterson said. “Why can’t we vote for our own president?”

“Keep going and keep marching,” he said to a crowd that formed in front of Sierra Tower.

Graduate student Ankur Patel, who took part in the Occupy CSUN movement for three weeks, spoke to the crowd, saying he is not a big fan of marching.

“Always yelling in the streets is not the most effective use of our energy,” he said. “It’s about figuring out how you can input.”

Patel told marchers that it’s a personal responsibility to get educated about what is going on with the government, budget, and the CSU board of trustees.