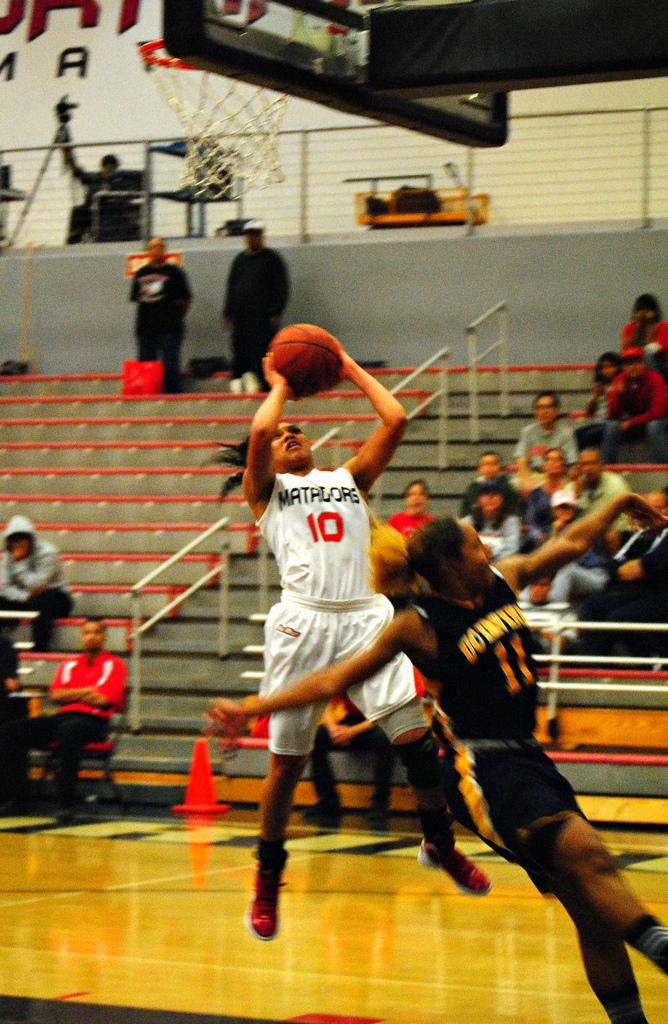 It was a defensive display from CSUN guard Janae Sharpe and center Camille Mahlknecht that led the Matadors (6-7, 1-0 Big West) to a 55-49 victory against UC Irvine (4-9, 0-1) Thursday night at the Matadome.

In its Big West Conference season opener, CSUN pushed its defense effort to come away with 16 steals, seven blocks and forced the Anteaters to turn the ball over 33 times.

“I think we did a pretty good job defensively,” head coach Jason Flowers said. “Obviously (Sharpe), seven steals or whatever she ended with, she got in the passing lane and used her quickness and athleticism. I think (Guay) was better at guarding the basketball. When those two are guarding the basketball, playing passing lanes like they were, it makes our defense a lot better.”

Matador guard Sharpe had a career-high game, with 19 points and seven steals. It was her offensive and defensive aggressiveness that helped her team get the win.

“It feels good,” Sharpe said. “The conference started so all the hard work we did in practice; running, boxing out, playing defense, rebounding; that’s what gets the (win).”

Flowers preached the importance of defense to his team and it showed in tonight’s performance. In the first half alone, the Matadors had eight steals and five blocks. On top of that, Northridge’s defense forced 17 UCI turnovers in the same period.

When it wasn’t steals from Sharpe, it was blocks from center Camille Mahlknecht, who ended the game with five.

“(Mahlknecht) came in and was big, being an eraser in the middle and blocking shots” Flowers said. “It was a good defensive effort and obviously we’re going to try and continue to try and get better.”

Though CSUN’s defense was firing on all cylinders, its offense was not enough to pull away from the Anteaters. The Matadors shot 32.8 percent (22-of-67), but even with UCI’s 16-of-46 shooting (34.8 percent), Northridge barely edged out its opponents.

It was a game of runs for both sides in the first half. CSUN would go on a run, and went it seemed like Flowers’ team was about to pull away, UCI would go on a run of their own. But unlike the first half, both sides were trading baskets for the duration of the second half. Trip after trip, the Matadors and Anteaters were either swapping leads or tying. There were seven ties and 10 lead changes at the end of the game.

The Matadors went on an early 7-0 run at the beginning of the game, consisting of two fast break layups that both came from steals.

Later in the first half, CSUN went on another run with 8:34 left on the clock. This time it was an 11-0 run that put the team up 23-13 and was put to an end with a layup from Anteater forward Jasmine Bernard with 5:36 left to play.

Rebounding was an area that kept UCI hanging around, beating CSUN on the glass 53-31. Flowers talked to his team about this issue in the past and is looking to resolve it by the next game.

“It’s a matter of making contact with your player before you get the basketball,” he said. “It’s one of those things where you’ve got to be disciplined enough to do it every single time and the time that you don’t do it is usually the time where you get barked at.”

CSUN guard Bridgette Conejo saw her first minutes of the season coming off the bench for Flowers. Conejo, who came off a knee injury, played only two minutes in the game. The senior guard attempted two free throws, but split the pair.