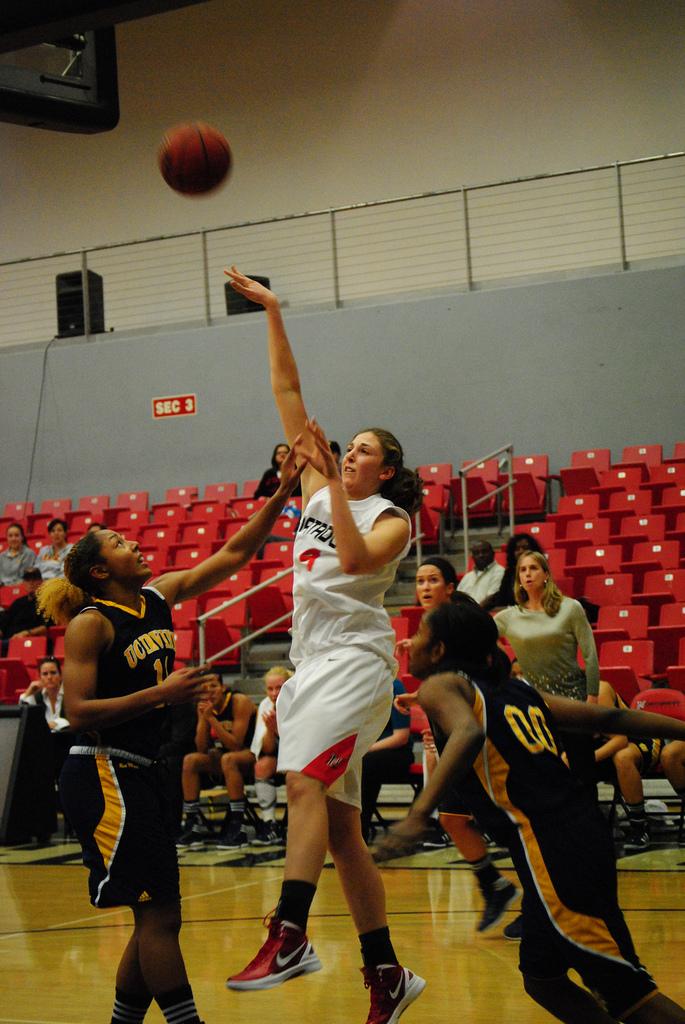 For the third game in a row, the Matadors (8-7, 3-0 Big West) used lockdown defense to amend for their offensive struggles in a 57-50 victory over Long Beach State (7-9, 2-1) Saturday night at Walter Pyramid Arena.

Despite scoring 57 points, CSUN held the 49ers to 34 percent shooting and caused them to turn the ball over 26 times, accumulating 12 steals (seven by freshman guard Ashlee Guay) and six blocks.

“We all played extremely well,” CSUN sophomore guard Haley White said. “We were all just trying to be aggressive and we anticipated where their passes were going.”

“Everyone on our team is capable of having a good offensive night,” said senior center Jasmine Erving. “That’s why we focus more on defense and stopping the other team.”

Offensively, Northridge struggled again as they went 23-of-62 from the field and 1-of-12 from downtown. But led by the strong end-game play of freshman guard Janae Sharpe, who was named Big West Conference Player of the Week, and its trio of post-players, CSUN surged passed Long Beach State in the final minutes of the game.

“Sharpe is a competitive player who knows how to get things done,” CSUN head coach Jason Flowers said. “She just always finds a way to pull through and she continues to get better. Even though she didn’t shoot well, she still found a way to help us win by knocking down crucial free throws.”

Alongside Erving’s bounce-back game in which she finished with a double-double of 14 points and 10 rebounds, freshman center Camille Mahlknecht and junior forward Violet Alama kept Northridge’s offense afloat as they came off the bench and attacked the paint at will.

“(Alama) came in and was aggressive from the get go,” Flowers said. “She came in, got offensive rebounds and put the ball in the basket. She was energetic the entire time and played well defensively, and she was the key to our victory.”

Mahlknecht finished with 11 points on 5-of-9 shooting and five rebounds while Alama had a game-high 11 rebounds and six points before leaving the game with five minutes remaining due to a cut on her head.

“(Mahlknecht) was our spark off the bench tonight,” Flowers said. “She came off the bench and shot a high percentage and blocked some shots. She sparked us when our offense was slowing down.”

This game snapped a four-game streak in which Northridge was outrebounded by its opponents. The Matadors pulled down four more overall rebounds and five more offensive rebounds, leading to 10 second chance points.

“We definitely were a lot bigger than the other team,” Erving said. “We used our height advantage and attacked the boards both defensively and offensively.”