Men’s basketball: CSUN hangs with LBSU before falling down the stretch 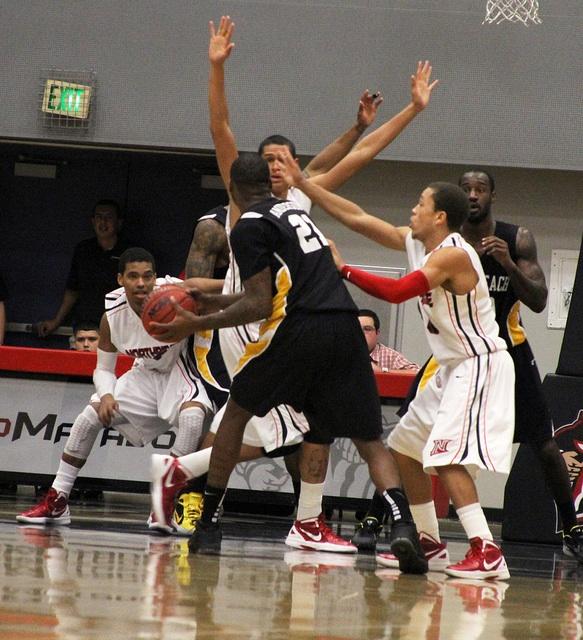 Despite losing by 13 points at home Saturday night against arguably the best team in the Big West Conference, sophomore guard Josh Greene still believes his CSUN squad is the top team in the league.

“I still think we’re the best,” a confident Greene said. “They’re (Long Beach State) predicted to win the Big West, not taking nothing away from them, but at the same time, I still have confidence in my team.”

The Matadors kept it close versus the mighty 49ers, but in the end it was too much to handle, falling 81-68 at the Matadome.

With Long Beach State being the taller, strongest, experienced team, this game could have easily been a blowout, however, the Matadors weren’t backing down.

CSUN went into the locker room only down 39-31 and kept it to a 12 to nine-point deficit for most of the second half. The Matadors played plenty of man defense and threw multiple bodies at Long Beach State’s top seniors Casper Ware, Larry Anderson, TJ Robinson and Eugene Phelps, hoping they could slow them down.

Besides running out of gas against LBSU’s big four, the Matadors missed many easy shots in the second half. CSUN was a respectable 12 of 29 in the first half, but in the second period it went 11 of 32 (34.4 percent).

CSUN has installed a similar blueprint that Long Beach State has by recruiting freshmen instead of junior college players in hopes that’ll bring them multiple Big West titles. However, it’s a long project that has its ups and downs.

“I remember when those guys (LBSU’s seniors) were freshmen and we crushed them,” said CSUN assistant coach Danny Sprinkle. “I bet they still remember that every time they play us.”

Anderson had a game-high 20 points and Robinson chipped in 17 for the 49ers.

Reining Big West Player of the Year Ware only had 12 points but made his presence felt in the first half by draining three 3-pointers.

Greene had 15 points and redshirt freshman guard Stephan Hicks, who received advice from Anderson after the game, scored 12 points.

“He (Anderson) liked my effort, he told me I can be a great player if I just keep working hard,” Hicks said. “If we keep working, we’ll be a good team, it all starts in practice.”