Men’s basketball: CSUN’s new defense lifts them to a win over UC Davis 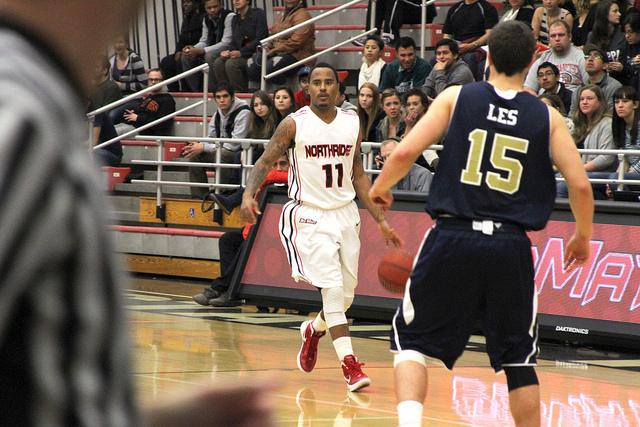 How does a team shut down an opponent for five minutes and go on a 16-0 run to erase an 11-point deficit? CSUN head coach Bobby Braswell had the perfect strategy.

With a new defensive system, CSUN pulled out a much-needed Big West Conference victory over UC Davis, 84-80, Saturday night at the Matadome.

After a blow-out loss to Pacific at home Thursday night, Braswell, who missed that game due to being sick, decided to turn to the 5 to 1 defense, a strategy that helped the Matadors (5-10, 2-3 Big West) a year ago.

“I was a little disappointed after the last game, we didn’t play with a lot of passion,” Braswell said. “My challenge to them tonight was to lay it all out and play hard.”

The 5 to 1 is when the lineup on the court allows five points or one offensive rebound, then Braswell will immediately pull all five players for five new players.

“Coach (Braswell) went to the 5 to 1 like he did last year,” said Vinnie McGhee, who scored a game-high 16 points and dished out six assists. “(We) Just focus on getting stops. If they give up five points then we’re going to come in and we’re going to get stops, too. The focus is straight on defense.”

Not only did the 5 to 1 help CSUN’s defense, it also benefited the offense.

“What (the 5 to 1) doesn’t get a lot of credit for was, if you look at last year, we got a lot better offensively,” Braswell said. ‘Guys are a lot more relaxed because what happens on offense doesn’t really matter. The pressure comes on getting stops and keeping them from getting second shots.”

The Aggies build their lead with hot shooting from three-point range. UC Davis went 13 of 24 from long range but only converted on one 3-pointer in the final seven minutes.

“It felt like they weren’t missing. It was frustrating at times,” McGhee said. “We just stayed on them and said they will start missing some and get tired and that’s what happened.”

The volleyball turned basketball player Ari Feldman hit a clutch 3-pointer to give CSUN a 16-0 run and a 76-71 lead with 2:36 left to play.

“That’s what I do, I shoot,” said the six-foot-nine forward Feldman jokingly. “I had confidence in my shot so I just let it go.”

In the first half the Matadors had to overcome a larger deficit. McGhee’s 3-pointer at the 4:30 mark erased the Aggies’ 13-point advantage.

With the win CSUN snapped a two-game losing streak, but added misery to UC Davis’ dreadful season. The Aggies have only won one game this year and are currently on a 13-game losing skid.

The Matadors now go back on the road to face UC Santa Barbara, the team that eliminated them from the Big West Tournament last season.