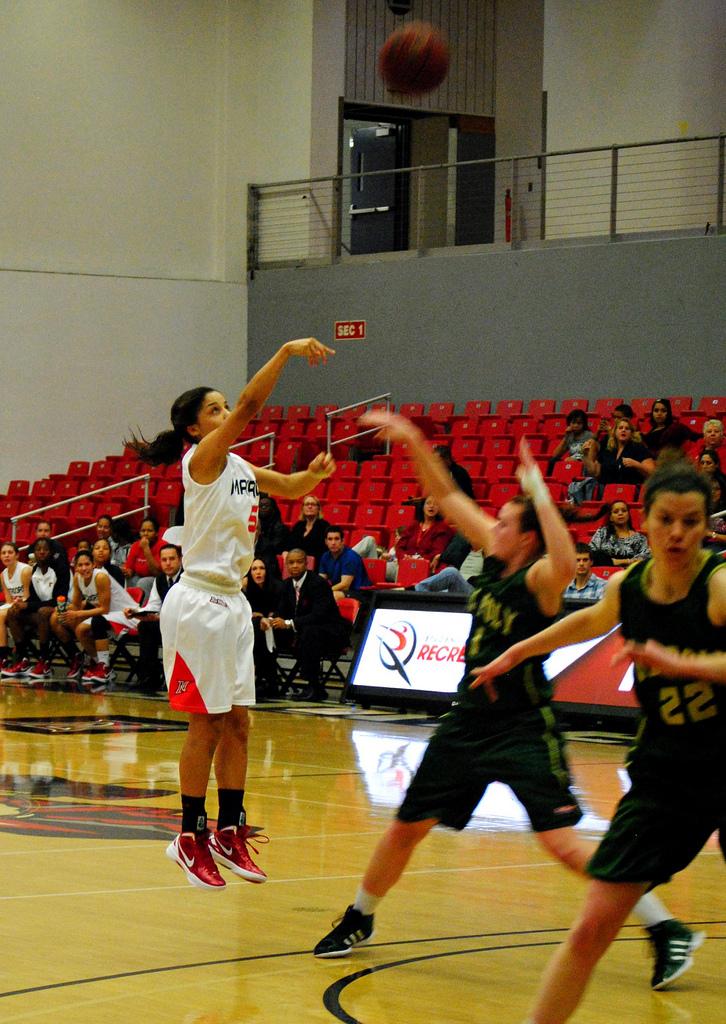 It had been a close game the entire night, and with 1:59 left to play, it was anyone’s guess as to who would come away with a win in this Big West Conference showdown.

After numerous missed shots from both sides, it was CSUN (10-8, 5-1 Big West) that came up with a critical steal that resulted in the game-winning basket to defeat Cal Poly (6-11, 3-2) 79-77 Thursday night at the Matadome.

Matador forward Violet Alama came up with the steal after a pair of failed Mustangs’ put backs. Once Alama had possession of the ball, CSUN head coach Jason Flowers called for a timeout to draw a play.

“I just had an easy layup at the end,” Alama said, finishing the game with nine points and eight rebounds. “Coach (Flowers) drew up a really good play and all of Cal Poly thought it was going to Jasmine (Erving), and then it left me wide open. Haley (White) made a good pass.”

Though Alama scored the game-winning layup, CSUN’s victory would not have been possible without freshman guard Ashlee Guay’s performance.

Guay, who is not known for her shooting ability from long range, was perfect from behind the arc. She finished the game shooting 8-of-15 from the field but was 7-of-7 from downtown, scoring 23 points for the night.

“When I made the first one, I was like ‘Alright, I made a three,’” Guay said. “Then when I made the third one, that’s when shock kicked in. I was just really happy and proud that I was able to be confident enough to continue shooting because that hasn’t been my high lately. It was a pretty unforgettable night.”

The freshman guard wasn’t the only one with an unforgettable night. CSUN center Jasmine Erving, who has been on a slump as of late, was back in regular form. She finished with a double-double of 19 points and 11 rebounds and had five blocks to her name.

“I thought (Erving) was huge,” Flowers said. “She had 19 points and double figures in rebounding. When she rebounds the basketball the way she did tonight, it just puts her in a more aggressive mindset. I think she carries that over to the offensive end.”

CSUN guard Janae Sharpe came up short of a double-double of her own, but still had a solid night as she scored 13 points and dished out nine assists.

The Matadors hard-nose defense against Cal Poly, who shot 39.7 percent from the field. The Mustangs had 10 turnovers while CSUN had seven blocks and five steals. Despite playing solid defense, Northridge and Cal Poly ended the game with tied scores and 10 lead changes. One player that gave CSUN problems was Mustang forward Kristina Santiago, who finished with 20 points and seven rebounds.

“They’re a good offensive team and they showed it,” Flowers said. “Kristina Santiago is a very good basketball player. Coming in here, she was third in the country for scoring. In the first half I think we did a pretty good job of taking care of making her take tough shots.”