Men’s volleyball: CSUN overcomes deficits to get by LBSU in five 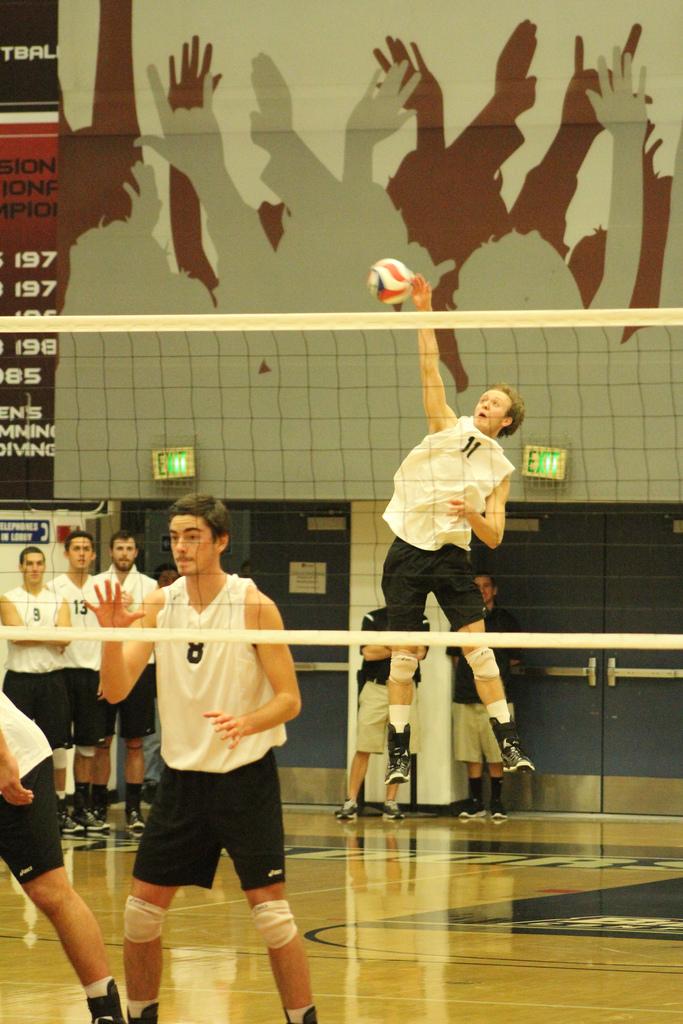 A mistake-filled first set gave the impression the Matadors would be in for a long night (or a very short one) against No. 8 Long Beach State Friday night at the Matadome.

On its way to a 25-15 first-set loss, CSUN had practically given the frame away by recording eight serving errors.

But momentum can be revived. Despite virtually spotting the 49ers a 1-0 lead, the Matadors settled down in time and kept that energy alive all the way into a fifth set, which they won to take their first conference victory of the young season.

“We figured it out after the first set,” CSUN opposite hitter Julius Hoefer said.

The Matadors (2-4, 1-2 MPSF) definitely looked improved after the initial frame. After only making good in .088 of their hits, they tied things up with a 25-20 second-set win by hitting .417 and committing only four attack errors.

The quality hitting for the Matadors continued in the third set, but Long Beach State (2-4, 0-3) grabbed momentum and the lead back by hitting .423 itself and winning 25-22. 49er outside hitter Brad Hemmerling had six of his team-high 11 kills in the frame.

Down 2-1 and with their backs against the wall, the Matadors made sure momentum went their way for the fourth set. LBSU hit .000, CSUN used a 7-0 run to build its lead to 15-6 and cruised to an easy 25-14 win to set up the take-all fifth frame.

“The most important part was that we were fighting,” said Hoefer, who had seven of his game-high 21 kills in the fourth.

Momentum was up for grabs with the score knotted up at 7-7 in the fifth. Three consecutive CSUN points swayed it to the Northridge side. LBSU drew within 10-9, but the Matadors kept it at bay and Hoefer finished the game off with a kill for the 15-11 win.

“In a fifth set, it’s just one or two plays,” Campbell said. “That’s the difference.”

In the game-defining frame, blocks were the plays Campbell was referring to. The Matadors had five timely team blocks while LBSU had just two. Two consecutive ones gave CSUN the four-point cushion it took to the end.

Hoefer had four of the Matadors’ six kills in the frame.

“It was all about the mentality,” he said. “We wanted to win more than (LBSU).”

“In the fifth set, everyone knew we were going to win and that’s about it,” said Stork, who finished with 17 kills.

Not everyone thought the victory would stay in Northridge to begin the night. Ineffective hitting and mistakes put the Matadors in a precarious position against the eighth-ranked 49ers. On this night, however, CSUN it found a way to dig itself out of the hole.

“We didn’t let the downplays affect us and we played strong the whole way through,” Stork said.