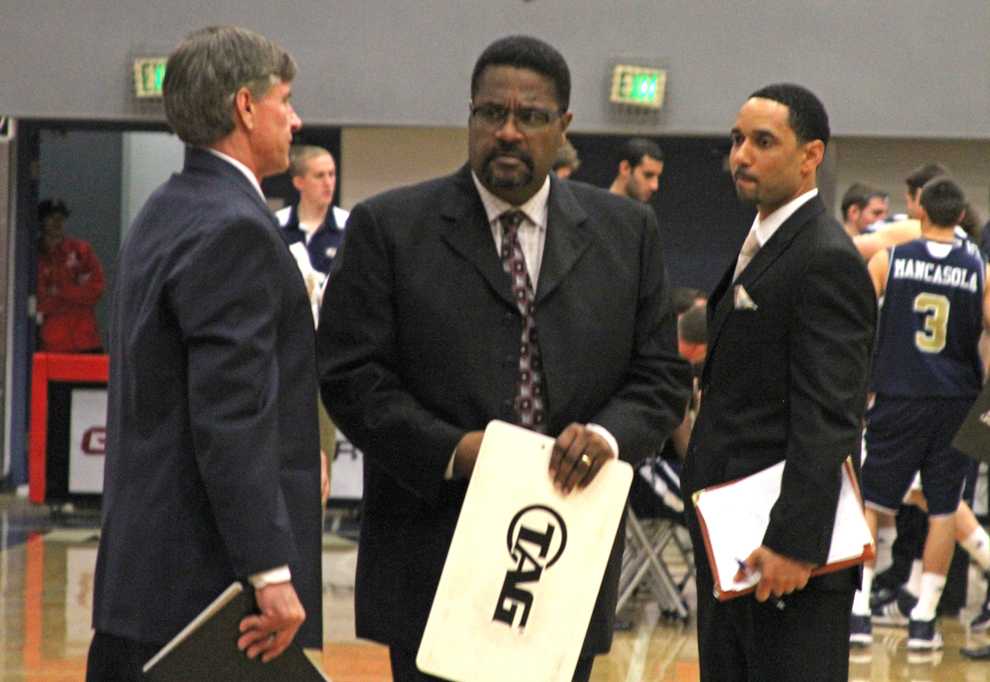 Head coach Bobby Braswell, middle, has yet to figure out how to get his team going offensively.

CSUN head coach Bobby Braswell has always preached to his team that if you play defense, the offense will come later, but with 17 games gone by, the Matadors’ offense has yet to be seen.

“You just keep preaching it, you keep doing it,” said Braswell after his team’s poor offensive performance paved the way to yet another loss at UC Santa Barbara Thursday. “You have to have some resistance and keep playing with heart. Keep fighting and keep believing and eventually it will turn around, but if you play good defense you’ll always give yourself a chance to win.”

CSUN hit rock bottom during Saturday’s 100-54 loss at Cal Poly, a game that was televised on Fox Sports Prime Ticket. The Matadors shot a season-low 23 percent and scored only 54 points.

“We need to have better preparation, go harder in shootaround. Everyone needs to pick it up individually and collectively,” sophomore Aqeel Quinn said. “I think we’re just rushing shots, that’s pretty much it. We need to take our time and know the ball will get swung back to you and take smarter, better shots.”

During CSUN’s two-game losing streak, the Matadors went a dismal 4-of-33 from three-point range and didn’t make a 3-pointer against the Mustangs.

Things have gotten so bad on offense that even CSUN’s high-scoring redshirt freshman Stephan Hicks had trouble finding the rim against Cal Poly’s smothering defense, which held the guard to eight points.

Before Saturday’s blowout loss, Hicks had scored 10 points or more in every game this season, a streak that reached 16 games.

Hicks has had a sensational rookie campaign thus far, leading the Matadors in points (16 ppg) and rebounds (7 rpg). Hicks ranks sixth in the Big West in points scored per game and is the only freshman in the top 15.

The 19-year-old has carried a huge load on offense for the Matadors, but said the team’s scoring will eventually pick up.

“We’ve missed a lot of shots, but they’ll fall,” said Hicks after CSUN lost to UCSB Thursday.  “I don’t let it frustrate me, I just stay positive.”

After missing the first four games of the year due to a quad injury, sophomore guard Quinn said it’s slowly healing.

“I was sad in the beginning of the year when I couldn’t play,” Quinn said. “The injury has gotten better. In the beginning I was a little bit concerned, but I just kept playing and going to treatment. I just kept grinding and slowly things are coming along.”

Quinn is averaging 9.2 points per game.