Women’s basketball: CSUN takes the show on the road to Fullerton 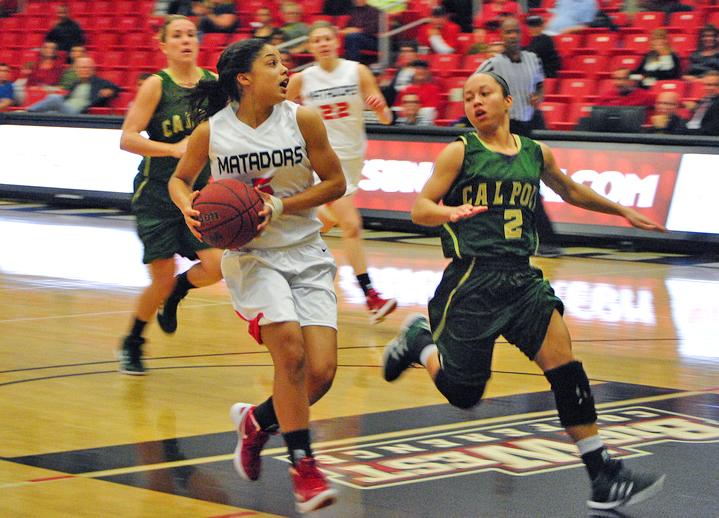 Finding itself tied for first in the Big West Conference, CSUN (10-9, 5-2 Big West) looks to bounce back from its double-overtime loss as it faces Cal State Fullerton (8-10, 1-5) tonight at Titan Gym.

This season’s current success has a lot to do with the combination of senior center Jasmine Erving and her leadership abilities and the energy and youth of freshman guard Ashlee Guay.

“(Guay’s) a worker,” CSUN head coach Jason Flowers said after the team’s win against Cal Poly. “As much as (Erving) is important as a senior leader, (Guay’s) energy, effort and presence out on the floor is huge for this team. She’s a tough kid. She’s done everything we’ve asked of her and more.”

Guay averages 9.7 points per game, but what is impressive is her defensive statistics. She currently has 67 steals which leads the team and the Big West. She also is ranked eighth in the nation in steals.
Averaging 3.5 steals per game, Guay is six steals away from breaking the CSUN women’s record of 72, held by Tina Greer since the 1998-99 season.

“It’s surprising. I didn’t know I was going to be where I’m at right now,” Guay said. “It’s a pretty good feeling to know that I’m capable of doing that and it’s just exciting that I can contribute to the team in that way.”

She isn’t the only player that is about to break a CSUN record. Erving, who has 31 blocks this season and 134 in her career, is just three blocks away from becoming the all-time block leader.

It has been a turnaround season for the Matadors so far. After ending the 2010-11 season with a record of 4-26, Flowers has seen his squad change before his eyes.

CSUN’s first win last year came 13 games into the season during its first Big West game, against Pacific. Fast-forward to this season, the Matadors got their fourth win by their sixth game.

“The returning players came back with a better understanding of what needs to be done,” Flowers said. “The newcomers came in and got to work right from the beginning, and I just think that, all-around, our players are better prepared for what it takes to be successful at this level.”

All seven Big West games for the Matadors have come down to the wire, with no game being decided by more than eight points. But Flowers realizes that it is only the beginning of the Big West season. Cal State Fullerton is the next stop for CSUN as it continues to aim for a spot in the Big West Tournament.

“Coming into the conference, I thought that it would be a lot of teams knocking off other teams. I thought it would be unpredictable,” Flowers said. “We still have a ways to go. This deal is far from being over for any stretch of the imagination for anybody in this conference.”