Men’s volleyball: Matadors travel to Westwood to take on No. 3 UCLA 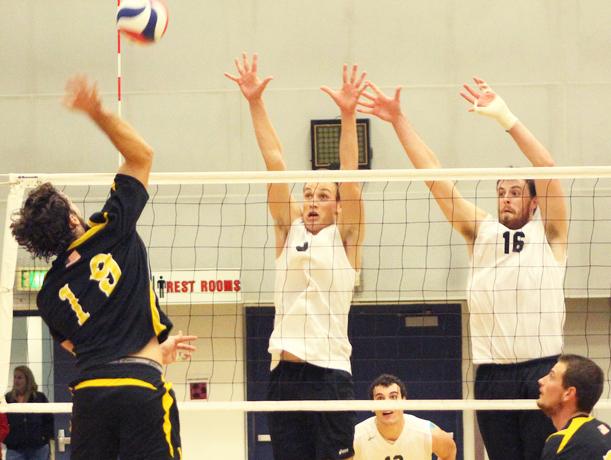 Coming off a down-to-the-wire victory, CSUN is looking to get on a winning streak at UCLA tonight at the John Wooden Center.

The Matadors (2-4, 1-2 MPSF) pulled off a thrilling five-set win in their last game against the then No. 8-ranked Long Beach State 49ers Friday night in the Matadome.

After exchanging victories in the first two sets with the 49ers, CSUN dropped the third and put itself in a 2-1 hole. The Matadors attack managed to finish with solid play in the fourth and fifth sets to steal the come-from-behind victory and claim their first Mountain Pacific Sports Federation win of the season.

With the new-look Matadors still buzzing over the win, CSUN will look to bring some of that momentum to its matchup with the No. 3 Bruins (7-1, 2-0 MPSF) in hopes of handing UCLA their first conference loss of the year. The Bruins’ lone loss this season came at the hands of their MPSF foes, UC Irvine, earlier this month.

“UCLA is a great serving team,” Campbell said. “Ultimately we have to serve a pass well to compete with any team at a high level. We know that they’re going to be a good team. We just have to serve and pass. We know they’ve got some big middles and we’ve got to slow those guys down and hopefully we’ll do that with our serving.”

This is the second meeting between the CSUN and the Bruins this season, but outside hitter Matt Stork does not see the need to turn this into a revenge match.

“I’m not a guy big on revenge, but we just need to come out steady and we’ll be fine,” he said.

For the Matadors be successful they will surely look to opposite Julius Hoefer to keep them in the game. The freshman tallied 21 kills in their victory Friday night against LBSU as well as hitting .286 on 42 swings.

So far this season, Hoefer leads the Matadors with 79 kills on 178 attacks for a .219 hitting percentage. Although Hoefer is only a freshman he has proven to be one of the leaders of this young CSUN squad leading the team in points with 97.

The next highest point-scorer for CSUN is Stork. The 6-foot-5 senior has also had a stellar year with 62 points of his own. Stork has earned 55 kills in 156 swings this season, but will surely be looking to make his final season of eligibility count.

“We need to make sure that our passing doesn’t break down,” Stork said. “Besides that, everything is pretty good.”

Both Hoefer and Stork’s play on the net will be key during Wednesday’s matchup against UCLA and will also play a huge factor throughout the rest of the year.

UCLA leads the overall series against CSUN 56-12 and in order for the Matadors to avoid the Bruins extending that lead, they’ll have to try and slow the attack game of UCLA.

“We’ve got to make sure that we get some blocks and make sure we kill,” Stork said.

UCLA comes into the match with four players having at least 68 kills this season with redshirt senior Weston Dunlap leading the charge. The 6-foot-8 quicker hitter leads all Bruins with 78 kills on 123 swings, good enough for a .553 hitting percentage.

The troubles don’t stop there for the Matador defense as fellow UCLA quick hitter Thomas Amberg and senior outside hitter Jeremy Casebeer both have over 70 kills apiece.

CSUN middle blockers Greg Faulkner and Drew Staker might have their work cut out for them but if the Matadors can play like they did against Long Beach, they’ll have a chance to get their second win in a row.