Men’s volleyball: Matadors’ poor passing gives them no chance at No. 3 UCLA 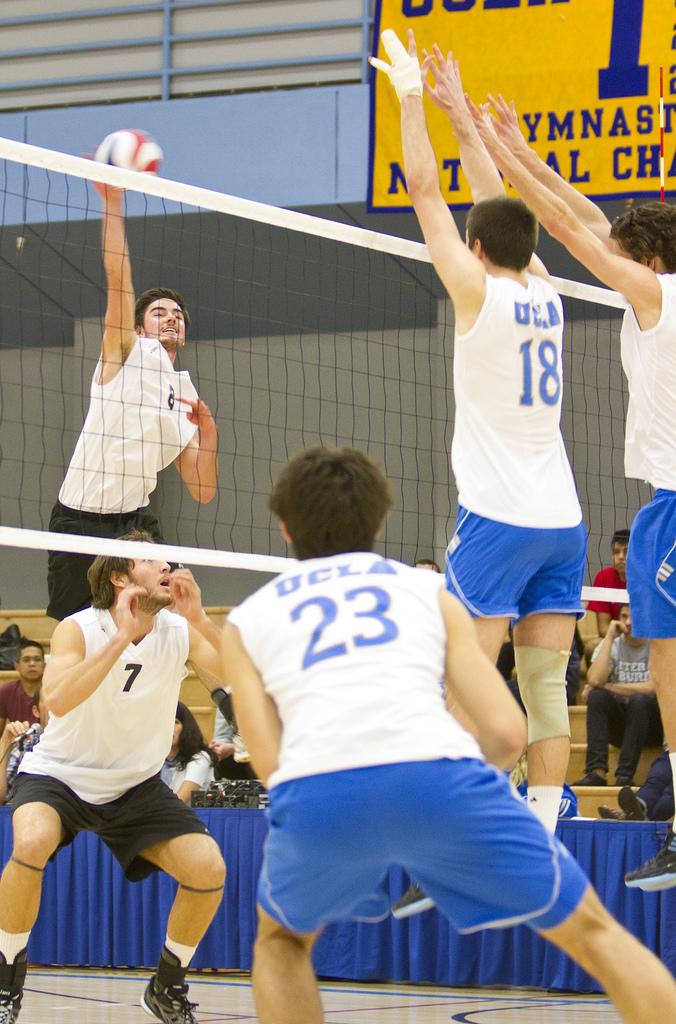 Westwood – Despite just having gotten swept emphatically by No. 3 UCLA, CSUN outside hitter Julius Hoefer showed a lot of conviction in expressing most of the credit for the Bruins’ victory Wednesday night belonged to the Matadors.

“They (the Bruins) didn’t really beat us, we beat ourselves,” said Hoefer, who led the Matadors with nine kills during the 25-18, 25-15, 25-12 Mountain Paficic Sports Federation loss at the John Wooden Center. “We were passing badly, we didn’t kill anymore. We beat ourselves.”

It certainly didn’t look as if UCLA (8-1, 3-0 MPSF), one of the top teams in the country and playing at home, needed any help. The Bruins got better on the attack as the match went on and also made it difficult for No. 9 CSUN (2-5, 1-3) to get into any kind of offensive rhythm.

CSUN head coach Jeff Campbell echoed Hoefer’s sentiment that passing wasn’t at its highest level for CSUN on this night. He, however, chose to give UCLA some credit for his team’s struggles on offense.

“A big reason was the way UCLA served. They served very well,” Campbell said. “We didn’t pass well enough for us to compete. We have to pass at a high level. In order to do that, we’ve got to handle these tough serves a lot better.”

Knowing they had their work cut out for them, the Matadors got off to an auspicious start, battling back from an early first-set deficit to tie the score at 16-16 and forcing the Bruins to take a timeout.

Following the pause, however, UCLA went on a 9-2 set-finishing run. There were few positives after that.

“We kind of got a little nervous because we didn’t win that first game,” said CSUN senior outside hitter Matt Stork, who was limited to three kills. “It kind of went downhill from there.”

As UCLA got more comfortable on its home floor, the second and third sets weren’t close at any moment. And with CSUN not on its best passing night, the Bruins’ defense took over. Contributing to the Matadors’ negative hitting percentage in the third were UCLA’s 8.5 blocks.

“We had only one or two options on offense and they knew where the ball would come,” Hoefer said. “That’s why they always had a good block against us.”

Hoefer felt the Matadors “gave it away,” but the Bruins clearly had something to do with forcing the gift their way. Their serves were as potent as their offense, which hindered the Matadors’ ability to set their own offense up.

All in all, it was just a match between a young CSUN team starting four freshmen against an experienced powerhouse starting five seniors. At times, it didn’t even seem to matter how many CSUN players went up to challenge the Bruin attackers at the net. The ball would always find a way through the Matadors’ outstretched ghostly arms.

“It definitely seemed like that … they’re just a really good team,” Stork said. “They kept us out of system.”

With Cal Baptist paying a visit to CSUN Friday night, there will be little time to dwell on this loss, which might the best for the Matadors. It certainly seems like a sweep by a team like UCLA did little to shake some of the players’ confidence.

“We proved we can beat them,” Hoefer said. “But we got to play hard, and we didn’t do that.”