Men’s basketball: CSUN continues to improve on offense, leads to win at Bakersfield 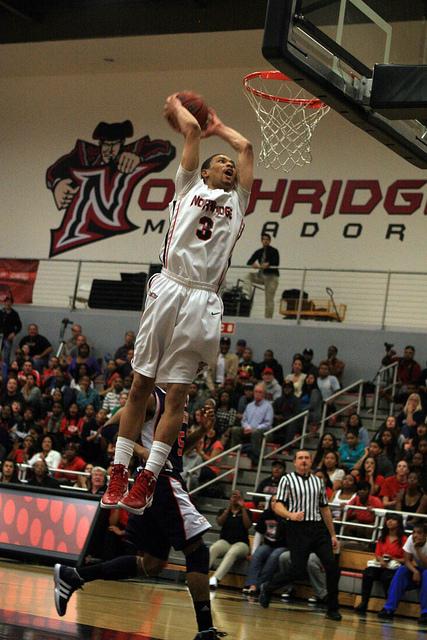 Gilberto Manzano
After having one of their best offensive performance in a two-point loss to Cal State Fullerton Thursday, the Matadors picked up right were they left of as they shot a blazing 61 percent from the field en route to a 76-68 non-conference victory over Cal State Bakersfield Saturday night at the Icardo Center.
High-scoring redshirt freshman, Stephan Hicks, dropped a career-high 26 points to lead a Matadors (6-13, 2-6 Big West) team that had four players in double-figures, including 16 points from sophomore guard Josh Greene.

Despite the offensive surge, the Matadors had a tough time putting the Roadrunners (11-11) away. After leading by as many as 13 points, CSUN found itself with only a four-point advantage with 3:39 left in regulation.

The game remained a four-point difference up to the one minute mark and CSU Bakersfield had an opportunity to cut into the deficit. However, Donald Johnson, who scored a team-high 18 points off the bench, missed two shots.

Eventually the Matadors put the game away at the free throw line as they snapped a three-game losing streak.

Things have been so bad on offense for Northridge that its 76 points scored marked only the second time in the last 10 games that they scored over 70 points. CSUN managed 84 points in a win against UC Davis Jan. 14.

Even though the victory didn’t count in the Big West standings, the Matadors were in need of a pick-me-up game. CSUN gave up a game-winning layup to Kwame Vaughn in a 70-68 loss to Cal State Fullerton Thursday and were blown out by 46 points last Saturday at Cal Poly.

CSUN went 25-of-41 from the field and connected on 18 out of 23 free throw attempts. The Roadrunners also put up solid numbers on offense, shooting 45.7 percent from the floor and going 21-of-25 from the charity stripe.

The game was probably lost for Bakersfield at three-point line after missing 12 of its 17 3-pointers.

CSUN and CSUB had identical numbers on the stat sheets.Both teams had four players score 10 points or more, 18 assists, 12 steals. Also, the Matadors had 21 turnovers compares to the ‘Runners 20.

CSUN went into the locker room ahead 41-35 and started the second half with a 7-0 run to increase its lead to 48-35.Northridge returns to Big West action Thursday with a home game against UC Santa Barbara, a team the Matadors lost to 69-61 Jan. 19 at the Thunderdome.
Delete Image
Align Left
Align Center
Align Right
Align Left
Align Center
Delete Heading