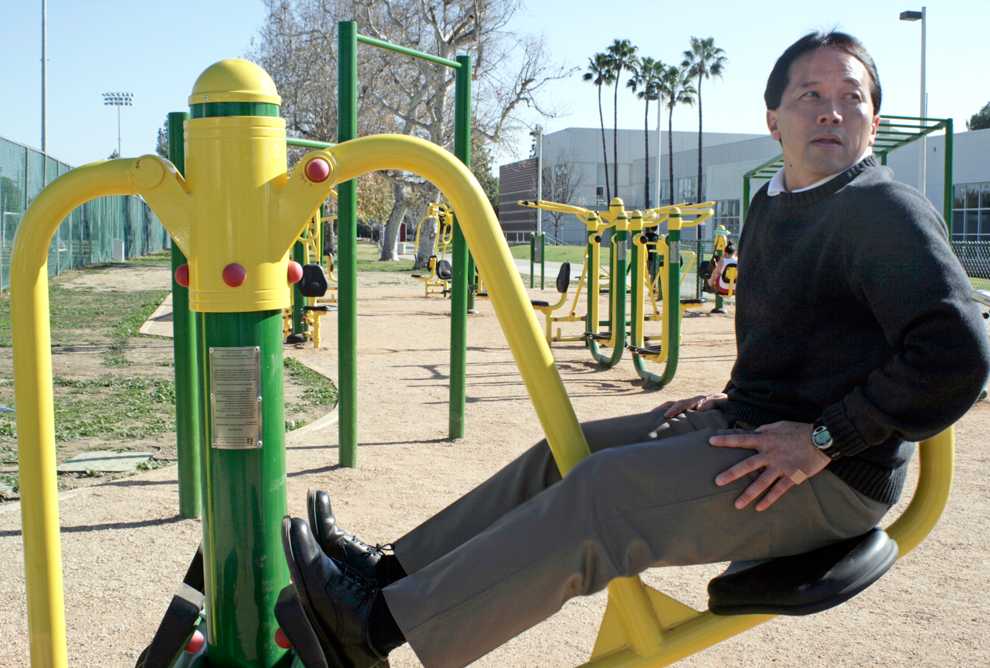 The Kinesiology Department has recently unveiled a new outdoor “ExerCircuit” parcourse for CSUN students, faculty and the surrounding community.

“The periphery, if you will, allows a person to actually do a circuit. They can go through each individual item and stand 30 seconds, or about 15 repetitions on each one, and progress through it in about 10 minutes,” Loy said.

Loy envisioned an exercise program to help both the physically fit and unfit alike. After seven years of planning, and eventually receiving enough funding, his idea became a reality.

“The appertain was to create something that allowed both the person who was in condition to be able to access equipment and challenge them, as well as use equipment that would be more entry level for someone who perhaps wasn’t as well-fit,” Loy said.

Some of the equipment was  donated to CSUN by ShapesInShape, an innovative exercise machine company. The static pieces and installation, which cost about $60,000, was funded by the student allocation portion of campus quality fees, according to Sharon Eichten, associate vice president for budget and planning management.

One enticing feature of the parcourse is that each of the 15 stations have two identical sets of equipment.

“The whole design is based on the fact that you’re supposed to bring a friend. With every piece, you’re always with someone that you can do it with,” Loy said. “If you’re doing it with friends, you’re talking the whole time, and it makes it a little more fun.”

Christian Diaz, a freshman with an undecided major, was using the equipment Tuesday with a friend.

“There’s a flow to the circuit so you get pretty used to it. You just kind of follow it around,” Diaz said. “At first, I thought it was a playground — and then, when I got a closer look, I noticed it was a workout station. It’s pretty cool. It gets you tired.”

This generation is less physically fit than the preceding one, with obesity being a leading culprit, Loy said. This spring, the kinesiology department will be utilizing the equipment to jump start a program aimed at overweight and obese students.

“What we are likely going to do is target body mass index. A BMI over 25 is considered overweight, and over 30 is obese,” Loy said. “If you’re BMI is more than 27, then this program is for you.”

Maira Rodriguez is a second-year anthropology student who lives in the dorms, and was using one of the stations Tuesday afternoon.

“I just use it to exercise and just kind of use the machines I know how to work. I’m just barely building my endurance, so I’m not at the level to use all the equipment,” Rodriguez said.

For students living in the dorms, Loy recommends a brisk walk from the dorms to the parcourse followed by a complete run-through of the circuit and finished by a brisk walk back home. This should take about 30 minutes.

“One of the things that’s important is that the Center for Disease Control and Prevention (CDC) recommendation for exercise is about 30 minutes of moderate exercise most days of the week. The emphasis now is on the minimum – walking – and so people think if they do only that, they’ll be OK,” Loy said. “Then they are unable to engage in those other activities because they don’t have that fitness. This can provide that for them.”