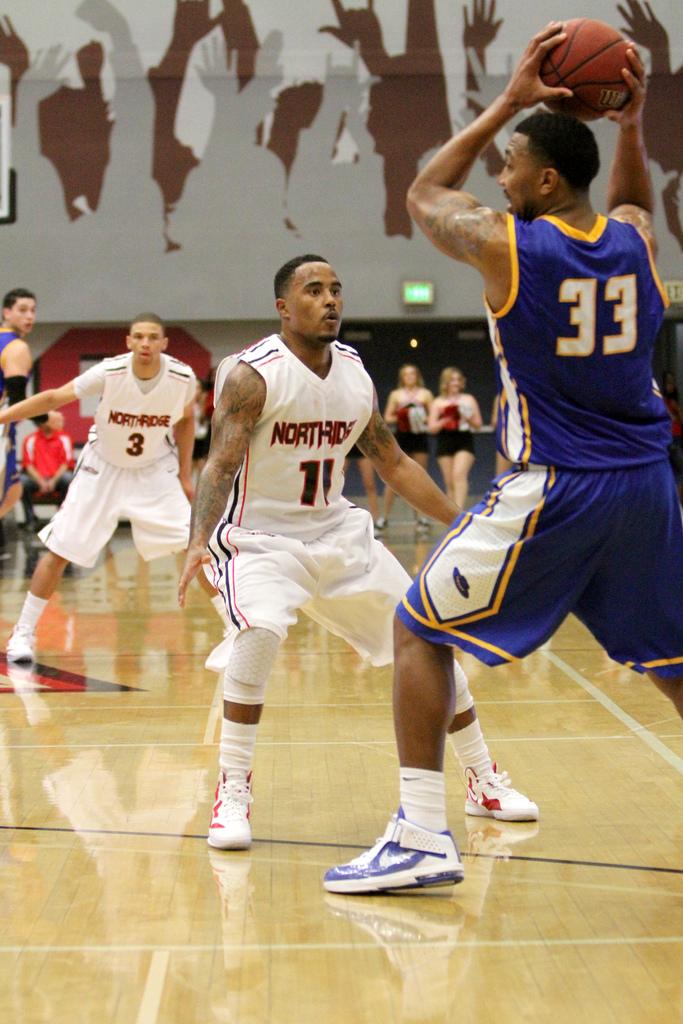 As the season has progressed, the Matadors’ defensive effort has improved in such manner that at times it has pleased the sometimes-seemingly-unpleasable Bobby Braswell.

Even as the Matadors lost by 46 points at Cal Poly on Jan. 21, Braswell showed satisfaction over his team’s effort and scrappiness.

Fast-forwarding to late Thursday night, however, it was safe to say a lot of the fulfillment the coach felt about his young team went out the window during an 85-70 loss against UC Santa Barbara.

“Our defensive effort wasn’t what I wanted it to be,” Braswell said.

In a game where the Gauchos (12-7, 7-2 Big West) shot 56 percent from the field (68 percent in the second half), it was of little surprise as to why Braswell was disappointed with what’s always been his No. 1 priority: defense.

The Matadors (6-14, 2-7) only trailed by two early in the second half before the hot Gauchos went on a four-minute 18-6 run and took a 57-43 lead. There were still 13:27 left to play, but CSUN’s inability to slow down UCSB offensively made it almost impossible to cut into the lead significantly.

As the Gauchos buried shot after shot and built their second-half shooting percentage up to 68 percent, CSUN trailed by double digits the rest of the way.

“Tonight, we couldn’t get a stop,” Braswell said.

It didn’t help that UCSB’s stars were on a good night. Big West leading scorer guard Orlando Johnson went 10-of-20 on his way to a game-high 25 points and big man Alan Williams, whom Braswell called a “beast” on this night, dominated the paint and had 19 points and nine rebounds.

It also didn’t help that the Matadors couldn’t buy a bucket. Against the top-ranked defense in the Big West, CSUN shot 38.5 percent for the game.

The Matadors kept it close in the first half despite their poor shooting, mainly due to making six of 14 3-pointers. In the second half, however, they only made two of their nine attempts.

CSUN guard Josh Greene was the biggest reason the Matadors only trailed 38-31 at halftime. He made four 3-pointers and scored 13 points in the opening period.

Greene didn’t make a single shot the rest of the way and finished with 15 points and four assists.

“I wasn’t really that aggressive in the second half, but other people were making plays,” Greene said.

That other someone was CSUN leading scorer guard Stephan Hicks, who had zero points in the first half. In the second, however, he attacked the rim relentlessly. He finished with 12 points.

On a night in which CSUN couldn’t stop the opposition to save its life, though, it might not have mattered if Hicks went 20-for-20. UCSB was just superior on both ends of the floor.

“You got to give (UCSB) credit,” Braswell said. “They’re very experienced and talented.”

Braswell still recalls the days in which his squad was just as experienced. These days, with a team consisting of mostly freshmen and sophomores, he’s trying to “teach” and build for the future.

And the road doesn’t get any easier for his young team. Up next on Saturday is Long Beach State, which is a perfect 9-0 in Big West play.

“We get an easier game on Saturday so …” said Braswell, rolling his eyes.

Not a pleased coach on this night, but Braswell at least still has a sense of humor.