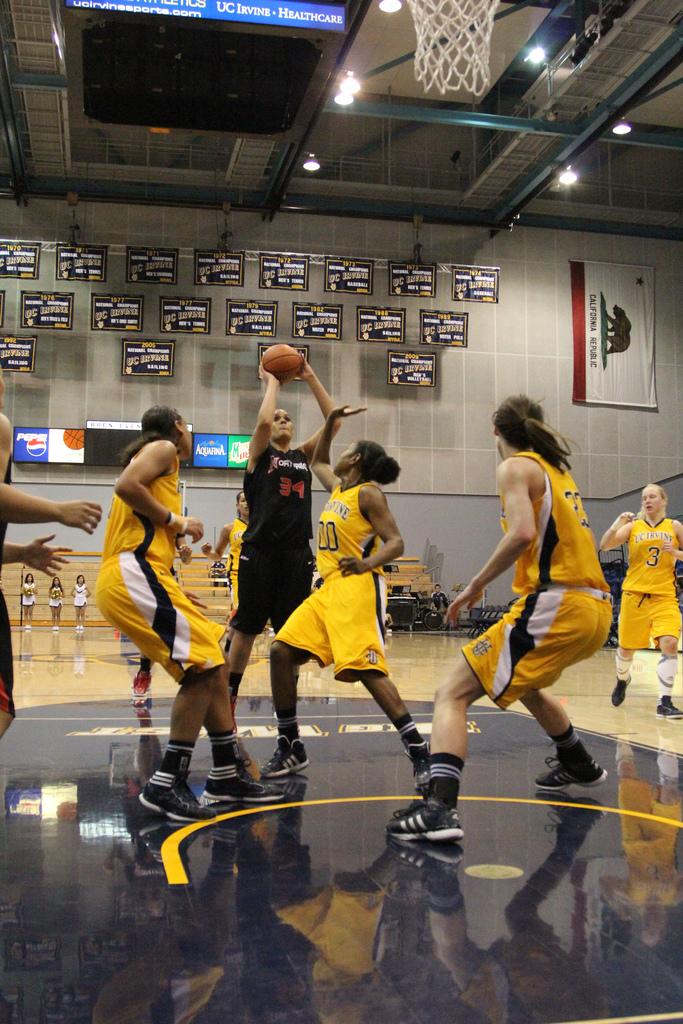 IRVINE – Consistency was something CSUN head coach Jason Flowers has rarely seen with his team. In most of their Big West Conference wins, the Matadors have usually found themselves either trying to hold on to a slim lead or coming back from a deficit.

“I think this game was as close to 40 minutes as we’ve played all year,” Flowers said. “It was a situation where we got off to a really good start, which was good for us because we’ve been starting slow.”

One player that didn’t start off slow for the Matadors was center Jasmine Erving, who went into halftime with 15 points and ended the night with a career-high 36 points on 16-of-22 shooting.

Though she scored almost half the points for her team, she chose to give credit to her teammates.

“I was definitely in the zone,” Erving said about her second-half shooting performance. “It helps that our guards were attacking the basket and our other posts were making shots also. They weren’t always focused on me. It was a group effort.”

Besides Erving’s all-around dominance on the court, forward Camille Mahlknecht was the Matadors’ second option in terms of scoring. She posted 11 points, four rebounds and three steals for the night.

Despite being up by as many as 22 points, the Matadors continued to crash the boards and find open players in the paint.

“Our kids didn’t fold. They keep fighting,” Flowers said. “It’s a testament to the kind of kids that we have and the character that they have.”

The key to CSUN’s victory was penetration in the paint, where the Matadors scored 20 points.

“We had a height advantage, so we were definitely trying to use that and our guards were getting good looks to us and we were able to catch and finish,” Mahlknecht said.

CSUN’s offense was firing in all cylinders and didn’t seem to be able to miss early in the game. The Matadors looked for a teammate in the paint time and time again and capitalized on nearly every chance they got.

Northridge shot 45.9 percent in the first half. It continued to build on that shooting performance by making 17 of its 29 shots (58.6 percent) in the second half, finishing the game with a solid 51.5 percent.

It was Mahlknecht and  Erving who led the team to their 45-39-halftime lead. Aside Erving’s 15 points in the period, she grabbed six rebounds and had four assists as well.

The Anteaters’ 3-point shooting kept them in the game for a while. They made five of their six 3-pointer attempts in the first half. Guard Kassandra McCalister knocked down all four of her shots from behind the arc and finished 5-of-7 for the night.