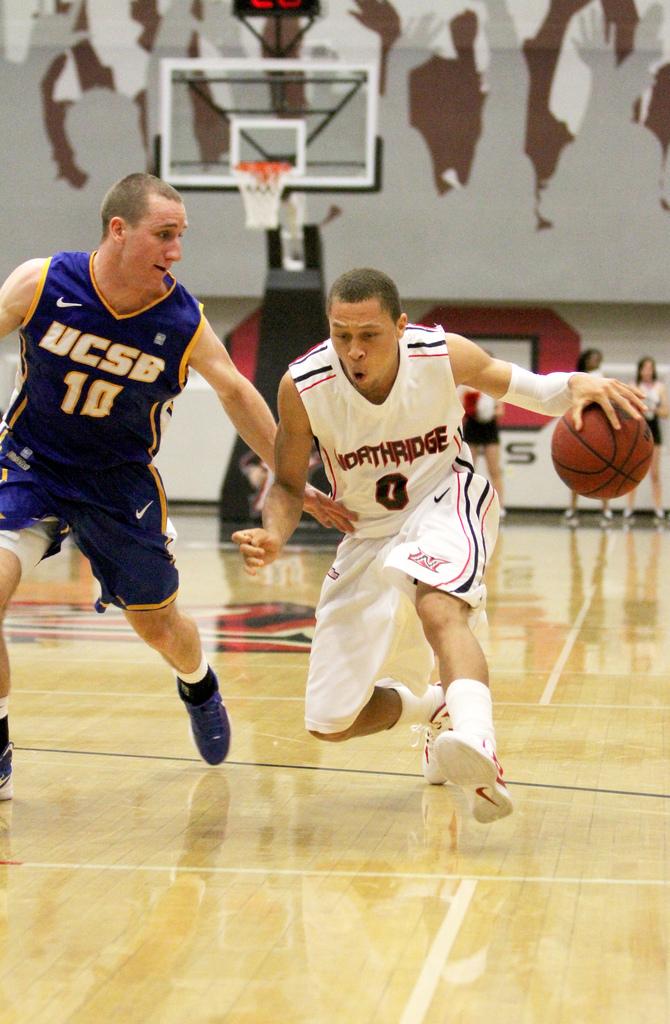 LONG BEACH, Calif. — Instead of taking the moral victory against the top team in the Big West Conference, CSUN was thinking of what could have been.

With the game tied at 54-54 and a little over nine minutes left in regulation Saturday night at the Walter Pyramid, the young Matadors had the first-place 49ers on the ropes.

CSUN was the underdog trying to record only its third league win while Long Beach State had its Big-West regular season and home winning streaks on the line.The Matadors were doing everything right, even holding the reigning Big West player of the year, guard Casper Ware, to a season-low five points.

But there’s always that one bad stretch for CSUN.

“We have stretches were we play with really high intensity or play smart, but then we always go through that one stretch that’s too long and we get fatigued and lose focus mentality,” said freshman forward Stephen Maxwell.

Behind freshman Mike Caffey’s seven straight points, Long Beach State build a nine-point lead and never looked back, taking a 75-67 victory over the Matadors and staying a perfect 10-0 in league play.

CSUN guard Josh Greene had a career-night with 26 points, but the teammate Stephan Hicks, the Matadors’ leading scorer, had an off night.

Hicks went scoreless in the first half before going on a hot second-half streak where he scored nine consecutive points. The last of his points tied the game at 54.

“I told him to keep being aggressive,” Greene said about Hicks, who failed to score 10 points or more for only the second time this season. “We all know (Hicks) can score and take what the defense gives (him). (LBSU is) long and athletic just like he is.

“He needs to find a way to be clever to get his shot off against a Larry Anderson or James Ennis.”

Long Beach State (17-6, 10-0) extended its home winning streak to 19 and has not lost a conference game in 18 tries. CSUN dropped its sixth consecutive game to the 49ers.

Long Beach State had five players in double-figures, with Anderson’s 16 leading the way. The potential NBA player, Ware, had a dreadful night, going 2-of-15 from the field and 1-of-10 from three-point range.

“I think we did a good job with team defense, knowing where (Ware) was and contesting all his shots,” Greene said. “Also, denying him the ball and making him guard on defense.”

One reason CSUN couldn’t come up with the upset over the 49ers, who beat the likes of Pittsburgh and Xavier earlier this season, was their physicality.

“It was like men and boys out there,” CSUN head coach Bobby Braswell said. “If you look at it from a physical standpoint, (the 49ers) were just so physical and so much bigger and stronger than we are at this point.”

The 6-foot-5 Maxwell, who’s been dealing with sprained tendons on his foot, had to face the 49ers physical big men, but said the Matadors’ team effort kept them in the game.

“We know we’re not the most talented team, but it’s our effort and playing together what gets us by,” said Maxwell, who scored 10 points.

Both teams shot 41 percent from the field and made seven 3-pointers. CSUN won the battle on the boards with 40 rebounds compared to LBSU’s 38.

The 49ers went to the free throw line 39 times, more than double the number of times CSUN shot a free throw (17). LBSU only made 22 of the attempts (56 percent) while the Matadors made 12.

With the Matadors having some talented freshmen and sophomores, they could follow the path of a 49ers’ veteran squad that’s been together for some years now and eventually become a power, but Greene isn’t trying to mimic them.

“We’re trying to be our own team and make our own history,” Greene said. “They set the blueprint of being a top team, but we just showed the world we can beat them.”