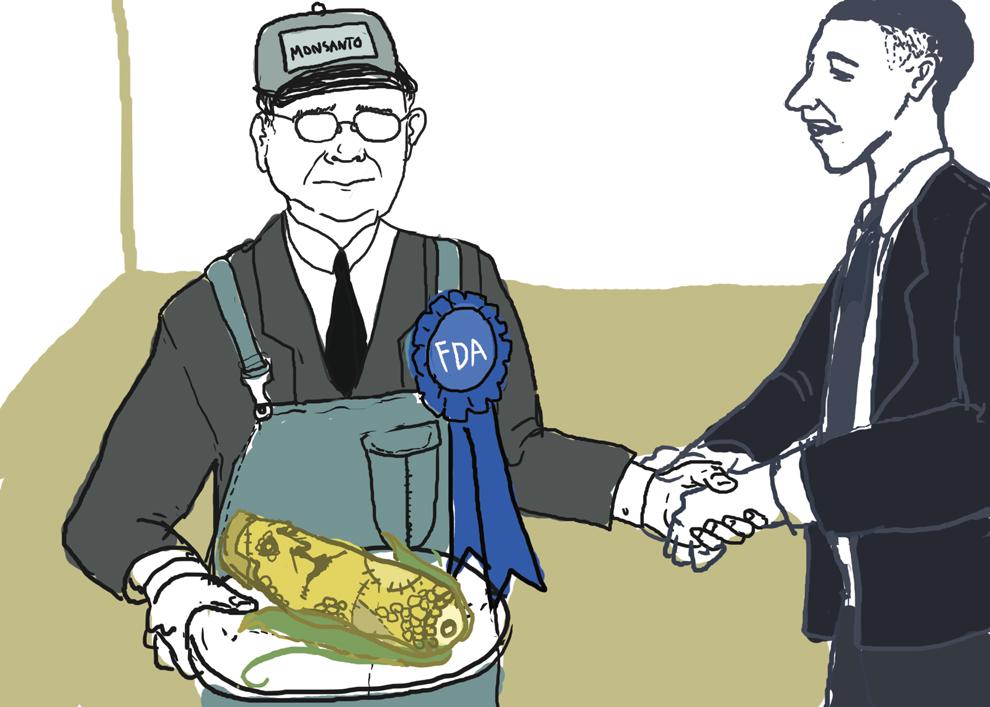 Imagine this: corruption, conflicts of interest and hypocrisy. Sounds like a bad daytime television show.Think again. It’s just another day at the White House.

A recent viral petition challenges Obama’s 2009 appointment of Michael Taylor, former vice president of public policy at Monsanto, a multinational agricultural biotechnology corporation, as food safety adviser to FDA commissioner Margaret A. Hamburg. Since its creation a little more than a week ago, more than 226,000 people signed a petition on signon.org to revoke Taylor’s appointment.

Monsanto proponents argue that the company’s work saves lives and increases agricultural efficiency. With products such as “drought-resistant” wheat sold to countries hard hit by the weather, some feel Monsanto’s intentions are genuine. However, it is using euphemisms to sugar-coat the poisonous nature of these genetically modified ingredients.

Monsanto?
The Natural Society, a group that delivers news on natural healing, voted Monsanto as Worst Company of 2011, due to Monsanto’s role in a litany of dirty deals. Chemicals such as Agent Orange, which was manufactured as a weapon during the Vietnam War, and the deadly pesticide Roundup, are also Monsanto products.

Another one of their claims-to-fame has been pioneering genetically modified organisms, GMOs, as a staple of the American diet.

“It has been estimated that upwards of 70 percent of processed foods on supermarket shelves – from soda to soup, crackers to condiments –- contain genetically engineered ingredients,” said the Center for Food Safety, a nonprofit advocacy group that promotes sustainability and speaks against harmful food technologies.

“Human health effects can include higher risks of toxicity, allergenicity, antibiotic resistance, immune-suppression and cancer,” according to Center for Food Safety. The Center says that, “the use of genetic engineering in agriculture will lead to uncontrolled biological pollution, threatening numerous microbial, plant and animal species with extinction, and the potential contamination of all nongenetically engineered life forms with novel and possibly hazardous genetic material.”

Monsanto’s work is toxic. No smoke and mirrors here. Monsanto’s sole contribution to society is death, wrapped up in a shiny package, marketed with buzz words like, “drought-resistant crops.” At what cost?

Michael Taylor
During his time with Monsanto in the 90s, Taylor oversaw the integration of genetically modified organisms into the U.S. food supply. He went to great lengths to block testing to weigh any potential safety risks to the population or the environment.

According to a recent Washington Post article, between 1991-94 he also managed Monsanto’s policies with the infamous GM bovine growth hormone, rBGH, or simply put: dairy, literally, on steroids. Monsanto lobbied to ban labels advertising dairy as being rBGH-free to prevent competition from organic dairy farmers, but failed. Consumers can pick up a gallon of milk today in the grocery store and can be more informed to make healthier decisions based on labels declaring certain dairy rBGH-free.

NPR reported about the “Green Revolution” implemented in India, where policymakers in the U.S. convinced India into opting out of their “antiquated” farming practices and switch to using high-yield crops, pesticides and irrigation practices. Now, there are throngs of Indian farmers who are broke from the infrastructure set up to farm the “right way.” They’re falling ill from the exposure to the toxic chemicals and the soil is depleted of its nutrients from the accelerated crop lives.

Taylor’s work with the Rockefeller and Bill and Melinda Gates foundations to infiltrate African markets pushed GMO seeds into their food supply, as well, according to the Organic Consumers Association.

He goes on to describe natural African farming as “archaic, near-subsistence agricultural economies” that need a “market-oriented approach and the promotion of thriving agribusinesses.”

Going into developing regions of the world such as India or Africa and “transforming” their agricultural practices with frakenseeds will only drive them into gripping debt and disease from their toxic crops.

Obama’s buddy at the FDA

The July 2009 appointment of Taylor as a food safety adviser for the FDA is a slap in the face to the American people. This is a blatant conflict of interest to employ a former executive of one of the most reprehensible companies responsible for illness, refuse and the breakdown of a cornerstone of American culture — agriculture.

It’s no surprise that there’s been an upsurge in peoples’ unrest with Taylor’s position. The ardent response to the signon.org  petition is a litmus test to the collective turbulence. It’s obvious: Don’t put people like Taylor in a position of power, who’s integrity and values are (in theory) diametrically opposed to the FDA, an organization designed to protect the public. Now that’s a concept!

Obama’s choice to let in a fox in the hen house is just another affirmation of where loyalties lie. The best interest of the people? What’s that again? Social responsibility? That’s cute.

Perhaps, it’s a boon to both Monsanto and the FDA. Lull the public into a false sense of security, appoint a good ol’ boy and just like that; no more pesky regulatory policies holding Monsanto back. It’s a win-win.