Men’s volleyball: CSUN passing not at its best 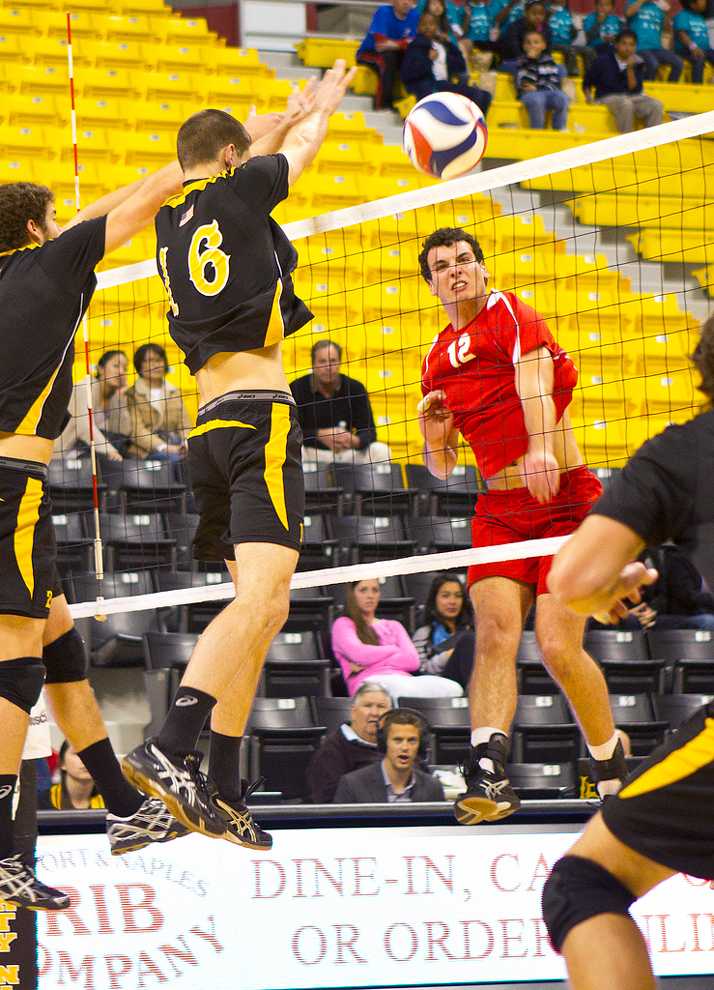 Opposite Julius Höefer (12), who had seven kills against Long Beach State Friday, has been one of the most consistent Matadors during 2012. Photo Credit: Kat Russell / Senior Photographer

The Matadors’ play on the hardwood as of late has been less than desirable for head coach Jeff Campbell and the rest of his staff.

A week after dominating most of a five-set non-conference win against Cal Baptist at the Matadome, CSUN’s defense committed 10 receiving errors en route to a straight-sets loss to conference foe Long Beach State Friday night.

“The week before, in practice, we did a little more playing instead of getting a lot more reps,” said freshman libero Sina Aghassy. “I think this week we need to focus more on getting some reps and being a little more confident in our passing.”

After putting on an offensive clinic against the Lancers, a game in which the Matadors hit .500 on 102 attacks, CSUN’s offense combined to hit for a horrid .182 on 66 swings against the 49ers.

“Our passing was definitely one of the biggest reasons we weren’t hitting well,” said senior outside hitter Matt Stork. “The first match we played them, we passed real well … (Long Beach) was serving right at us and we didn’t have a lot of chances to get our serves on.”

The road loss by the Matadors on Friday was just the latest misstep by a team that has seen their fair share of struggles away from home this season.

CSUN has lost all four of its road games so far this year and has only managed to win a single set in the road losses. Out of the next 14 games for the Matadors, 11 of them will be in the friendly confines of the Matadome. CSUN is 2-0 at home. Both games were won in five sets.

With this crucial stretch on the Matadors’ schedule, the advantage of getting to play in front of their school’s crowd can’t hurt the young squad’s chances.

“We’re a lot better at home than we are on the road,” Campbell said. “Most of our starters against Long Beach State had never even been to that building … Being in a facility for a long period of time, like the Matadome, that’s a big advantage for us and a big disadvantage for anyone coming in.”

The Matadors return to action Friday on the first day of a set of back-to-back conference matchups. The rival of turn that day will be the Pacific Tigers (3-7, 1-4 MPSF).

Following a win against  UC Santa Barbara on Jan. 20, the Tigers have lost five consecutive games, including three conference matches.

Stanford (7-2, 4-1) comes into Saturday’s matchup against CSUN ranked second in the MPSF. The Cardinal are coming off a weekend in which they beat the No. 1 team in the nation, BYU, in back-to-back days.

“It’s two matches, but right now our only concern is our game against Pacific,” Campbell said. “We have not talked about Stanford, we’re not going to talk about Stanford. We just need to win on Friday night, so all of our practice is going to be going towards beating Pacific.”