Matadors rally to remain undefeated at home against Pacific 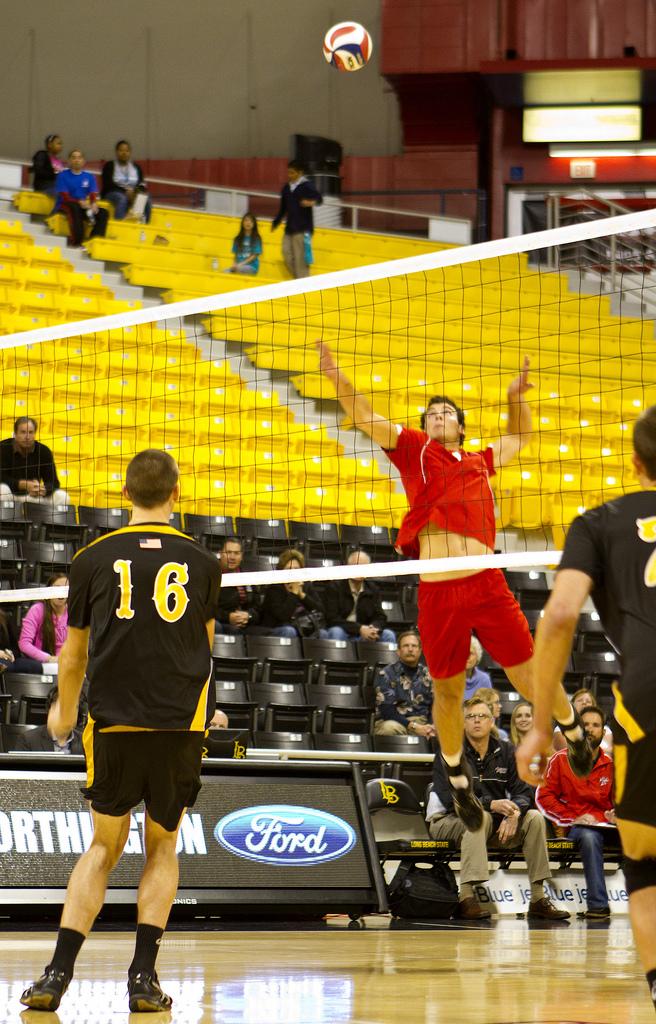 The electricity at the Matadome along with three players earning double-digit numbers in kills was just what the Matadors needed in their five-set win against conference rivals Pacific.

“(The home crowd) played a big roll,” CSUN outside hitter Brandon Lebrock said. “We probably wouldn’t have won if we didn’t have the crowd there. We didn’t give up and we didn’t stop fighting and that’s what really got us the win.”

“I don’t care if we get the win in less sets,” CSUN head coach Jeff Campbell said. “What matters most is that we win…Our guys played very hard and it was great for them to come out on top after game five.”

Freshman opposite Julius Hoefer had his usual night of 15 kills on .226 hitting, but timely offense by both sophomore outside hitters Lebrock and Cory Wagner gave the Matadors the edge.

Wagner put on an offensive clinic in the fourth set tallying seven kills while Lebrock energized CSUN throughout the night with 13 kills on .269 hitting.

“I was getting lots of one-on-ones because our middles were catching their middles,” Wagner said. “I was feeling all this adrenaline and I put all this trust in my team that if I did get blocked, my team would have been there to cover me.”

The Matadors opened up the first set and quickly learned why the Tigers’ defense has earned them the second highest number of blocks in the Mountain Pacific Sports Federation.

Pacific’s opposite Sean Daley continued his dominant net play as of late and stuffed the Matadors’ attack on the first point for the first of eight team blocks in the set.

CSUN fell behind early and put itself in the 8-4 hole forcing the early timeout.

“Pacific played great in that first set,” Campbell said. “Until about the first 20 points, they were unstoppable. We bounced back and definitely played better after that point.”

The Matadors found themselves down by as much as eight before trying to mount the comeback late in the set. The Tigers’ foiled any comeback attempt and took the set, 25-21.

The .091 hitting percentage of the Matadors was enough to keep them from the comeback but the improved play of CSUN in the later half of the set carried on to the next game.

The second set started off much better for the Matadors as an early 3-0 lead was enough to force the Tigers into taking the early timeout.

Northridge outside hitter Matt Stork and Hoefer each added three kills in the set while Lebrock added two of his own.

A pair of early kills by Hoefer and a dominant presence on the net by junior middle blocker Drew Staker helped extend the lead. CSUN managed to push its advantage to 12-3 after a Stork block before the Tigers began to make a push of their own.

Pacific’s defense found its way back on the net and slowly chipped away at the Matador lead before evening up the second set at 15 apiece.

Junior opposite John Baker came in to the match and made an instant impact with a pair of aces before a Moore kill put the Matadors up 21-17.

With the Matadors up 24-20 the final point provided an electric rally that included a diving save by Lebrock and a botched pass by the Tigers’ Patrick Tunnel leading to the Matadors taking set two 25-20.

The Matadors hit for a worse percentage in the second set but Tigers’ -.087 hitting and three receiving errors gave CSUN the edge.

Both the Matadors and Tigers exchanged points early in the third set but the presence of Staker on the net kept CSUN close throughout.

Baker and redshirt sophomore Marty Lorenz saw playing time early but Hoefer and Moore re-entered late in the set with the Matadors still down 18-15.

Two service errors by CSUN in the closing points of the third gave the Tigers the set 25-21.

The fourth provided another back-and-forth match but this time CSUN held the lead throughout. Outside hitter Cory Wagner sparked the rest of the offense, which hit .640 in the set, with his seven kills. Lebrock also added three more kills in the set.

“I was just swinging for the court tonight,” Lebrock said. “More importantly I got more attempts this game than I have in the other games I’ve played so it got me more engaged.”

Another Hoefer spike ended the fourth, 25-18, and pushed the match into a decisive fifth set.

The Matadors again exchanged points with the Tigers until sophomore setter Filip Tomicic and his serves extended the lead before Hoefer came up with a clutch block forcing the Tigers’ timeout with the score at 9-5.

After allowing the Tigers to take the lead at 13-12, Hoefer came up with another kill before a defensive block by CSUN gave it the 14-13 advantage.

A Staker block finished the match and sealed the Matador victory at 3-2.