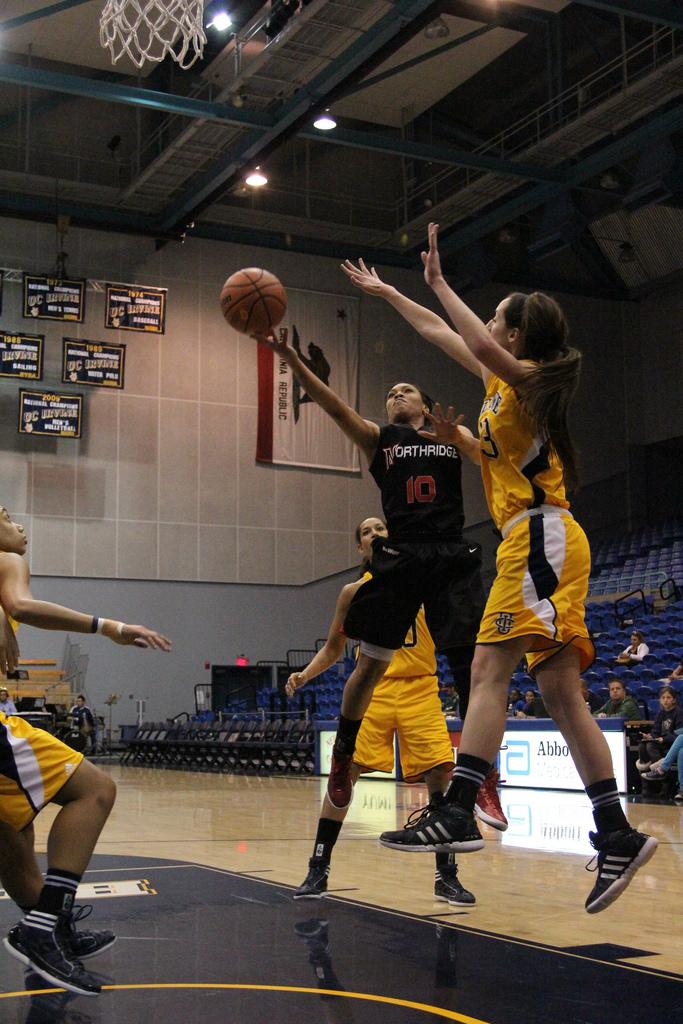 It was the 49ers’ big offensive push at the beginning of the second overtime period that hindered the Matadors’ chances of coming back. Three layups, two by LBSU guard Chantel Dooley and one by guard Alex Sanchez, put CSUN in back 67-61 within the first three minutes of play.

“The reality of it is that they shot 55 percent in both overtimes and that’s just terrible defense,” Northridge head coach Jason Flowers said. “Anytime, as a team in crunch time, you’re giving up layups, you don’t deserve to win. We didn’t deserve to win. (Long Beach) made plays and they got things done.”

The rebounding battle between the two teams was about even, with CSUN edging out LBSU by one (40-39), but the 49ers collected 20 offensive boards to keep giving themselves a second look at the basket.

“Anytime you give up 20 offensive rebounds, there’s a problem, especially against a team that usually gets outrebounded,” Flowers said. “I thought they did a better job at pursuing the basketball and they made plays.”

Matador guard Janae Sharpe, who helped cut the team’s first half deficit (32-31) with a 3-pointer and making a free throw, thought the team went through a defensive breakdown in the second overtime period.

“We weren’t boxing out. We weren’t talking on defense,” said Sharpe, who finished with 17 points. “That kind of messed us up for getting offensive boards and defensive boards.”

Being aware of the 49ers’ 3-point abilities, the Matadors did a good job contesting those shots from behind the arc, making LSBU shoot 39.1 percent from long range.

“(Long Beach) was six of 10 from three in the first half. I thought we did a better after that,” Flowers said. “Part of that was they got some things in transition and in scattered court. We made the adjustments, but we knew they were going to shoot threes.”

CSUN center Jasmine Erving, who came off a career-high 36 points, continued her dominant play with 20 points and 10 rebounds, but her double-double wasn’t enough for the win. The senior noticed the amount of turnovers the team had and was not pleased with what she saw.

“It was rough. They pressed us for almost the whole game,” Erving said. “We just struggled trying to bring the ball up and that’s one thing we need to work on.”

It wasn’t the first half Flowers was hoping for. After having relatively good games in the turnover department, CSUN slipped into its old habits and had 15 turnovers (22 overall). The 49ers capitalized on those Matador turnovers by scoring 24 points.

Erving had a quiet half, scoring only five points and only one rebound. Forward Camille Mahlknecht did most of the work for CSUN making four of her five shots and finished with 11 points, four assists and three blocks.