Men’s volleyball: No. 4 Cardinal outduel Matadors down the stretch 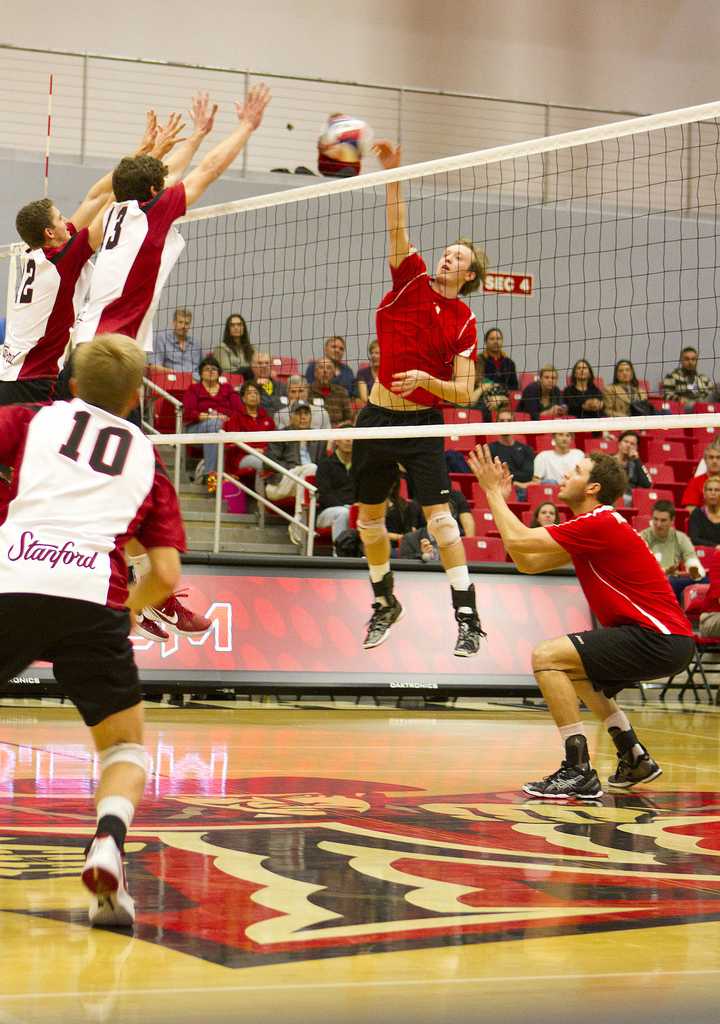 It’s not exactly a secret that the Matadors have been a completely different team this season when playing at home in contrast to when playing on the road. Heading into Saturday’s matchup against No. 4 Stanford, CSUN was 3-0 at the Matadome, 1-6 anywhere else.

That standard of home vigor remained as true as ever against the Cardinal, specially during an inspiring second set. CSUN dominated Stanford then en route to an astounding 25-18 win.

“Everything was working,” CSUN senior outside hitter Matt Stork said of the set that tied the match at 1-1. “Passing, hitting, setting, blocking, serving. Everything was going our way.”

“We tried as hard as we could,” CSUN head coach Jeff Campbell said. “We gave it our best effort out there, but tonight Stanford was definitely the better team.”

While CSUN hit at a better clip overall (.282 compared to Stanford’s .275), it was the Cardinal who came through with the crucial points when they needed it.

Following the Matadors’ dominant frame that evened things up, the teams found themselves in a tight third set that saw them trade points all the way into the latter stages of the game. A service error from Stanford outside hitter Brad Lawson had CSUN within 23-22.

Northridge couldn’t come up clutch, though. A kill from Lawson and another one from his comrade, Brian Cook, finished off the Matadors in the set as Stanford took a 2-1 lead.

“It was really close all the time,” CSUN freshman Julius Hoefer said.

It certainly didn’t help the Matadors’ cause to win the crunch-time battle that Cook and Lawson were on the other side of the net. The outside hitters were on point throughout the night and combined to put down 45 of the Cardinal’s 56 total kills.

“They played great,” Campbell said. “We couldn’t stop them.”

Said Stork: “We definitely tried to at least get a two-man block on them. Cook basically had one person up every time.”

The Matadors counterattacked with Stork (11 kills), Hoefer (12 kills) and middle blocker Jared Moore’s team-high 13 kills. But there was little to be done against Cook and Lawson’s combined 15 kills in the third.

It was more of the same in the fourth. Even as CSUN hit .407, Stanford outdueled it. Led by their star duo’s combined 12 kills in the frame, the Cardinal hit .519 and downed the Matadors 25-19 to take the game.

“We’re just not stopping or affecting the other team,” Campbell said. “That’s an area we have to get better at and we will get better at.”

There were some positives for the Matadors to look at. Besides out-hitting them, CSUN also out-blocked the Cardinal 18.0-8.0. Northridge also committed less attack errors (15) than Stanford (26).

“We definitely are getting better,” Campbell said. “It wasn’t good enough tonight, but hopefully the next time we play these guys, it’ll be good enough.”