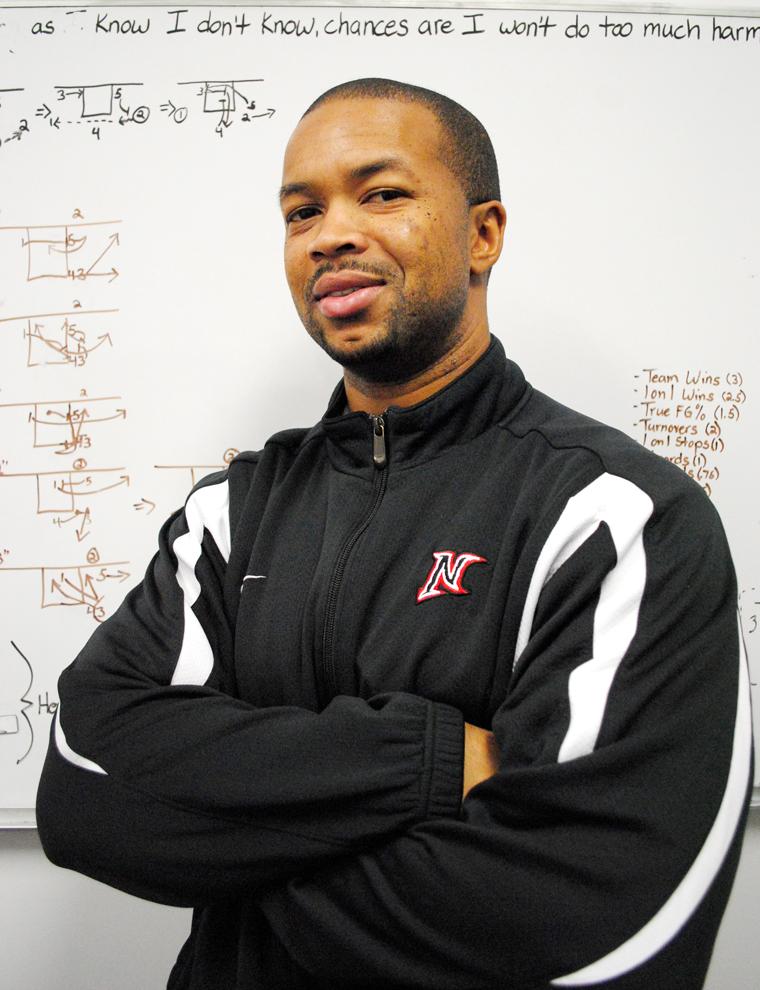 Jason Flowers poses during a November photo shoot. Flowers says his coaching style is “upfront and blunt” and credits his wife Tairia for having a “better poker face.” Sundial File Photo

A month into his head-coaching tenure with the CSUN women’s basketball program, Jason Flowers received some news that made him feel like he was in a movie.

His wife, Tairia Flowers, had just been named the head coach of the CSUN softball team.

“When it went down,” Jason said of the summer of 2010, when both he and Tairia became Matadors. “I used to tell people that Disney couldn’t have written a better script.”

It certainly was a magical 2010 for the Flowers. The couple, who have been together since 2001, welcomed their son Jayce into the world earlier that year. The opportunity to work in the same building, and as the top directors of each of their programs ­– no less – was a unique situation.

“It’s a situation where it makes life a lot easier,” said Jason, who prior to becoming CSUN’s head coach was an assistant at UC Riverside.

While the thought of sharing the work place with a significant other might make some people’s hair stand on end, that’s clearly not the case for the Flowers. The mom-and-dad-at-the-same-place situation allows them to spend more time with their son. He occasionally attends their teams’ practices.

Also, as head coaches of Division-I programs, the Flowers are busy people. Odds are you won’t catch them taking romantic strolls on campus in the middle of the day.

“Once we’re on campus, we don’t see each other a whole lot.” said Tairia, a former NCAA champion with UCLA who was an assistant coach at Long Beach State from 2007-10.

Both Jason and Tairia agreed that a key ingredient to make it all function smoothly is separating their work and home lives.

Aside from their nightly coaching venting during their 10-15 minute drive home, the Flowers try to leave the coaching business at CSUN.

“Once we get home, it’s dinner, it’s play with our son, it’s get ready for practice plans for the next day.” Tairia said. “We do a good job of not bringing the stress of the job home with us.”

Jason Flowers: “She’s a saint having to deal with me”

Prior to Jason’s arrival at CSUN, the women’s basketball program was mostly an object of banter around campus due to its four-wins-per-season average.

While the Matadors continued to struggle during Jason’s rookie campaign, he’s managed to have a complete turnaround during 2011-12. CSUN, which only won 13 games from 2007-10, is 14-10 and in first place in the Big West Conference this season.

“It’s just amazing. It’s a testament to how hard he works and how much pride he takes in his coaching,” Tairia said. “He’s meant to coach. He’s shown the girls they can win.”

It’s true. The Matadors are legit. But at a cost. Jason’s winning coaching style is a bit, per se, “blunt.”

Tairia, whose softball squad recorded four wins over NCAA Tournament-participating teams last season, is different in that sense. Unlike Jason, she doesn’t “wear emotions on her sleeve.”

“They say opposites attract,” Jason said. “I think if she was anything like me, uh, it’d be a lot of problems in the house.
“She’s a saint having to deal with me.”

People usually don’t choose the person they want to form a family with out of the goodness of their hearts, though. Tairia, whom Flowers called a “genuinely good person,” saw something in Jason that made her want to take the big step into a life together.

It was Jason’s “confidence.”

“He just has non-stop confidence,” Tairia said. “The way he carries himself, the way he talks. In the department he’s been known for being a little bit of a smack talker, but at the same time he backs it up.”

It wasn’t confidence at first sight, though. The couple spent a year as friends while attending UCLA as student athletes before starting to date in the summer of 2001.

Their coaching careers took them all over Southern California. Tairia started at UC Riverside in 2006 while Jason was at Long Beach State. Then Tairia went to Long Beach just as Jason accepted a job offer from the Highlanders.

Now they’re both at CSUN. Tairia is still trying to build a winner while Jason seems to have already gotten there.

Almost everything is as perfect as can be. There’s just one small detail that bugs Tairia.

“I like to watch all his games, and I want to be as supportive as possible,” Tairia said. “Our seasons are starting to overlap. The (Big West) Tournament is coming up and I’m not going to be around as much because I have my own things going on.

“To me, that’s the only downfall: I can’t be there in the stands every time and watching every one of (Jason’s) successes.”

It’s no wonder Jason’s made winners out of these Matadors. He’s a winner. No bigger proof than the woman watching him from the stands every time she can.

“She’s a really good person. That was evident from the beginning,” Jason said.