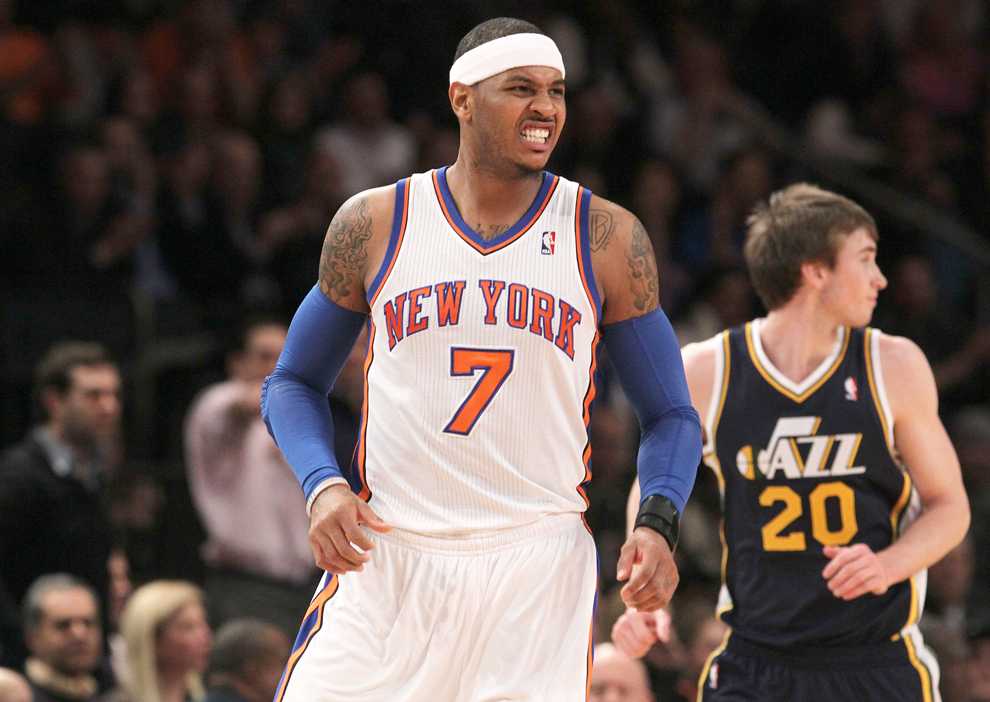 Carmelo Anthony grimaces after suffering an injury during a Feb. 6 game against the Jazz. Anthony’s injury gave previously-unknown guard Jeremy Lin a chance to run the show in New York. Lin’s had huge success so far. Photo courtesy of MCT

With the emergence of Harvard University’s Jeremy Lin, the New York Knicks have a problem: Is the team big enough for three stars? Because it’s already not big enough for two.

While appealing on paper because it allowed Melo and fellow All-Star forward Amar’e Stoudemire to pair up, the trade backfired as both stars proved they can’t co-exist on the floor.

Compared to last year, both players are struggling. Anthony is averaging 22.3 points per game on sub-40 percent shooting while Stoudemire is putting up just 18.2 points per game on a measly 44.7 shooting – about seven points and six percent less than last season.

The lack of production led the Knicks to a dismal 8-15 record through the first 23 games of the season.

Since Lin began getting 35 minutes per game – starting on Feb. 4 against New Jersey – the Knicks have been on a six-game winning streak. Lin’s numbers are through the roof. He’s been averaging 26.8 points on 51 percent shooting while finding his teammates eight times per game.

Currently, both Anthony and Stoudemire are missing games due to injuries and personal reasons, but when they return, look for the Knicks to go back to their losing ways – and it’s going to be Anthony’s fault.

To put it simply, Carmelo is a ballhog who can’t work together with other good players, and he’s proven it throughout his career. He constantly demands the ball in his hands. He drove Allen Iverson out of Denver, he currently takes all of Stoudemire’s field goal attempts, so what’s to stop him from doing the same to Lin?

Ever since New York punted their starting-caliber point guard (Felton, was feeding Amar’e well by averaging almost nine assists per game) in favor of Anthony’s prime-scoring services, the Knicks have been on a downward spiral as Stoudemire’s numbers have been dwindling.

Anthony has been shooting 19 shots per game, compared to Stoudemire’s 15, and he’s been unable to make the most of his field goal attempts. Worse, Melo is an unwilling passer – he rarely plays pick-and-roll ball, which is where Stoudemire thrives.

Lin, who’s shown he’s a serviceable passer, won’t be able to feed Stoudemire because the ball won’t be in his hands. Melo’s one-on-one style of isolation ball will break down any kind of established flow they had under Lin’s leadership, even if Anthony has already publicly stated that when he returns, the offense would run through Lin.

According to ESPN, Lin and Melo rank fourth and fifth respectively in possessions per 40 minutes, and with Anthony’s history of shot-chucking (shoots nearly 20 shots per game for his career), it’s hard to believe he’d be open to sharing possessions with an undrafted player.

The most disturbing aspect of all this is that Knicks fans won’t be able to turn to leadership to stop this. Head coach Mike D’Antoni is an enabler – he resurrected the run-and-gun style of offense when he coached for Phoenix, and he gives any player the green light to shoot at will.

Lin has proven he can be the go-to guy both scoring and passing-wise. He’s led the Knicks to their biggest winning streak of the season, including a victory against the Lakers when both Carmelo and Amar’e were out (he scored a career-high 38 points on 57 percent shooting), and he shows no signs of slowing down. He hit a game-winner with less than a second to go against Toronto Tuesday night.

The only thing in his way is Carmelo and his demand for the ball.