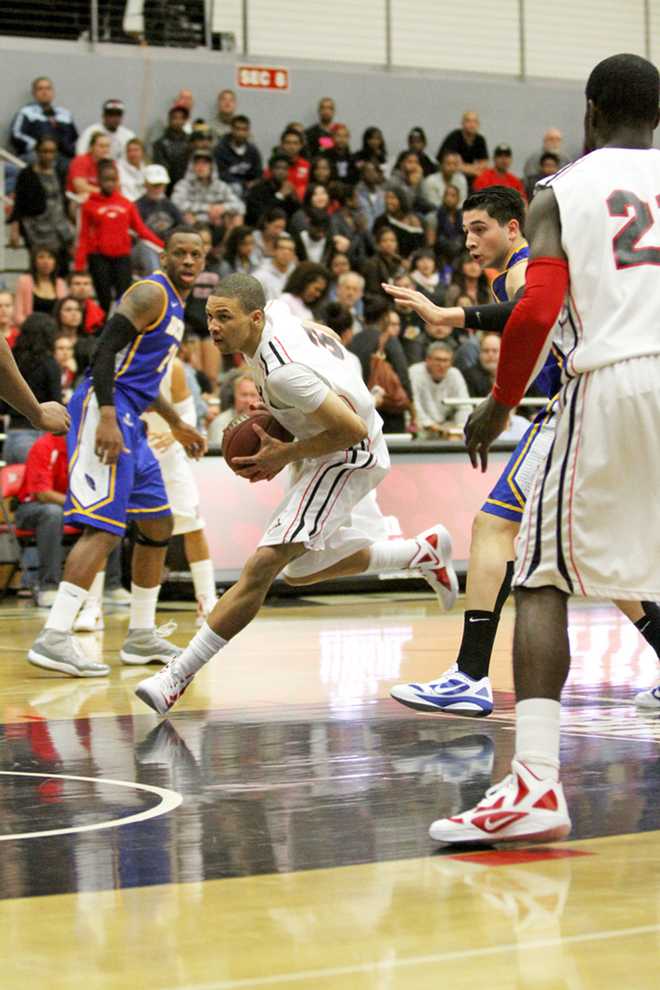 Guard Stephan Hicks drives to the basket during a game against UC Santa Barbara on Feb. 2. Tonight, the Matadors host Cal Poly, a team that beat them by 46 points earlier this season. Photo credit: Tessie Navarro / Multimedia Editor

Josh Greene didn’t choose the forget-and move-on route after Cal Poly crushed his Matadors by 46 points in a televised game last month. Instead, the sophomore guard took the embarrassing loss as a sign of disrespect.

“When we come out to play (Cal Poly), it’s personal, especially for me,” Greene said. “To be honest, I felt disrespected.”

“Hopefully we take this game personal and we come out and do to them what they did to us.”

Greene and the Matadors will get their chance for payback tonight when they host the Mustangs at the Matadome in Big West Conference play.

CSUN, which has lost seven of its last eight games, returns home after a letdown game against last-place UC Davis Thursday and a heartbreaking loss at Pacific Saturday.

The Matadors, who are banned from postseason play, are no longer in contention for the Big West regular-season championship. However, they can play the role of spoiler versus the Mustangs (15-11, 6-6 Big West), as Cal Poly is in a battle for the fourth seed in next month’s league tournament.

The ailing Matadors (6-17, 2-10) have had a disappointing season to say the least and leading scorer Stephan Hicks said effort and inconsistency is a big reason why.

“What’s going on wrong is the lack of energy towards the end of games,” said Hicks, who averages 16 points per game. “Like at Pacific, there was a key box-out that cost us the game. We play good one day and come out flat the next. We need to keep up that energy level throughout the game.”

Greene, who has scored 19 points or more in the last three games, said the constant losing has taking a toll on the team.

“We have our days where we get upset at each other and we tend to argue with each other, but that’s a team, that’s what happens,” he said. “We’re a family. Families argue.”

The Matadors will try to take out all of their frustration on Cal Poly, a team they have beaten four times in a row at the Matadome. However, even with its recent success at home over the Mustangs, CSUN isn’t going to take them lightly after losing 100-54 at Mott Gym Jan. 21.

Cal Poly went a scorching 15-of-21 from three-point range against Northridge. The Mustangs knocked down their first 11 3-pointers, which tied an NCAA record.
“Everything they threw up was going in, but we need to come out strong and we can’t let that happen again,” Hicks said.

Cal Poly is on a two-game winning streak and holds a 46-41 all-time series advantage over CSUN.

After a tough four-game stretch in January where the CSUN captain didn’t score in double-figures, Greene now has scored 10 points or more in the last six games.
It’s been an up and down sophomore year for Greene, but he said he’s learned to play at his pace.

“In the beginning, I knew I had to pick up a lot of the load from (last year’s seniors) Rashaun (McLemore) and Lenny (Daniel) and be the leader on this team, both offensively and defensively,” Greene said. “That made me rush and hurry up everything instead of letting the game come to me. Now during (Big West) league, I started being patient and getting others involved first.”