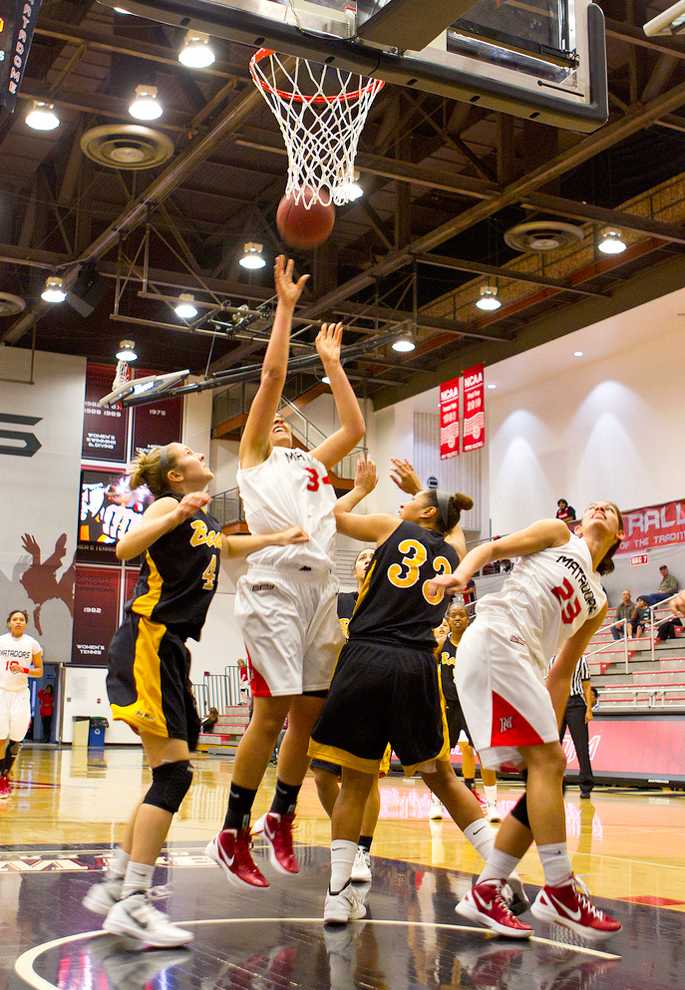 Center Jasmine Erving (34) goes for a layup in a game against LBSU Saturday . Tonight, Erving looks to do more of the same against Pacific. Photo Credit: Michael Cheng / Daily Sundial

As the Big West Conference comes to an end, the Matadors find themselves in a good position. With a league record of 8-3, CSUN (14-10) is by itself in first, but there’s no relaxing for this team.

“We can’t be comfortable because we need to come out hard every single time,” guard Ashlee Guay said.

But with only five games left, every match becomes more important than the next. With Pacific (14-9, 7-4) coming to the Matadome Thursday night with a four-game winning streak, each game isn’t going to be easy.

“It doesn’t matter if we’re at the top or the bottom,” Guay said. “Every game, we have to come out the same way we go into practice, working as hard as possible.”

In its first meeting, Northridge found a way to come back from a 13-point deficit despite a horrible shooting display in the first half at Stockton on Jan. 14 while Pacific provided problems for the team.

“Every team challenges you in different ways,” head coach Jason Flowers said. “At the end of the day it comes down to how well we do what we’re supposed to do, how well we execute on both ends of the floor. So with them, they’re a team that likes to spread the floor. They like to penetrate and play off penetrations.”

The Matadors came together defensively in the second period to rally back against the Tigers, but the team didn’t show that same defensive effort in their last game against Long Beach State. Despite shooting 44.8 percent from the field and collecting 40 rebounds, Northridge’s defensive slip in the second overtime period cost the team the victory.

“We just got to keep our man in front of them and know what they can do and can’t do,” guard Janae Sharpe said about what the team needs to do against Pacific.

“If they can shoot, don’t give them room to shoot. And if they drive, trap them so they can’t get past us.”

Though their defensive efforts may have slipped for one game, one player that has been consistent for the Matadors is center Jasmine Erving. She’s been a double-double machine, averaging 26 points and 10 rebounds in the last three games.

“I think we are versatile enough to where we can have a presence in the paint in a couple of different ways,” Flowers said. “Obviously the easy way is to just throw it into the low post, and with how Jasmine has played in her last five games, it has made it easier for everybody else.”