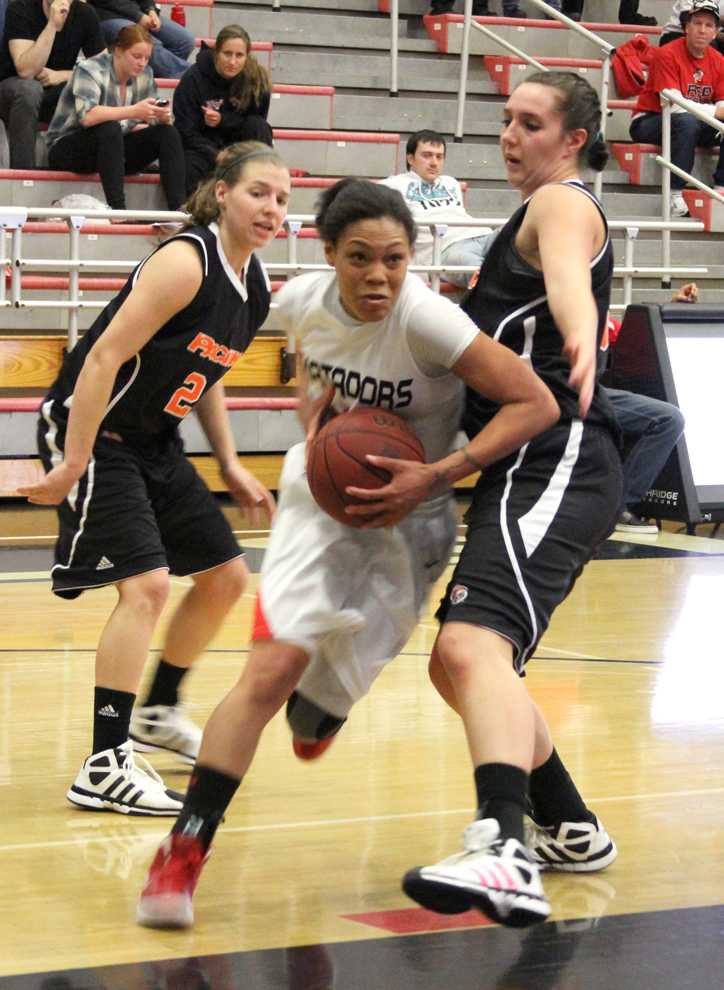 Matador guard Janae Sharpe drives into the paint looking for a layup in their game against Pacific Thursday night. Sharpe led her team to a

The last time these two teams played, CSUN trailed Pacific by 13 points, but the Matadors made a push to come back and win the game.

CSUN bounced back a Big West Conference loss to Long Beach State, with guard Janae Sharpe leading the way with 19 points, four rebounds and three assists. But the freshman didn’t have a great first half.

“He (head coach Jason Flowers) said I was 0-for-7, so I had to change that,” said Sharpe, explaining what her coach told her during halftime. “So I went out in the second half attacking and trying to make plays.”

Sharpe did come out attacking, making six baskets, two of which were from behind the arc. She also got to charity stripe, making all five of her attempts.

“The biggest thing for her is her always being in attack mode and not deferring and not being hesitant,” CSUN head coach Jason Flowers said. “I kind of figured that she was ready to go in the second half when I yelled at her for something on the floor and she kind of waved me off. I figured that she had things under control and was ready to go.”

“(Erving’s performance) was really big. Getting boards and getting a double-double,” Sharpe said. “She helped us out a lot with rebound and scoring and being a post presence.”

The Matadors had another big post presence, with players other than Erving making points in the paint. Forward Camille Mahlknecht had a solid first half, shooting 100 percent (3-of-3) from the field and tallied three rebounds and a block.

But forward Jessica Duarte, who is usually known for being a perimeter player, made a surprise appearance in the paint in the second half, with all three of her baskets coming from the paint.

“She’s extremely versatile,” Flowers said. “I think she’s a difficult matchup when she’s focused in understanding who’s guarding her and who’s on the floor for us. It’s a situation where obviously she can shoot the basketball and she’s shown that. She’s also shown that she can post up against players her size or smaller, and even sometimes bigger.”

It was a sloppy finish to the first half for the Matadors. They ended the half with 16 turnovers that led to 10 points for the Tigers.

But other than the turnovers, CSUN did well defensively against Pacific. The Matadors held the Tigers to 31 percent shooting from the field, but three 3-pointers kept Pacific within striking distance. Pacific finished the game 9-of-30 from behind the arc.

The Matadors will play one more game at the Matadome against UC Davis Saturday afternoon before head off for a two-game road trip next week.