Women’s basketball: Matadors rally from 15 points to win against Davis 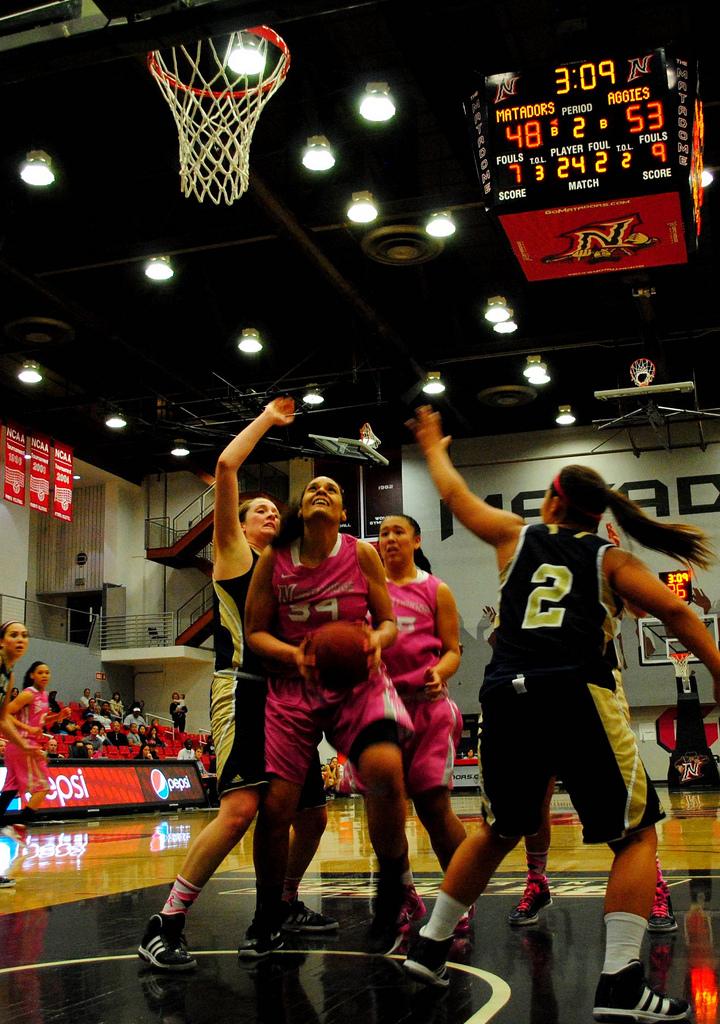 Matador center Jasmine Erving goes for a layup during their game against UC Davis. Erving and the Matadors rallied back from 15 points to get the 63-60 win Saturday afternoon at the Matadome. Photo Credit: Andres Aguila / Senior Photographer

It started with exactly 10 minutes left in the second half with the Matadors down 45-32. Center Jasmine Erving had just made a jumper. Forward Violet Alama got a layup 29 seconds later.

And then they came out like pink bats out of hell.

“At times as a coach, you want to be able to explain everything. And I think, to a certain level, we get paid to explain certain things,” CSUN head coach Jason Flowers said. “The only way I can explain this certain group and what they’ve continued to do throughout the season and in close games is just a testament of their character.”

Flowers continued to say that it was his effort by his team in the second half that gave them the win that afternoon.

“The kids get all the credit,” he said. “I wish I could say that I drew up a magic play or invented a brand new defense that had never been seen before. But it’s not. It was our kids.”

Erving continued to be a factor for the team, contributing 24 points and four rebounds. But Alama and Jessica Duarte came up big, coming up with clutch shots and hustle plays.

Alama had a solid outing with nine points, seven rebounds and four steals. Her 3-pointer was the catalyst that sparked the Matadors on both ends of the court.

“It was the difference of the game,” Flowers said. “It’s been interesting from the standpoint of how she shoots the ball from the perimeter, and we want her to shoot the ball well from the perimeter. But for whatever reason, she’s hesitant or she tries to do more than is presented. She caught the ball in rhythm and she knocked down the shot. She does that all the time in practice.”

Duarte was another catalyst in the last 10 minutes of the game, making the game-tying jumper and a fastbreak layup to give CSUN the lead, one the team had not seen since the 19:23 mark of the first half.

“Heart, and we want to get to the Big West Tournament and be the best,” said Duarte, explaining why the team made its big surge. “We have a good chance at finishing No. 1 and that’s what we want. That’s what we’re fighting for everyday.”

Prior to their second-half push, the Matadors struggled to get baskets, only shooting 33.3 percent going into halftime. It was UC Davis’s 2-3 zone trap defense that forced CSUN to commit 18 turnovers in the game. But Northridge figured out a way to score against it in the second half.

“They use a 2-3 trap and we worked on this all week during practice,” Erving said. “Our main goal was to get the ball inside, and I think our posts did a great job finishing inside as well as our guards attacking.”

The Matadors had a decent first half, but it didn’t end the way they wanted it to. CSUN had the ball with 26.8 seconds left and ran a play to free up Duarte at the baseline, but UC Davis forward Lauren Juric blocked her shot. The Aggies got the ball back and guard Blair Shinoda nailed a 3-pointer at the buzzer to push her team’s lead to 29-23 going into halftime.

Erving did the majority of the scoring for Northridge in the first half. She finished with 15 points.