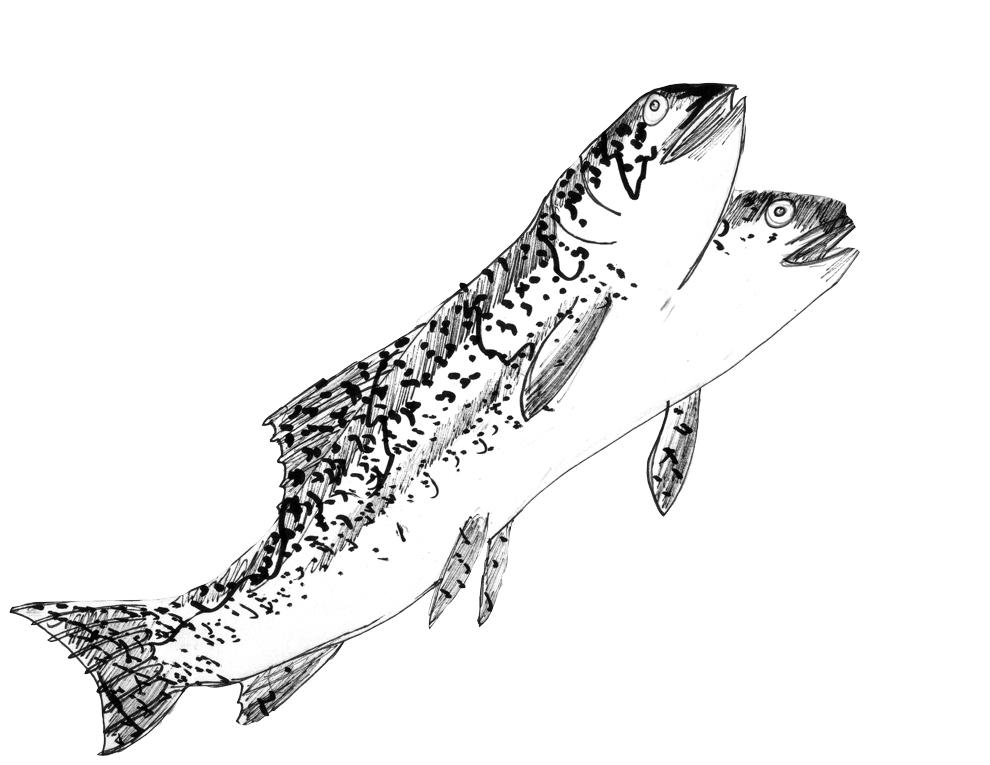 AquaBounty Technologies, a biotechnology company, developed the first engineered animal meant for consumption. After 15 years, it is waiting for approval of AquAdvantage, an Atlantic salmon that is modified with genes from the Pacific Chinook salmon and an ocean pout, an eel-like fish. The genetic manipulation allows the fish to eat year-round, rather than only seasonally and helps it to reach maturity in a matter of 16 to 18 months instead of the usual maturity rate of three years.

“Currently, the U.S. imports 95 percent of the Atlantic salmon consumed,” according to AquaBounty. “Approval of AquAdvantage could signal America’s leadership in this technology, enabling production of the Atlantic salmon in the United States, reducing our dependence on foreign imports and providing much needed food security and economic benefits.”

A petition headed by consumer watchdog groups, Food and Water Watch, Consumers Union and the Center for Food Safety protests the review process the FDA is using to evaluate the salmon.

The International Business Times reports modified salmon is currently classified as a “new animal drug.” The petition requests the fish to be classified as a “food additive,” which would subject it to a much more rigorous review process.

There are a growing number of concerns by consumers and scientists alike, and there is plenty of discordance surrounding this new frontier of food science.

While a fish that’s bigger and matures more quickly could feed many more people, animals shouldn’t be genetically manipulated precisely because they are meant for consumption. There are countless unseen side effects to not just the human body, but to the ecosystem.

There also are no longitudinal studies that can postulate what the repercussions of consuming these fish poses.

AquaBounty’s own research showed that engineered salmon may contain increased levels of a hormone linked to breast, colon, prostate and lung cancer, according to Wenonah Hauter, executive director of Food & Water Watch.

The first crop of the genetically modifiied fish is located in a land tank in a land-locked area of Panama, and AquaBounty assures that there is no risk of breach.

But if the fish escape containment and contaminate the wild populations, they could eat the wild fish out of house and home, since they are designed to be year-round eaters, not to mention they’re twice the size of a regular wild salmon.

If the salmon farming industry approves this new product and the farming occurs in regions where there may not be as effective confinement protocol, the fish could escape and interact with wild Atlantic salmon.

What about countries that lack strict aquaculture and environmental regulations and might allow oversights in the containment of these creatures? Since AquaBounty is just the vendor of the eggs, not the farmers, how can there be tight enforcement? How can there be a guarantee they won’t wreck an ecosystem? Which other potentially vulnerable or endangered species could come under the mercy of these ravenous, scaly terrors?

Now, scientists say that the fish are designed to be sterile, so in the case of an accidental escape, they couldn’t breed with the wild population. There are always margins of error, however, and according to AquaBounty’s research up to 5 percent of these fish may be fertile.

“If fish escape, and they’re sterile, they don’t die out immediately. They still live in the ecosystem and interact with other organisms,” said Dr. Anne Kapuscinski, professor of sustainability science and chair of the Environmental Studies Program at Dartmouth College in an interview with NPR. “So, again, the question of scale becomes important. For this particular application, we were given really no information about the organisms in the river in the undisclosed place in Panama. So it’s really hard to know are there other fish in that ecosystem that any escapes could interact with?”

Food Safety News reports 11 senators wrote a letter to the FDA in September 2011 asking to stop the approval process of AquaBounty Technologies’ salmon.

“One of the most serious concerns regarding AquaBounty’s application is the FDA has no adequate process to review a (genetically engineered) animal intended as a human food product,” the Senators’ letter read. “FDA is considering this (genetically engineered) fish through its process for reviewing a new drug to be used by animals, not for creation of a new animal, especially one intended for human consumption. Clearly, this is inappropriate.”

There is also other legislation to try and prevent the approval of these GE fish.

“Notwithstanding any other provision of this section, a genetically engineered fish shall be deemed unsafe,” according to section 230 of the bill sponsored by Rep. Donald Young, R-Alaska.

There is debate on either side of the aisle stirring surrounding this kind of salmon. If passed, the fish will not be labeled as such in grocery stores and poses a threat to public health, the environment and local economies. Keep up with the developments and oppose engineered salmon.