Weekly Column: Taking one too many shots: OKC guard Westbrook should leave scoring duties to Durant 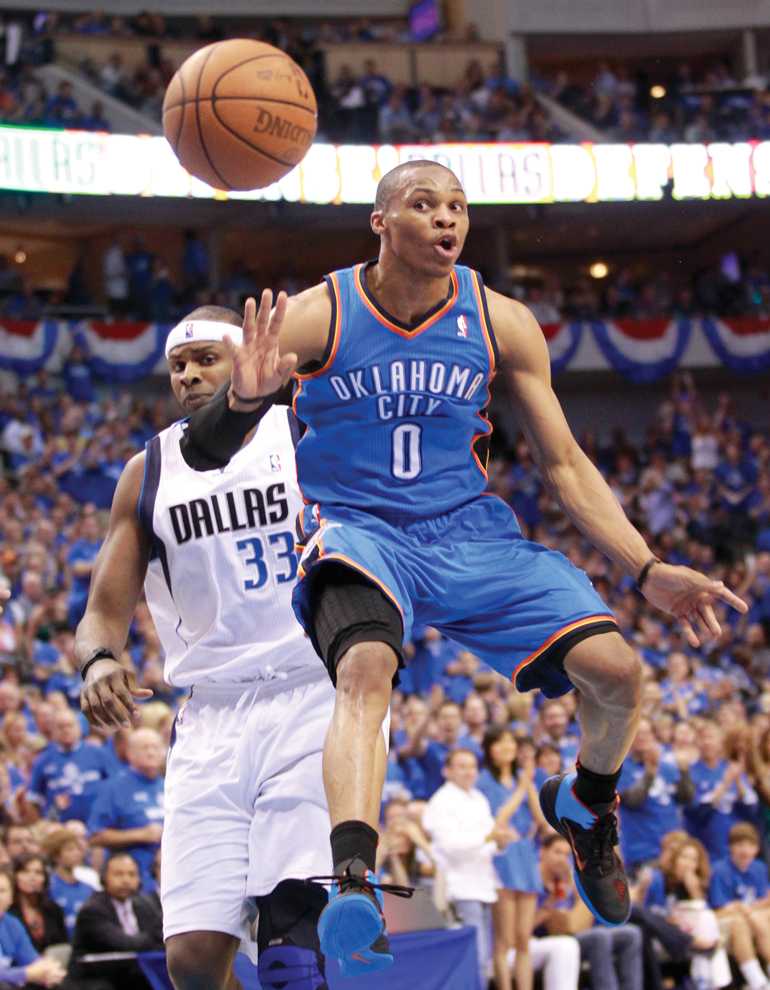 Thunder guard Russell Westbrook makes a pass during a 2011 playoff game against the Mavericks. Westbrook needs to do more of this. Courtesy of MCT

Coming off back-to-back victories against the Denver Nuggets and New Orleans Hornets in which the Oklahoma City Thunder’s one-two punch of Kevin Durant and Russell Westbrook combined for 91 and 62 points respectively, one thing was proven for sure: Westbrook shoots the ball too damn much.

Durant, who’s currently third in the league in scoring, averaging 27.7 points per game, scored the most in that two-game stretch, but didn’t take the most shots. Though Westbrook tallied an impressive 71 points in the two games, he took 49 shots compared to Durant’s 82 points on 47 field goal attempts.

This raises a question: should a point guard really be taking 19 shots per game for the season when he has a teammate who has won the scoring title two years in a row?

Absolutely not. Westbrook’s playing style doesn’t fit well with Durant’s, and even though the Thunder are leading the Western Conference right now, signs of dysfunction have been clear.

Firstly, Westbrook does little to get his teammates involved. Sure, he leads his team in assists with 5.5, but he’s getting nearly 35 minutes of playing time per game. The only point guard racking up fewer assists at the same rate is the Bucks’ Brandon Jennings.

A comparison of Westbrook’s and Durant’s shots per game reveals something astonishing: This season, Durant is shooting only 0.7 more shots per game than Westbrook, yet he is averaging over four points more. Currently, Westbrook is taking 18.8 shots, and for whatever reason, he insists on shooting the three-ball nearly three times per game even though he only makes under 30 percent of his attempts.

To put things simply: Westbrook is stealing shots away from Durant and he’s not making the most of them. Durant is shooting a blazing 51.2 percent while Westbrook, who is a career 42-percent shooter, is putting a pretty decent 47.4 – but that’s still no excuse to rob the best offensive player in the game of his shots while masquerading as the team’s starting floor general.

It’s quite clear what the Thunder have to do, either move Westbrook to the shooting guard position and find another player to run the point, or trade him straight up for a true passing point guard a la Rajon Rondo, whom the Celtics have been rumored to be trying to move.

Don’t get me wrong, Westbrook is a dynamic player who’s capable of taking over games, but the fact is Oklahoma City doesn’t need another 20-shots-per-game guy in its point guard slot. Between Durant and up-and-rising shooting guard James Harden and power forward Serge Ibaka, the Thunder have more than enough scoring power.

Westbrook’s playing style just throws chaos into the mix – as proven by last year’s playoff blunder against the Mavericks, where the Thunder lost in five games as Westbrook shot 36 percent for the series and this season’s mid-game scuffle between Durant and Westbrook that had them screaming at each other in frustration during a timeout.

Oklahoma City’s offensive chemistry is questionable, and until something is done about Westbrook, it will stay that way.