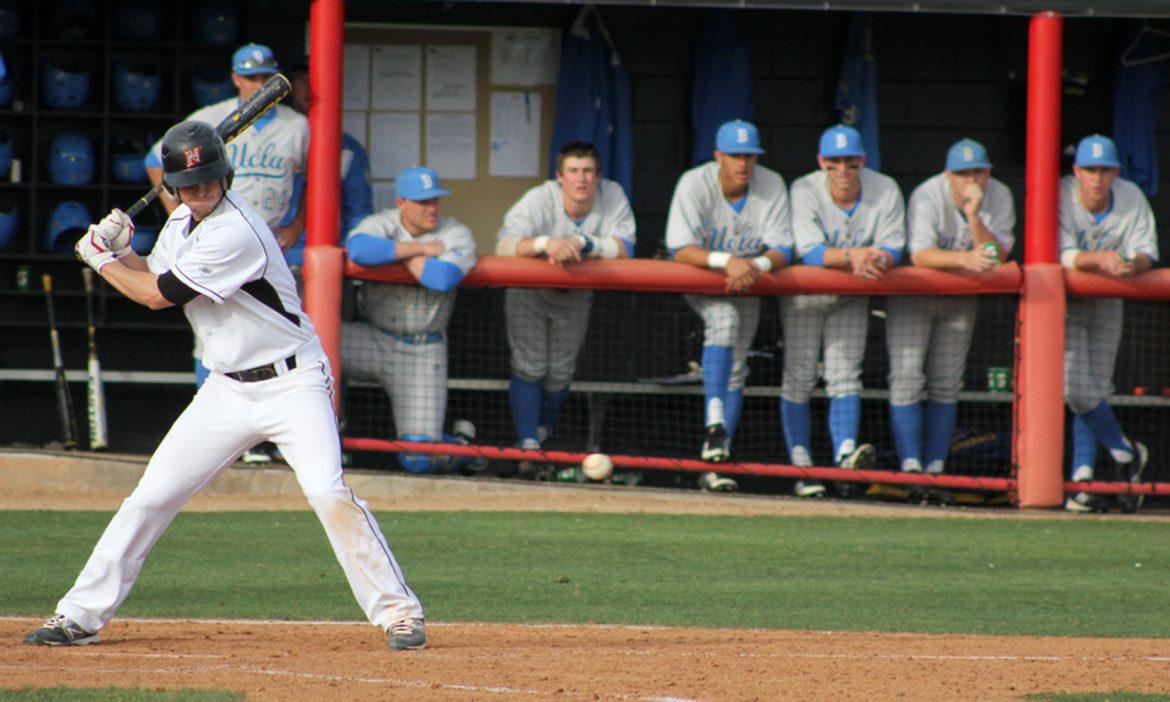 Matador Brett Balkan stares down a pitch while at bat Tuesday afternoon. CSUN will try to shake off a 19-7 loss to UCLA in a homestand series against Northwestern. Photo Credit: Michael Cheng / Daily Sundial

The Matadors may be coming off a 19-7 loss Tuesday against No. 22 UCLA, but don’t expect CSUN to have any lingering feelings heading into this weekend’s homestand.

CSUN (2-2) will play four games against Northwestern (1-2) in three days, including a double header Saturday at Matador Field.

“We’ll just have to come out everyday and be ready to play,” CSUN sophomore outfielder Miles Williams said. “We have to be ready every pitch and just play Matador baseball.”

CSUN head coach Matt Curtis watched his pitching staff get worked for 16 hits by Bruins’ bats on Tuesday and saw his relief pitchers struggle to find the plate.

The Matadors used six different pitchers on a day that had starting freshman Brandon Warner pulled after only two innings of work. Junior transfer Harper White and freshman Jacob Leyba were both roughed up for four runs and walked a combined five hitters.

“We’re in a stretch where our work is more mental than physical,” Curtis said. “Today we’re addressing the mental side of ‘yeah, we’re walking too many guys’ and ‘why are we walking too many guys?’ Generally games come down to what you gave them for free and we’re doing entirely too much of that.”

Although the bullpen had a rough day, the offense continued to find ways to get on base, notching nine hits and earning six free passes. The patience at the plate paid off for freshman catcher Alex Mercado, who was walked twice, added a hit and came around to score once for CSUN.

“I think we’re taking quality at-bats,” Curtis said. “We try to take our emphasis off of the end-results statistically. We have things that we look for as far as getting the right pitch to hit and putting the right swing, and whatever happens, happens.”

The CSUN offense has only been held scoreless once and has marked eight-plus hits in three games. Curtis noted that while the Matadors have struggled in cleaning up base paths, they have scored three or more runs in three of their four games this year, with their latest effort resulting in a season-high seven runs.

Friday’s series opener brings a Wildcat team that is coming off a 6-3 loss against Seton Hall. Northwestern took part in the Big Ten/Big East Challenge to start its season off and stole its only win of the year Saturday in a comeback over Pittsburgh after being down 11-5 through six.

The Wildcats have three players with five or more hits this year, led by freshman outfielder Luke Dauch, who has two RBI and two walks with a .714 batting average.

“Our hitting has been going well,” Curtis said. “Occasionally, we’ve been missing on the knock-out punch, but as long as we’re doing the right things going at the at-bats with the right process, it will come.”